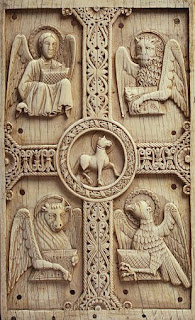 I guess I'd better be a cleric since this time I'm thinking we're gonna want some healing.

Ok, you're a cleric. Who's your god? The default god would be Vorn, grim and gaunt god of iron and rain.

I'm thinking a goddess of healing with really big tits.

Ok, how about we call her...Titivilla?

Isn't that just a feminization of the patron demon of typos and/or that guy from the Monster Manual 2? Wait, I didn't actually say that, why are you typing that?

Because it's for my blog and I am using what happened during our game to demonstrate certain principles of setting-design. So I am saying you said that even thought actually I just thought it. In fact, I am going to keep doing that, in order to keep this example going. In fact, from here on through nothing I write will be what you actually said but just a sort of conversation-formatted version of my own thought process as I develop Titivilla into an actual in-the-game setting element.

Anyway, Titivilla. She has large breasts.

Well, we all know that popular images of Satan are derived from the pagan god, Pan, and I like the implied spiritual ambiguity there. Like, is Pan a god, or a demon? Is he god to one group and demon to the other?

Well, that kind of moral relativism makes sense in your game because, y'know Vorn is the god of both McCormick's very moral paladin and Mandy's less-than-reputable tiefling cleric.

Yeah, also, I like the idea that the world is in some way suspended between the heavy, dark, monotheistic, Christian culture we associate with Medieval Europe and the sort of weird, anything-goes polytheism associated with both more eerily primeval times and the best fantastic literature. It allows you to make use of the imagery of either mode of thought.

Kickass and peachy keen! What else?

Well I worry about a healing goddess being a hippie. We wouldn't want that.

Indeed, by no means.

No sandals, no rural imagery, no flowing robes, no sort of sideline-standing, heart-warming, whole-wheat eating, non-mace-to-the-head-sending crap. That shit is dull.

Plus, people making up gods tend to get all crisp and neat about it, but back in the day, gods were like gods of all kinds of random things which seem unrelated to the contemporary mind, like, "Mischief, Pythons, and Flanking Techniques". Or whatever.

Such, at least, the impression I get from Deities and Demigods.

Ok, so let's say she's the god of healing plus also, y'know, something actually interesting...

Plus, remember, she has to be able to be perceived as evil. 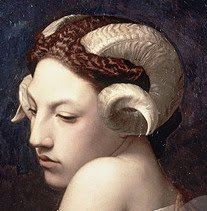 Ok, let's say she looks like a succubus, only with big curling goat horns to balance out those boobs, visually.

Why are we balancing the boobs? Can't we just tip the balance in the direction of boobs?

I feel gods should have things coming out of their heads--it makes them seem regal and intimidatingly static.

Ok. And she's a goddess of both medicine and...change, the body, the warping of the body.

So she can heal you, but she's also a goddess of mutation, illness--anything else that happens to the body.

And of course the monotheistic culture will see her as a demon of mutation, change, illness, etc.

Because in a monotheistic society, there is one god, the way you come out is the way that god intended, changes to that plan would not be tolerated.

All very philosophically consistent. We are clever indeed. But which is she really?

Who knows? We mere mortals don't need to know. All we need to know is how she's worshipped down here.

And what kind of spells I get.

Which we've established: Spells providing dominion over the earthly forms of living things.

But is there a general principle of D&D design we can derive here?

I believe there is. It relates to the principle of gonzo anything-goes-ness.

It reminds me of the technique suggested in this post.

Anyway, it seems to have worked out alright.

good post! reminds me not to take my setting creation too seriously. thanks!

Nice pic. Who's the artist?

I'd have said she has large breasts, she looks like she swallowed a watermellon, and her philosophy is...

I cannot wait for the "laying on hands" jokes.

Have you heard of Titivillus?