Three Women, Two Men, And The Eye of A Sleeping God 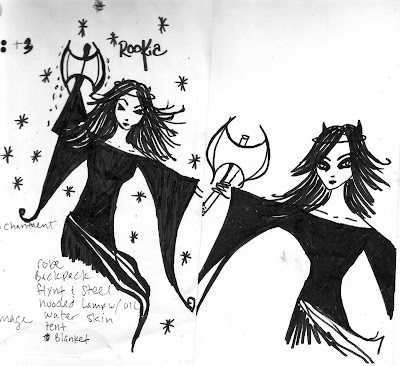 -Turns out the White Elves have found one of the eyes of the rain god, Vorn. I said it was 15-20 feet in diameter. Anybody know how big you are if your eye is 15-20 feet across? Anyway, I guess that's how big gods are in my campaign now.

-KK: "Can we take it?"
Jesus, ten minutes into her second game ever and she's already totally Old School.

-So if you remember last game ended with KK and Mandy magically siamese-twinned together. There was a ridiculously long discussion about the pros and cons of performing battleaxe surgery and then just having Mandy cast a healing spell on them both after. Didn't come to that.

-KK got bitten by a werewolf. She was totally jazzed, of course, she even drew little wolf ears on the pictures she was drawing of her character (above). I'm expecting a lot of "Rookia, we'll have to find a cure, you keep trying to eat us" vs. "But being a werewolf is so cool."-type action very soon. Hey, if it makes the barbarian role-play, who am I to argue?

-I'm sure it all sounds ridiculous. And it was--because it's D&D. But it was spooky, too--Mandy looked into the eye of her god, there was a lot of tense sneaking, and then everyone almost got killed in a crumbling church in the snow by werewolves--until they remembered about running away. I was very proud of them when they remembered about running away.

-When everybody finally got to the city, they rolled on the Extended Carousing Mishaps Table so they could trade cash for x.p.. Next session will begin with Daniel having narrowly avoided venereal disease and Mandy waking up in bed next to a dead female White Elf.

I'm too tired to supply the "art imitates life" jokes here. You're creative people, feel free to make up your own.

I think it's a gas you have a guy willing to play a PC with only 1 HP.

You make D&D sound so much more fun than I've ever had actually playing it. At least as a player. As a GM I can generate my own madness.

I like out of context DnD anecdotes, yes I do.

Remember,Zak, regarding combat in D&D. It's an abstract system. A failure to hit is actually a failure to hit and do damage. You can add as much flavor text to the melee as you like.
A miss can be a sword blade ringing off someone's helm, it can be a bloody flesh wound that causes no hit point loss, It can cause chips to fly from the edge of a shield and rattle the teeth in your mouth.
You can make the misses just as frightening and exciting as the hits,and you should.
If your players arn't looking at you wide-eyed and pale during melee, you're slacking Kemosabe. Remember the mechanics of combat arn't the limits of the game, they're just the armature. You can do whatever the hell you like to flesh the events of an encounter.

Good call by Daniel with the twig by the way. Yah gotta make do with what you got.

I let a player find a wand of eye poking once. 1d6 charges, burn off a charge and the wand will unerringly poke out the eye of a target creature. Wielder must be withing arms length of the target, and it only works for magic-users.

But can a Wand of Eye-poking poke out the eye of a god that relates to godzillas like they're kobolds?

I'll have to borrow the Extended Carousing Mishaps Table for my Stormbringer game. Just in case the characters somehow manage to survive the sudden onslaugt of zombie pirates.

EG-
I know all that, but my players also know--no matter how I describe it--what rolling a 4 means.

If they didn't. then the elegant Drama of Target Numbers would be lost, which is an important part of the tension and terror.

I fully endorse an MU doing what he can to survive. Good on Daniel; I never thought about poking someone in the eyes with a twig.

Hmn, I feel some universal law of gaming bringing on a Monty Python bit about pointed sticks. :D

Heh, I get excited sometimes,Zak, don't mind my preaching. I don't always tell the players what their target number is when they roll, sometimes I just ask what they got.

I'm used to excercising a far-reaching power of DM Fiat. In the example I gave, that chip that flew off of the splintering shield just might hit somebody in the eye, spoiling a spell, or causing a lost action.
I might declare something like that if the to-hit roll just missed scoring, or if it'll be funny.

Also, the wand of eye-poking would be insufficent to gouge the eye of a god.
For that you'd probably need the mighty Staff of the Stooges.

It may be several godzillas, but it's only 1.5 Oral Roberts Jesuses.

EG-- like Zak said, you can describe all the mortal combat you want (the sword rings out! The shield answers in antiphon! Battle is joined! Your four is pitiful & we mock you!) but really, a miss is still a miss; it doesn't alter the gamescape or narrative in any way, just eats up time; it isn't even a failure-- just a lack of success.

I enjoy your blog and commentary to others.

Here's a question: How come anytime a character ever wants to get laid, the DM feels a need to either a) inflict him with VD or b) have the woman be a doppelganger/Red Widow/other wolf in sheep's clothing (not the tree stump)? Conan never worried about VD, I'll wager...