DM: "Ok, as the guests walk in, there are female Elven guards standing on either side of the gate, and they look kind of like...this": 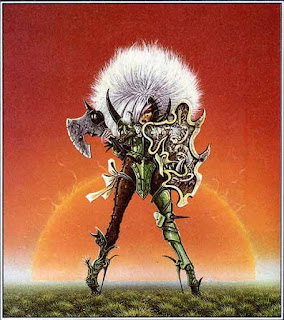 Player 2: "Those are really great shoes."

Player 1 is Satine Phoenix. Player 2 is Mandy Morbid. Player 3 is a guy and says nothing.

So, I'll stop here and I'll answer the kind of question that gets discussed when the issue of Women In Gaming comes up.

Zak, how do your own personal feminist female players feel about the often hypersexualized depictions of female characters in games?

They like it. They feel good about it. They are 14-year-old-boys about it.

_______
I asked Mandy about the whole "bust-waist-hips-chart-in-Arduin" thing.

Mandy: "Well I think it's alienating to some women, but not to me. I'd totally roll on that chart and think it was hilarious." 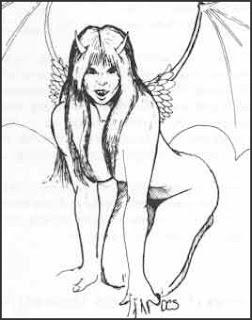 Mandy: "I think she needs to be hotter. She's all hagged-out. And her hair is gross."

Me: "What about that Reaper Mermaid Mini?"

Mandy: "She has nice tits and a small waist, plus if you turn her around she has a big ass. You know who was really hot is that Guild Wars Necromancer. There was a life-sized cut-out of her outside the game store when I was a kid. She has nice hair. But my necromancer was even hotter than that--she had better hair and she was wearing less clothes."

Me: "Your necromancer? You mean in Diablo?"

Mandy: "Guild Wars. The Amazons in Diablo had big tits but the necromancer was kind of hotter."

Me: "What do you think of this article?"

("I Was Teenage Con Bait" on rpg.net)

Mandy: "I didn't have low self-esteem when I was a teenager--that wasn't one of my problems. I never felt that my body was the only worthwhile thing about me. I can't relate to this woman at all. I mean, how do you know that those girls aren't really more comfortable in a chainmail bikini than a turtleneck and jeans? At that age, what made me feel insecure was when people told me to cover up, or to stop talking about sex--or about anything else."
______

We all know why there are these guards--there are guards so you can get past them and get treasure. In this adventure, getting past the guards was not meant to be the main event--there was one guard near the door, and she was tipsy.

Satine distracted the guard with her feminine wiles (opposed charisma v. wisdom roll) while the other players knocked the guard out. Satine liked that so much she drew a picture of it while she played:

So this is how my players are.

One more question on the subject:

Me: "Mandy, do you think male characters in heroic RPGs and the like are sexualized? I mean, to you, whether or not their creators meant them to be? Conan, Aragorn, Legolas, Elric, Spock..."

Mandy: "Yes. And Han Solo...if you want another example."

So, yeah, chainmail bikinis are ridiculous. But so is the mostly naked movie version of Conan.

"Y'know another thing that makes Conan sexy? It's the slave girls. That's an important part...I think I might have to buy that chainmail bikini that's at Bed Behavior..."

P.S. Mandy's still looking for monsters and things to put into the adventure she's writing. So if you've got something, let us know.

Oddly enough (or maybe not), I think these comments reflect what a surprisingly large percentage of well-adjusted, sexually comfortable, no-emotional-baggage women with a good sense of humor might say, asked the same questions. I've got 4 women in my gaming group, and pretty much they'd all say about the same thing.

And that sketch is amusing - I love it when players enjoy what's going on enough to do little doodles / cartoons reflecting the game.

I find this very interesting.

I had a very brief period of gaming with a couple of women. They definitely were not like yuor players, Zak and Blair. One wanted to play one of those hot, green-skinned slave-girls from Star Trek, but then didn't want to do anything with it. She was uncomfortable when I had male NPC's trying to flirt with her. Of course, her husband was in the game, so maybe I was uncomfortable too.

To put it in a frame of reference, my SO has played two very memorable characters (she has played many memorable characters, but these two are appropriate for the discussion at hand). One was an enormous Scottsman who had a maxed-out Seduction skill and social attributes out the shillelaghwazoo, who would shag anything that'd hold still long enough for him to get his kilt up.

The other was a Dragonlance-style High Ogre/Nymph hybrid (this was a weird game) Cleric who would cast the Shillelagh spell on his/her (High Ogres can shapeshift) "club" pre-coitus, and would likewise knock boots with anything...and I do mean anything.

She might win the blue ribbon for bawdy humor in our circle, but none of them are beyond cracking perverse jokes or displaying lewd behavior in game. But at the same time, they are all well-adjusted, "normal" girls.

I guess all I'm saying is that while Mandy, Satine, and Caroline's comments might seem a little out of place around some people's gaming tables, they certainly wouldn't be around mine, and none of my gaming girls get pervy on camera for a paycheck (that I know of...). So their attitudes might be a lot more "normal" than a lot of people might think.

My gaming groups have had women in the since, well, forever. Most of them are what's considered normal (albeit a bit nerdy) women with good self-esteem, good sense of humor, and a sex & violence tolerance threshold comparable to any male player. Some of them are more into "feminine" stuff during games ("What kind of dress is she wearing?" "Is he wearing a ring?"), and some of them even out-nerd some of the guys when it comes to rules-stuff, and competitive power-gaming. Games that have female players are also a bit more character oriented, whereas all-male groups tend to concentrate on the explore-kill-loot -aspects of the game, but this isn't a general rule.

funny...I worked on Guild Wars, and even did some of the emote animations for that necromancer. We have that stand-up she's talking about all over the office. Always nice to see the appreciation, especially in unexpected places.

moonlapse--
send us one and we'll send you free movies. or something else if you want it. it would make mandy's day.

I can probably hook you up. Just give me an email address or something and I'll let you know if I can dig up a spare.

This is my new favorite blog.

hehehe. my wife said pretty much the same thing as mandy. forgive the oddly timed comments...i'm catching up...

Did that adventure Mandy was writing ever happen, by the way?

I have had multiple female players demand slave men - 2/3 times black by choice, one player had a herem of eunachs - judging by ads for women featuring chocolate, black masseuses in Australia must be a normal fantasy. A few guys were uncomfortable for a bit.

Only stupidity is insidious.