Well that went ahead and won another award: the Three Castles Award. This one is very special to me personally not just because it has a nifty trophy... 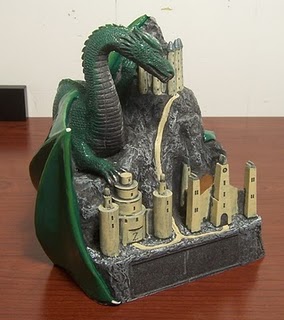 ...but also because the judge panel is fucking amazing this year and consists of names I've known ever since I was a wee lad and first started thinking about going into dungeons to kill dragons:

Dennis Sustare--as in Chariot of Sustarre, the most badass druid spell in AD&D--who invented the class
James M Ward--who did Metamorphosis Alpha--the first sci-fi RPG. And who I've heard from multiple sources is literally the best GM in game history.
Zeb Cook--Whose name I know best from the cover of the Oriental Adventures book I read over and over and over and over and over as a child.
Steve Winter--Who did a lot on FASERIP, including the best superhero sandbox ever.
and Steve Perrin--As in fucking RuneQuest.

That's an amazing slate and I'm honored that the people who added druids, laserguns, ninjas, rebel superheroes and die mechanics that actually make sense to RPGs even read Red & Pleasant Land much less decided to give it an award--especially considering the other nominees this year were hella impressive. 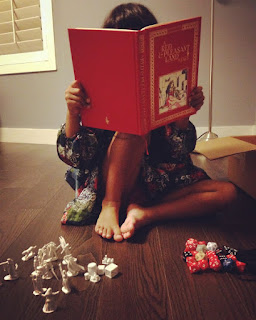 Let's hope in a couple decades she writes a game and I get to be on a panel giving her an award.

PS if you don't have one and are going to Gen Con, LotFP, the publisher will be there. Though copies do go fast.

Those of you wondering about Black Metal Amazons of the Devoured Land or Amazons of the Metal North or whatever we're calling it--we're working on it: The girls modeled as the amazons for the paintings I'm doing, here are some pics from the shoot: 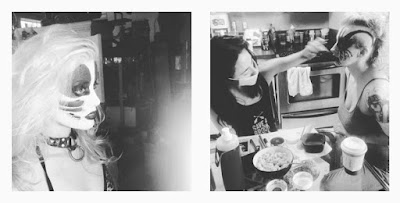 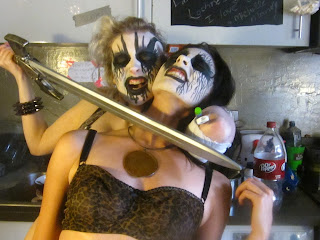 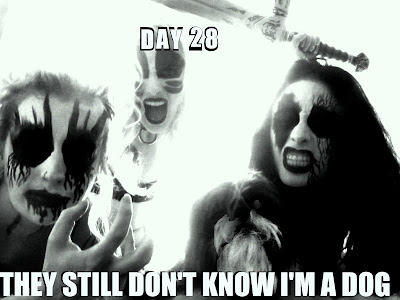 Maze of the Blue Medusa (Yes, I plan to do a book for every color in the goddamn rainbow) is now physically manifest and I am pleased to breathe a sigh of relief and note that neither man nor machine has ever devised a finer-looking megadungeon. Not empty boasting, check it: 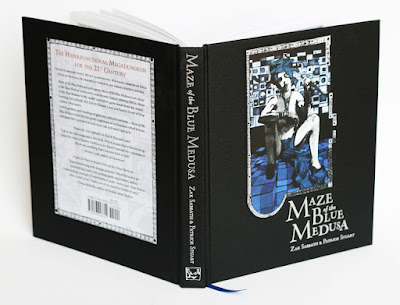 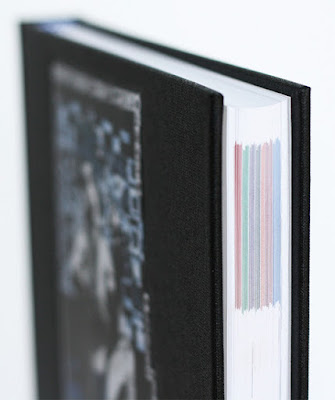 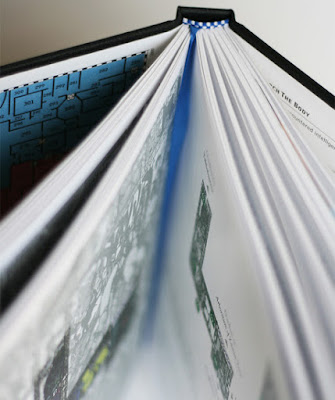 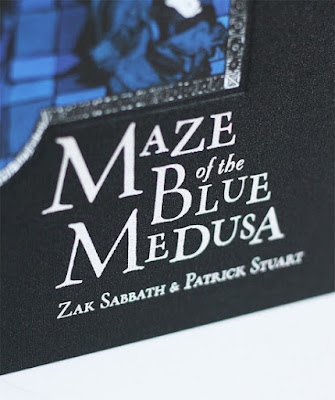 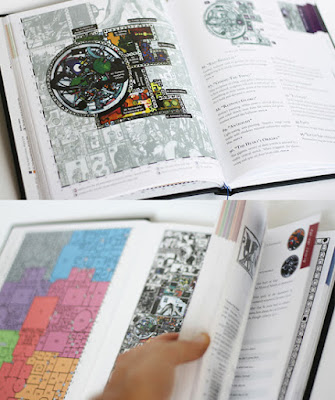 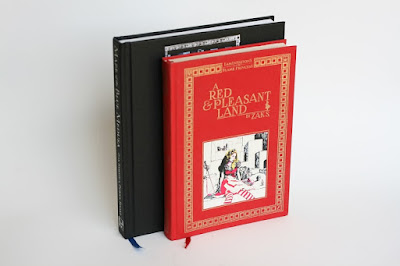 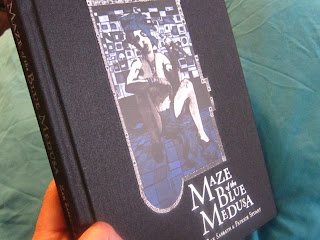 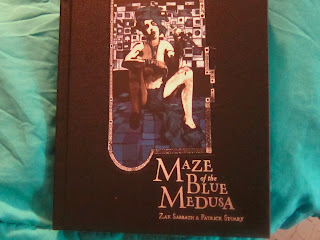 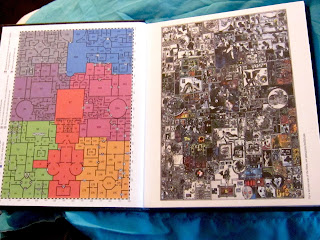 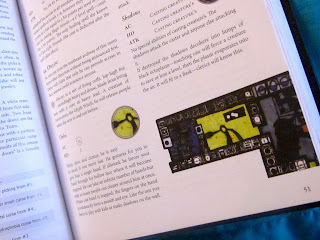 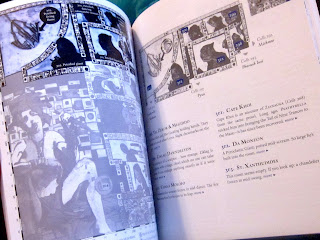 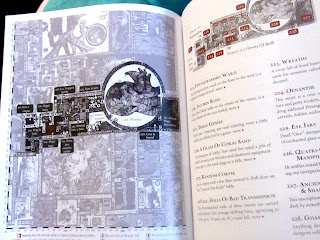 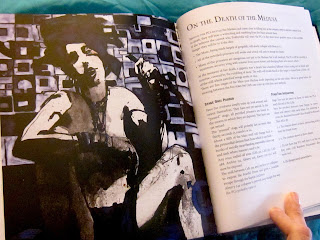 Also, if you want to play it at GenCon, hurry up and sign up. The games are being run by Ken Baumann,  Satyr Press' publisher and actual real-life tv actor and he's been hilarious and clever in every game I've ever played with him and cracks everyone up.

Here's an actual-play report. And a thorough review. 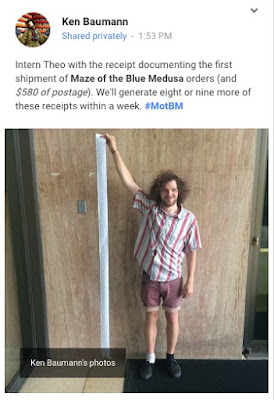 There will be copies at GenCon but like they will probably be gone in seconds because they're heavy so each vendor can't really carry that many so you might best just order one.

There might be a few expensive signed copies available, too, maybe. If you're into that sort of thing. And if you get an early flight. Stay tuned to this blog for details.

Some stuff about Project Four:

-Project Four is secret, because it will be the subject of a major and official announcement by a big game company.

-Project Four is going to make all the right people incredibly upset when it's announced. Before they even read it.

-Project Four is taking up all my time right now which is why I haven't been posting much.

-Project Four has two main creative people on it, both doing writing and art: me and a woman whose work I've admired for years.

-The necrophilia was her idea.

-Project Four is weird and experimental.

-While writing Project Four I checked into a hotel. Next to the bed was a bible and a copy of Keith Richards' autobiography. I consulted both a great deal.

-"Wherefore a lion out of the forest shall slay them, and a wolf of the evenings shall spoil them, a leopard shall watch over their cities: every one that goeth out thence shall be torn in pieces: because their transgressions are many, and their backslidings are increased"

What are the chances Project 4 gets announced this year?

Can't wait to hear more about those Metal Amazonians and their land.

Given semi-recent Twitter chatter, my conjecture is that the Project 4 co-creator is the inimitable journalist/illustrator Molly Crabapple. What these two could be working on that is game-related, I couldn't possibly fathom, but it is surely destined for greatness.

All fascinating, but what *color* is project four?!? Some of us are trying to design library space you know.

I will put my guess for the name of Project IV here : A Green and Calm Sea (aRaCS), a Nemo meets Cthulhu setting for CoC.

congrats man. the three castles trophy is dope, and the details behind it even more so.

pretty pumped for those upcoming gigs too

Ken Baumann also has awesome customer service skills. I had some issues with the pre-order and he sorted them out for me in a quick and friendly fashion. Eagerly awaiting MotBM

BTW sorry a little late here, but the three castles on the sculpt are meant to be Greyhawk, El Raja Key, and Blackmoor, the three first "megadungeons" ran for D&D players in the 70s.

technical question, do you use Adobe InDesign to create the layouts for your printed books?

I bought Maze of the Blue Medusa. Hardback is in the mail, deluxe PDFs are melting my brain. Outdamnstanding. The little drug-spouting elephants are my favorite things ever. Can't wait to see Amazons and Project 4.

Really enjoying blue medusa, different to anything I've seen before. Looking forward to amazons of the north, great expectations are beeing had. Musings re. project four: If it's going to out there; I'd love to see you collaborate with Cook/Germain.