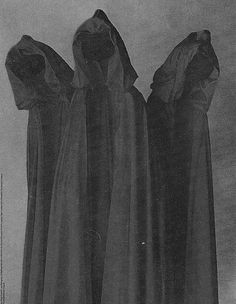 Cult of the Cold White Flame
These elves think that life (as in the actual years) comes from a common fuel (the fat of Istykk, the first beast) and that each life is a flame burning up this fuel. So over time they evolved from sort of Greenpeace on steroids into a full-on assassin cult and then into a going concern. They take young elves from their cradles at the age of 50 and train them to, for a modest fee, take life unworthy of life, leaving more for the worthy. A formidable political force at this time.

The Hundred Utter Bastards
Illegitimate offspring of the Negatsar, clockwork lord of the Chaos Wastes. Spymasters all, immortal, immobile and alcoholic.  Each knows one word of the sentence that would undo the world. They communicate via pastries containing missives.

The Scattered House
Originating in the Exotic East, these seekers gather arcane wisdom from all nations. No member may stand in the presence of another and live--a bylaw which contributes to their organization's global reach. Their surreptitious and labyrinthine scroll caches are guarded by mechanisms and things without minds.

The Touchers
Formally called the Haptic League. A society of enthusiasts, collectors of sensations. It is said that, in aggregate, they have touched all things, from the ears of the Bloat Leviathan to the hidden lips of Agricola Pork, the Foaming Slut. Their various archives include not only descriptions rich in the language of the tactile, but detailed (if less ecstatic) records of sources and methods exploited in order to accomplish members' more audacious feats of palpation.

The Catafalque
Art historians and literary critics--mostly male, mostly gay, mostly human, mostly native to Vornheim, mostly upper class, secretly dedicated to protecting the city-state from the depredations of foreign intrigue, generally on cultural grounds, but occasionally also in the interest of preserving the city-state's relatively (very relatively) egalitarian traditions. Kind of based on the Cambridge spies, but nicer. Usually. To locals.

Temple of Quiet Sliding
Briefly mentioned in Mei Lung Chen-Shan-Tien-Kung-Te and Michael Pondsmith's Kara-Tur Volume I, these esoteric geometers believe that by initiating certain subtle spiritual and geological realignments they will bring about….something. No one knows. They spread their doctrine through a curiously absorbing form of shadow-puppet theatre known as The Anathra and are masters of the sinuous and deadly arts of the Sleeping Hook.

Pitchkit and the Fuckwads
A mercenary company of ill-repute, consisting of the titular Pitchkit--a fighter deeply eloquent in the saltfish poetry of the lower city, a traitorous thief, an arrogant wizard, a drunken dwarf,  a sanctimonious cleric, and the inimitable Gutboy Barrelhouse. They carry a dizzying variety of dull but useful magical items, advance at exactly the same rate as the player characters and are fond of choosing the same targets. At the first sign of genuine trouble, Pitchkit will flee and attempt to recruit new Fuckwads to fit the roles of his soon-to-be-departed comrades.

Pack Slathering
987 gnolls of the fearsome subpolar strain, now led by Heavy Sister and Twinspine. Tales of the pack have driven children home before dusk for three generations. They eat whatsoever they behold and weaponize whatever they can't digest. They wield barbed whips of entrails, howl from mountain peaks, and love naught but gold and Demogorgon.

Société Gustatifs
These gourmets of the Upper City bankroll expeditions to all edges of the cube--from the cliffside inns of the frozen Kraal to the renowned and sweltering breakfisheries in Drownesia's Bay of Ugly Fathers--in order to maintain and update their esteemed Guide de Cuisson et Tavernes dans le Monde Entier. Their monomaniacal project is to leave no recipe unrecorded, no rarity untasted, no chef uninterviewed and no tavern unrated. Contracts from the Société are well-paid and highly prized, and parties hoping for a commission must possess the survival skills necessary to reach the uncharted eateries at the edges of the world, as well as at least one member able to read and write and at least one whose palate is refined enough to pass the formidable Test of Seven Sauces.

The Unmated Glove
A alliance of theatrical advocates, intercessionary priests, pig whisperers, trial gladiators and other lawyers dedicated to increasing demand for their own services via the covert and widespread initiation of personal catastrophes among possible clients. Their agents (known as Ruiners) move fences, dry wells, destroy marriages, embezzle funds, frame partners and generally make life arbitrarily difficult among such classes as are able to hire professional legal representation. As their activities are profoundly illicit and the variety of contests required by different branches of Vornheim law are near infinite, the organization's members have both the motivation and the skillset necessary to resist nearly any attempt to unmask them.

Cool ideas! And I can't believe you brought up Gutboy Barrelhouse. Reminds me of that Raven's Bluff character O.G. Mekillem.

Very cool! We may need an illustration of Agricola Pork... :D

"inciters of weird boners"...reminds me of a certain chrome plated pig with marital aids stuck all over it's body.