1ST:
My D&D book--Red & Pleasant Land is going to arrive back from the printer Thursday or Friday, at which point it will be available to buy from here. It's something like 200 pages Some preview pages... 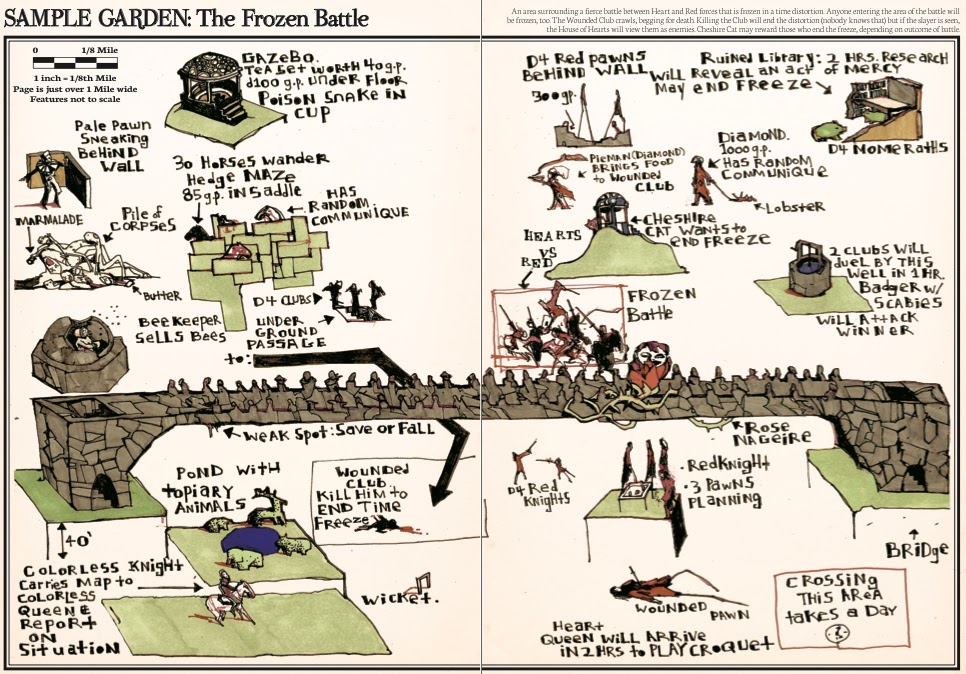 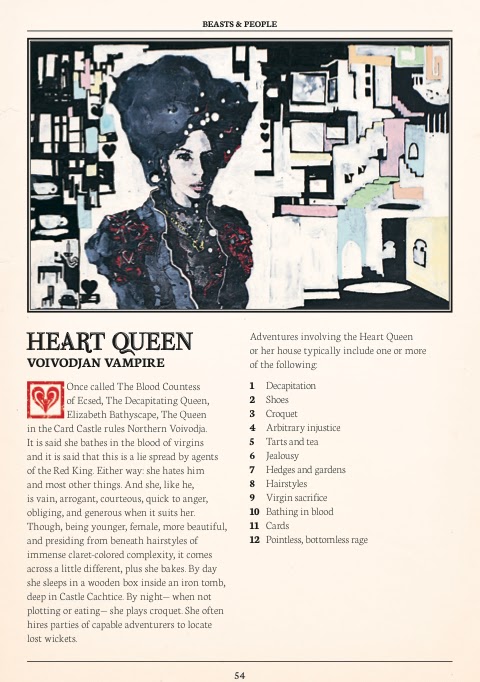 More on that project here.

2nd:
I was going through my 5th Ed Monster Manual, fixing it up. These entries are grouped under this here tag.

Today's monster, the Animated Object is entirely suitable for a Red & Pleasant Land game, both being pretty Alice In Wonderlandy… 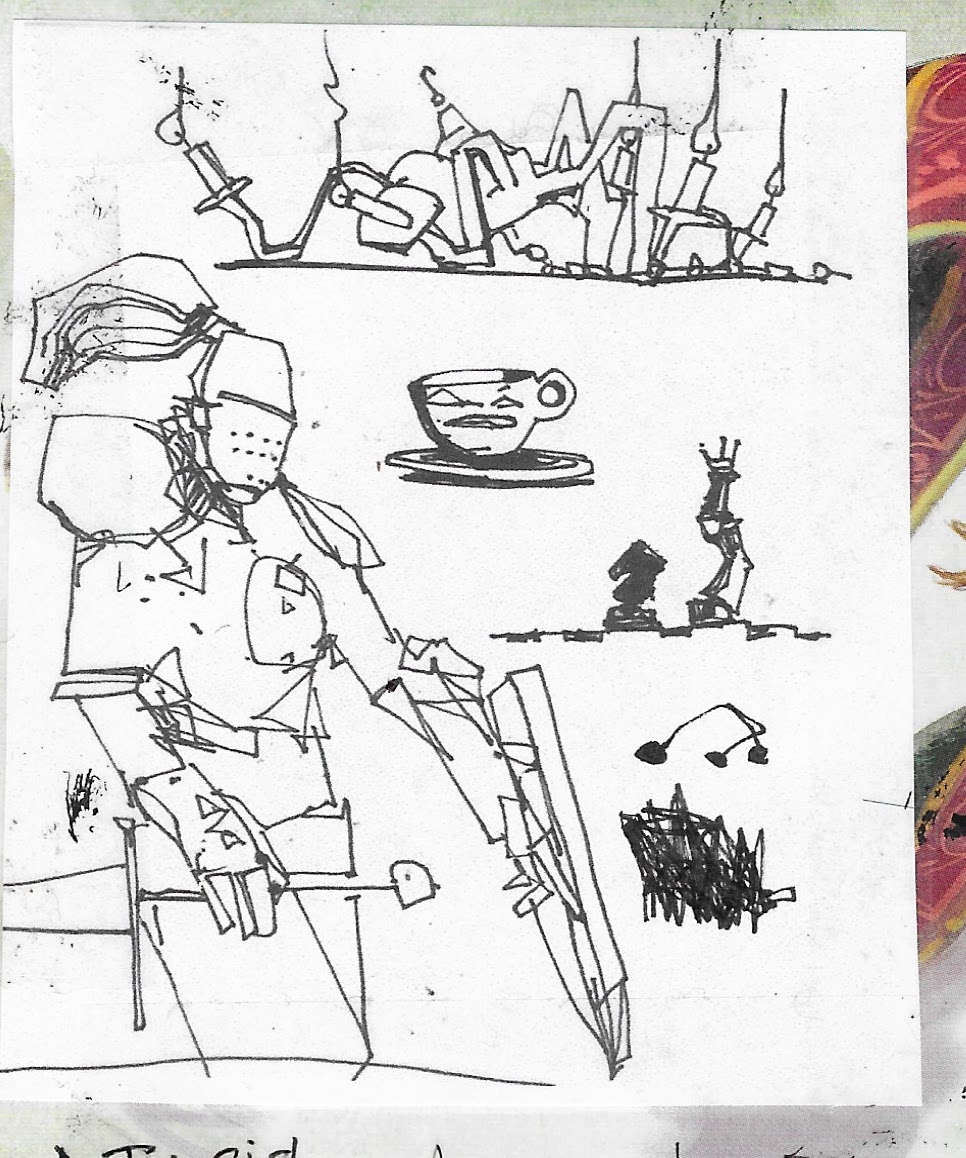 The thing about Animated Objects is they get goofy real fast. In the 5e Manual they've got animated armor (which is fine, sure), flying sword (guh), and rug of smothering (kinda dumb but the mechanics are fun because it's hard to get your friend out without accidentally stabbing them--which the rules acknowledge).

A good animated object scene is at the end of Willow when Bavmorda or the goat witch accidentally animates the table and it's all wrought iron and creepy.

In addition to the Donald Barthelme passage--which I think is more about the psychology of the psycho wizard who makes animated objects than actual animated objects--I also tried to list off all the good ones:

. Chandeliers: Man, the chandelier is the whole package--attacks from above, crawls around like a big lobster, sets you on fire, multiple attacks including grapples. Don't fuck with chandeliers, man. Still a little goofy though.

2.Teacups on the other hand suck. They're just included because in any situation where stuff starts talking teacups seem to talk a lot. I gave them Int 16. Maybe teacups are smart because they're always listening while people chitchat.

4. Axe: I figure it  has a real big blade and rolls across the floor. That's not too goofy.

5. Lantern: It rolls up, then explodes.

6. Bola: The step over themselves like daddy-longlegs then hurl themselves at your feet as you flee.

7. Clothes: Sounds silly at first but this is actually pretty horror movie if it animates the clothes you're wearing--or your hair.

9. Bottle: It rolls up and explodes, too. Maybe spraying you with glass.

10. Shoes: Again, if you're already wearing them: horror movie. You will pay an executioner to cut off your feet.

11. Jewelry: I figure jewelry is a stealth killer. You find it in some pile of treasure then it waits until you're asleep and rips one of your nostrils open.

12. Belt: Deserves a special mention because it can cut you in half.

14. Pack of cards: They probably just know stuff--like who won all that gp in the last poker game. Plus paper cuts.

16. Orrery: They roll up and grab you like a bear trap.

17. Net (with hooks): a little less goofy than a rug of smothering.

19. Glove: Lie low until they make you cast the wrong spells. 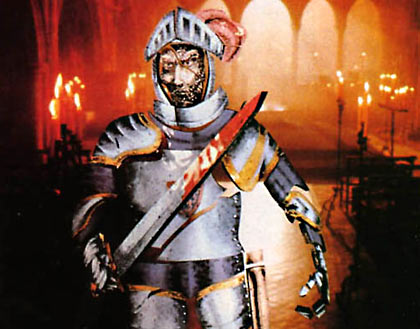 In our game, we actually had magical chess pieces scattered throughout a dungeon.

If animating an object is a magical working, then I figured that chess pieces were each individually imbued with the same amount of power that it took to animate anything else. That meant getting a full set of them together concentrated that power into something a little more epic.

The pieces come alive, each with intelligence and knowledge related to their station.

So: Knights will know where in their dungeon the good weapons are; Bishops will know the divine secrets; Rooks will know the fastest routes around and the strongest and weakest defenses; Queens are dominating and imperious and boss you around; Kings are feeble and infirm (and may gibber out the really good secret knowledge, albeit badly garbled).

They are indestructible, but will suffer injuries which revert when their little slain bodies are removed from the board. When the game is played, they accept verbal commands (Like: "black knight 2 to queen 4") and taking a piece is a small fight and then execution. The blood from these slayings is a spell component for something. It will soak into the board, so get it quick.

They don't follow the polite rules of checkmate, theirs is a mortal game. You win when your piece slays the king. If the board drinks enough blood from the Kings, something really epic happens.

Thank you for this.
I'm a large fan of haunted and animated armour. Re: that, this is very good: http://longforgottenhauntedmansion.blogspot.ca/2013/12/armor-gettin.html

16: Animated picture: invades your dreams, makes you do tucked up things for it (needs list of fucked up demands)

17: Animated writing feather: makes you unwittingly write insulting profanities.... does it for its own mild amusement.

our campaign had a cursed item similar to your picture suggestion. It was a portrait of a handsome elf man, who would appear to speak to, charm (magically) and mentally seduce a victim in the party.

The longer they were in contact with the portrait, the more the relationship became dangerously addictive, and their will slowly drained away.

Sort of like Narcissus staring at himself in the water until he starved.

Wine in a wineskin. Like a mini water elemental you drink.