Editing new I Hit It With My Axe episodes...
…plus running an online game where like the players are sailing and ran into a floating libraryship and chaos pirates simultaneously, so it's hard to keep adventures straight in my head, so I might be writing this short actual play report more for me than you but here goes…

After teleporting away from the vampire, Charlotte cornered a local woodcutter in a hidden village and--after asking about his woodsmanship and how good he was with wood and generally just doing that a lot because that's how Charlotte is, got a hot tip that the Red Knight of Tiamat had been seen menacing a nearby poet. 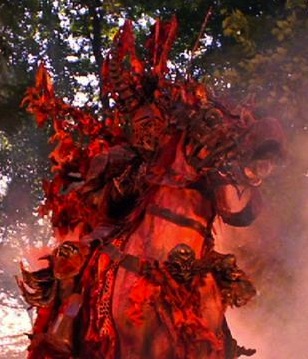 The ladies decided hey why not fuck with that, right?

So after putting the woodsman and some villagers to work making catapults, they headed to the Gardens of Garvalde--in the center-right here:

They hunted about and found a passage through a door that lead beneath the earth, then saw a vasty murky pool  in which floated what appeared to be and was not leopard-printed, giant, moist ravioli. It was stinging giant jellyfish floating and the the wizard incinerated them because lightning does double damage to submerged creatures.


Beyond was a sitting room, with all the furniture on the backs of old, slow turtles, happy to see anyone after thousands of years of unacknowledged service in the deep and cushy dungeon. And happy to help.

(Turtles, by and large, make poor villains--turtles are eager to help, and grateful for love. Think of Mario--the idea of an evil turtle is just funny.)

Anyway, luckily for the dramatic arc there was a demon-summoning room beyond. And luckier, the players decided to sleep in the turtle room, instructing the turtles to warn them if anyone approached.

Mandy, still playing an Alice and an inch tall due to a diminishing confection consumed a day before, slept in a drawer and got awoken by a rattling sound. "Pardonnn," said an old reptile, "there appearrrrs to be an individ-u-allll skulll-kingg abouuuttt…"

The skulker turned out to be a summoned demon--it grabbed the party cleric and demanded the others go fetchquest the poet.

Anyway, while the cleric and entrapping demon flirted via parts of Mariah Carey songs (what the fuck, This Session?) (Long story: basically the cleric kept trying to entertain herself without rolling any dice) the wizard and the Alice found a bridge, with three Red Rooks.
They froze Stokely's wizard with a riddle about something found in a mine and entombed in wood and never comes out and but everybody uses it anyway. Luckily the Rooks didn't notice the inch-tall Alice so couldn't riddlefreeze her.

After Many/Alice pulled an aborted backstab attempt and getting knocked off a bridge this unbelievably goofy fucking day was looking like a possible total party kill:

Alice was an inch-tall, had fallen 40 feet, and was a bad die roll away from zero hit points. Stokely's wizard was paralyzed by a riddle she couldn't answer and the cleric was far away in the 9-armed embrace of a nameless demon who scalded her with unholy water whenever it couldn't think of an awkward R&B reference to counter her only slightly less awkward R&B reference (Moriah is her patron goddess. Which I suppose I need to get to work on. Still smarting from having to work Captain Beefheart into the theogony.)
…I think actually just to help Mandy with some stuff but everyone was like Holy fuck laney help!!!!! So she did. She ranger-sneaked through the grass on her Mome Rath and made off with the poet, just as Stokely managed to figure out her riddle (Highlight to see the answer: pencil) and quickly fended off the next one (the answer was the letter M, can't remember the question).

So that's good--next week I suppose they'll hunt the Red Knight in earnest. Or some other thing I have no idea it's not like players ever do what they're supposed to.

It's my birthday this week...

...I also got a 3d pen, some legos, the Book of Vile Darkness (I think the actual one), and Kirin of Women Fighters in Reasonable Armor got me Hawaiian chicken and Connie won first place in a stripper contest and I got a nice note from Scrap Princess:

People are calling him transphobic or passing on that other people are saying he is transphobic without checking that out.
Which is shit because
a) It's a fucking lie
b) Transphobia is something that is bad and important and as a transperson I fucking hate you if you are using it to shore up some shitty argument you are having. Show me why you are saying this so I can know and make effective decisions or all you are proving is transphobia means fuck all to you

In the category of Birthday Presents For Everybody that link also goes to some other Scrap inventions which you should check out if you like Vornheim, there's

8.  Agent Provocateurs , misdirectors and sowers of vast suggestions of conspiracy. Editors of history and archeological vandal, defilers of vaults and tombs. What for? To always confuse the actual history of the world. They do not know the true history,but just know it never should be known. The possibility of It gnaws at them. The founder knew but took his own memory before starting the guild. This is one story. Others are told. Like post-modernist but even more neurotically driven.

Also, y'know the release of 5th edition has made Jeff start blogging again and Deep Carbon Observatory is the probably most avant-garde RPG product since ever and you should buy it to encourage the brave and spite the wicked.

Rock indeed! Today I got my first Motörhead album (Ace of Spades) and clothes for my to-be-born son and yesterday I had a blast session and just now I watched Firefly with my wife and I got Interstellar Mayhem and I painted the ships and I read your article. Sometimes it's more than I can handle. Blammo!

I dig your maps. I dig your content. I dig Charlotte's overanalysis of random 0-level npcs. I dig the Mandy plates. But I really, REALLY dig that color-coded encounter chart!

Happy Birthday to you, friend! Many many more!

I KNOW someone has asked this before, but I can't find the comment. Where oh where do you get that swank graph paper Zak!?