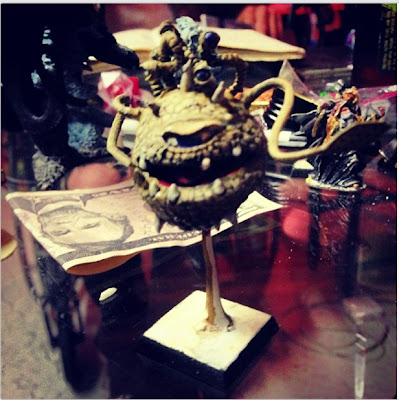 First day after the big victory.

Mandy's after-action report in italics, me in regular print:

Survived today's encounter with a beholder

FINALLY GOT TO USE THE BEHOLDER MINIATURE!!!

GOT TO USE THE CRAZY WIZARD THE OTHER GROUP LEFT ALIVE!!!

Developed big glowy stag eyes and hooves to add to my horns and claw-like fingers.

Found out Tizane is the daughter of Belphegor the Beast demon of Envy and a long dead Sister of Vorn called Brunehilde. Asked the Wyvern of the Well.

GOT TO USE THE RANDOM DEMON ATTRIBUTE TABLE!!!

Got a fancy house in Vornheim with servants and shit and all the important people are afraid of me.

My clone however did not survive the battle to save Vornheim.

Had an amusing conversation with the Masticators.

THEY RESPECT 14TH-LEVEL TIEFLINGS THAT ROLL WELL ON CHARISMA CHECKS!!! 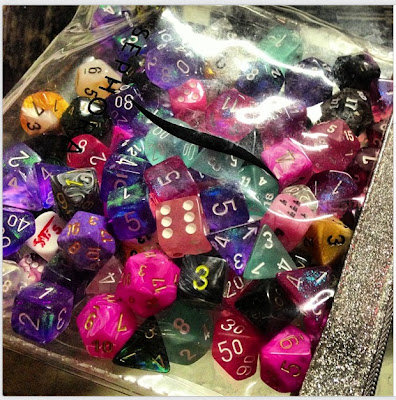 Hung out with Anaxorchas for a month with no ill effects. He told me dad has 3 heads, a stag, a serpent and a crow. I do look a bit like him apparently.

Found out dad's in league with Tiamat and that in my second adventure ever I prevented him from being summoned. Oops.

The witches Thorn, Dread and Frost work for him and Tiamat. Anaxorchas is cool with dad but has beef with Tiamat. The witches have been out to get me for ages. They each need to be killed 3 times to stay dead. I've gotten 'em or one at least once so far.

I'd rather it were me who summons Belphegor. Fucking upstart witches.

I now absorb bits of souls when I heal my friends up from zero or resurrect them. Anaxorchas approves and dad would too.

THIS IS A WEIRD DYNAMIC.

Resurrected our highest level wizard Brian the Slayer of Ferox the Incinerator after he got in the way of a death ray while us clever adventures ran the fuck away.

I WAS LIKE FUCK THERE GOES ADAM...OH YEAH THEY HAVE RESURRECTION NOW!

That beholder is sleazy. He looks old and gummy and like he's just about to wink.

There is not enough of this type of high level gaming done. I think the highest I ever got a character was 5th level after almost 2 years of playing, and most high level play I have seen fizzles because it is just the same low level grinding with more hit points to grind down. High level if done right should be inherently reality-warping chaos! Sounds like you've got the right style of DM and players to pull it off.

Curious if at high levels as the DM, do you switch to rewarding the XP by objectives the characters meet, or something similar, to keep the book keeping and planning down? Or do you try and balance CRs out, and have the characters mob grinding xp?

I give XP for treasure and monsters, and once in a while there's a rare goal reward.

Its a way of saying XP in a game/campaign comes mainly from the CRs of the enemies and encounters the party faces.