Entries marked with a * are variations/extensions of the entries above them.

1, Foes rely on each other for completion of a multipart plan--if all foes die/are stymied, it's even worse for the PCs than if the foes' plan went off perfectly, so the PCs must carefully decide which to bump off.

3, Essential key to essential area isn't there, it's somewhere else in the adventure

4, *Roaming monster has it

11, *-Shape is sacred to inhabitant/architect culture

12, *-Shape is worked into decoration of rooms

13, *-Shape is present by omission (nobody in the dungeon has a hand, shaped like left hand, etc)

14, Monster is only way to kill another monster

17, Trap, once sprung, has key to important bit elsewhere in adventure. Success requires springing it

19, Haystack puzzle--there are tons of monsters, one has the thing

20, *Narrowing haystack--each defeated monster offers one clue to next monster

22, Monster only reappears worse when it dies unless some vital thing is done besides just hit it

23, Something that doesn't appear to be a map is one

24, Nonhuman intelligence (goblin, demon, etc) is expressing itself. What it thinks is very clear (verbally or leaving a note), but it only makes sense if you know/remember about their culture/mentality. For example: when an ogre says "food" it might mean something else…

25, *Ancient "emoticon"--turning message sideways or upside down makes sense of it. Show players a picture.

26, Picture clues: there's a specific and detailed picture you show the players, with clues in it. Noticing them reveals stuff. 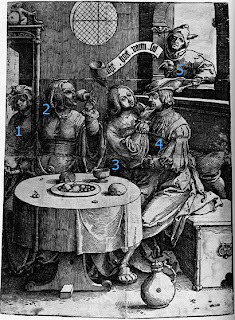 27, An apparently random agglomeration of words uttered by some NPC (dying? insane?) is an address

28, Some monsters can get through a door, some can't. The players may notice all the ones on one side or able to traverse it have some distinguishing feature/mark--mutilated ear, etc. Doing that allows you through.

29, A given color is always an illusory surface with something through it/portal to another world

30, *"Key" color shifts round color wheel, so the first is red, then the second is orange, then yellow, etc

32, Lock/door responds to quantifiable element of character (age, eye color)--the closer to the desired value, the more the door/lock/gate etc responds (one door opens, two doors, three) because of some flaw in the manufacture

33, Monster is actually part of a monster. Make it a whole by combining monsters. It must be whole before it can be killed.

35, The weapon you use against the monster changes the nature of the monster.

36, Deducing the creature's mission allows you to predict its actions. Predicting its actions is the only way to avoid or kill it.

37, A thing changes states: from trap to monster to treasure to clue etc. Observing the pattern allows you to stop the cycle at a desired moment.

38, *All monsters of a given species do this as they die--the trick is to kill them at the right moment

39, Creatures or mechanisms identify creatures by behavior not appearance. Can be fooled.

43, Magnetic trap not immediately obvious as magnetic trap, especially to victims in armor.

44, Babelfish/Apollo 13 trap: problem, apparent obvious solution, each obvious solution creates a new problem, until the chain finishes. Things needed to solve the problem are scattered throughout the location.

45, Killing monsters or taking treasure creates a problem--some subtle area denial weapon like gas or oil or disease or undead is released. This isn't noticeable immediately but the more you adventure the harder you make it on yourself.

46, The large door mechanism's broke: you have to do some precarious thing while someone else in the party does some other precarious thing in order to open it. Of course while you're doing that the monsters come.

47, You need to kill the boss monster but leave some vital part intact, so certain attacks are off the table.

48, Drowning or other slow area-denial trap made by accidentally flipping a switch in a big machine-room--fixing it requires realizing some unobtrusive object is a missing part.

50, PC failure in a certain zone/room disproportionately strengthens the enemy, so the choice of battlefield is important. (Like: dying on level 1 adds a head to the hydra)

52, *Rickety floor but enemies can fly

56, PCs' predicament requires capturing a fierce foe alive or else they die.

58, Hunting foe can hide/move through a specific kind of object--can come from underneath a rug, through any open window, etc.

60, Physical space mapped to chronological space--i.e. going up or north goes forward in time, going down or south goes back in time, etc

64, Friend and foe's situation mapped to each other--hurt one, you hurt the other, etc

65, Two foes' situations mapped to each other. Foes aren't in the same place.

67, Environment is fragile/destructible (made of spider webs, etc)

68, Foe/place has dominion over common weapon element--fire, steel, etc--that weapon, if used, will turn on user

69, Ghost or whatever has outstanding issue that needs to be handled in order for it to be put to rest

70, *Golem/iron cobra/necrophidius has a "program" which it keeps running requiring it to head to a room whose door's been bricked over

71, All actions in (sealed?) room A cause resulting actions by monsters in room B.

72, Capabilities displayed by PCs in (sealed?) room/complex A allow creature in area B to do all those things: if you ever cast fireball there, it can too now etc

75, Object/location is Dorian-Grey-style storage area for something noncorporeal or esoteric (bitterness, fat, sleep, etc) opening or destroying or interacting with it lets it all out

76, Enemy can snipe at you from a protected position. Preventing it requires finding a hidden entrance to the network that leads to where they are while being sniped at.

77, New magic item has a general, not-obviously-useful purpose (change the color of any object for instance) which is, not obviously, the key to a situation (yellow goblins at war with red goblins for instance)

80, *Every creature in an area acts in a coordinated "boss pattern"

81, *"Boss pattern" code is encoded in an object like a musical score--changing it changes the behavor of the boss or foes

82, Death trap-like murder devices in rooms have a pattern (reverse gravity room first, magnetic room second, etc) that can be altered by altering the object the pattern is written into. Change the "score" change the order of the rooms. (Disperse party to make this important?)

83, Rival group is in the same dungeon/sandbox/wilderness/castle. PCs made to magically monitor their progress and position from afar but neither side knows the area well.

84, Combat in cramped, physically discontinuous space like: going out the west door brings you in through the ceiling, etc. No direction is what it seems but it's stable.

88, A trap situation is set up--the trap _will_ activate under x y z conditions (ritual summons a devouring creature for instance). Foe attempts to get PCs to fulfill the conditions w/out revealing themself.

89, Apparently irrational behavior of creature is part of complex ritual, interrupting the behavior or altering it causes the ritual to go awry in analogous way. For example: the path the foe takes through the city is the one their terrible Star God, once summoned, will take through the city.

90, Previous events erased/reversed by a magic device. Like: each of 10 candles maps to a previous combat round--extinguish the candle, undo the round, etc.

91, Time pressure: x complex task must be completed before y disastrous consequence. Approach of y is clear and on a graduated scale. T-minus 10, 9, 8

92, *Evidence of approaching consequence is not obvious at first.

93, PCs are in a situation where most actions have major consequences and they are instantly made aware (prescience, crystal ball) of consequences after taking the action. You killed that guy? Here's the duke discussing the cavalry goblins he's left to his widow, etc.

94, PCs are in a situation where any viable action will have immediate major obvious consequences. Like: any one of several NPC generals in the room has to die but each one of them is in control of a different army that will invade the dungeon if that leader does not leave alive. So the decision is which army or armies to unleash and defend themselves against.

96, Foe has-/is composed of- a number of debilitating problems (blind, crippled, stupid, etc). Defeating the foe requires these be off-loaded onto someone else (probably PCs). Probably the best way is to give different problems to different PCs.

97, *Debilitating aspects are self-canceling if organized properly, so like if you take the foe's cowardice and recklessness they cancel each other out, so the trick is to be organized.

98, NPCs and monsters secretly react to PCs based on some obscure-but-discoverable detail of clothing/hair etc

99, Dungeon/building doesn't naturally lead to goal/exit. The space must be rearranged using some mechanism inside the space.

Love these seed idea lists, thanks.

That was very neatly done

Very nice stuff. Have to do some work on an adventure tonight. Will seed a couple of bits off your list.

Lots of good ideas in here to work with. Thanks.