Ferox The Incinerator, god-dragon of Cobalt Reach--the only dragon that, in four years, the party has ever seen--is no more. It took about a year.

That's the situation as the session starts.
__

Cody the thief sneaks to the summit of the mountain beneath the floating fortress of Ferox.

She sees the knight and the bishop.

The rest of the party arrives. Their position is given away, initiative is rolled.

The reptilian archbishop commands Mandy' cleric to leap from the mountain--she falls, taking 7d6 damage. Being 12th level, she lives.

Connie's thief, Gypsillia, with her pig's head helmet, is like "I'm gonna hide" but Mandy tells her to chuck the hypercube.

She does. The high-level ancient fucks are now at least temporarily inside a cube of inscrutably distorted escherspace. With tentacles.

The sudden emergence of a large extradimensional pocket realm just beneath her home has naturally drawn the attention of the dragon.

I enlist the aid of Chewbacca the Puppy to demonstrate scale. 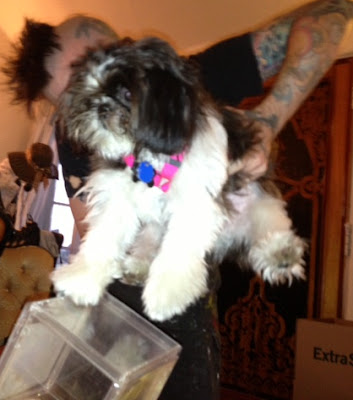 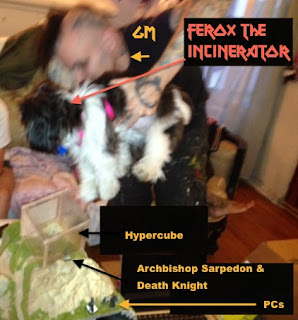 The thieves hide, the wizard turns invisible and gets incidentally smacked by the dragon for 4d6 as it settles to the ground, the cleric lies in a pool of her own blood at the bottom of a sheer drop and then the ranger walks in all "Oh, hey guys, there was traffic on the 101".

The dragon spends exactly one round looking into the spacewarping cube in which his her highest primary ecclesiast is currently encysted.

The invisible wizard, staring at a wing the size of a frigate, knows that, basically, if Ferox notices him, he will die.

He moves on tiptoe. He chucks the void sphere. 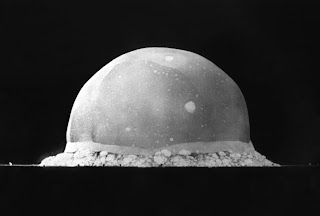 An absolute nothingness 10' around opens up in the wall of the dragon's chest. Digestive juices as old as time spill out, everybody saves for half damage, except the wizard, who's knocked unconscious.

The cleric, from the base of the cliff, fires the paralyzing bolt into Ferox's head. The void grows a twin.

The ranger climbs toward the paralyzed dragon and stabs it with a wiggly knife, picked up in august from some jackalmen, that inflicts cursed wounds.

"So ok, this round I have to roll for the voids. (roll roll) They split again. So now I gotta roll to see where they go. You're here. It's here. I'm rolling an o'clock: if I roll noon, you're just annihilated, if I roll 11 or 1 you get a save, I roll anything else it just goes that way."

"...6! The voids continue to tear into the dragon, still paralyzed. One of them hits the hypercube, the blackness starts swirling across it like ink in milk, and a side of the cube rips open and starts gushing out bubbles like lava hitting air and freezing into hematite."

They run. The dragon is toast, metastasizing vortices and negadimensional plasm cover the mountain summit.

They get a lot of xp and spend the rest of the game almost getting Total Party Killed by some goblins.

The ranger gets captured by one.

Atop the mountain, beneath the dragon's fortress, the fabric of being convulses. There's still a lot of stuff in there. And the pope in a gibbet. 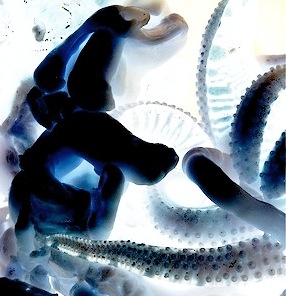 After dealing with an epic dragon, they almost get killed by goblins. Awesome. xD

That is the most obvious motivation for scaly monsters, & presents a nice unifying way of getting all of them under one umbrella, I can't believe I never realized it before. Beautiful. I am dumb & that is wonderful.

I have been kind of off fantasy RPGs for a couple years, but this tale has given me a hankering to play one.

That sounded like a great game that will never be forgotten by everyone envolved. The best type of roleplaying.

As for the "hating all mammals" I am currently trying to awake Ubtao and release a Dinosaur Apocalypse into the Realms.