So there's this: Running an on-line campaign where the party's goal is to find and capture the party in your real-life campaign is both fun and educational. 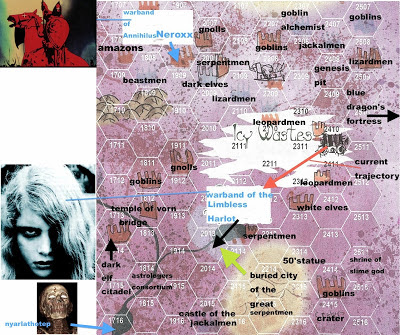 When last we left the girls they were gingerly dealing with this maxxed-out dragon.

They grabbed some loot and went out into the hexjungle to find some means of dealing with the creature.

Which is always fun, right? You see a big bad and then the players, rather than turning it into one more disconnected episodic encounter, decide to move off and fight another day, keeping that looming threat in their mind. Like they're doing the foreshadowing for you.

So: back off into the irradiated jungles of Cobalt Reach.

Some very impressed goblins (we're at that neat point in the campaign, a few years in, where the players are 7-10th level and have some history and are obviously terrifying to everyone they meet) tell them their best bet for weapons is the rolling fortress of the Star Witch... 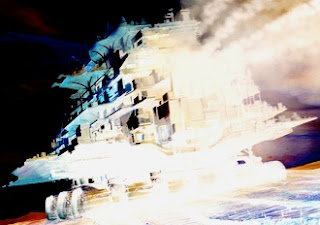 ...which trundling monstrosity they then sneak aboard.

Then somebody's mom makes cookies and the session ends.

________
Meanwhile in Hollywood I agreed to run a game on-line last Monday.

Vote: Goblin Boss job it is.

I was kinda thinking it'd be nice if the on-line people helped save my city--after all, I got books to sell. But no, anyway...Goblin job.

The Goblin King has a grudge from a long time ago.

This goddamned pink-haired war witch and her warband not only humiliated him but reports from the southern frontier indicate they are contriving to discover some kind of mcguffin to save the doomed city.

So, the assignment for the online group: go hexcrawl around and find them.

_____
Now basically, in a sandbox, you have to have about a gazillion half-sketched ideas in every direction and then be prepared to build up on them when the party moves that way. It's a constant back and forth between planning and improvisation and, in the shuffle, some stuff can get lost: the PCs find a problem, half-solve it, have some fun, but then go "Fuck it" and move on 'cause there's D&D in every direction.

The great thing about having the second party chasing the first is that consequences of the party's actions (the engine of typical, structured dramas) suddenly spring up out of everywhere. Things have history and NPCs have allegiances without you even having to try.

So this second party starts looking for the girls: they find the tracks the rolling fortress has left through the jungle. They run into a herd of centigors who kidnap their totally redshirt wizard.

The first party sees this herd of centigors carrying the limp wizard in the next session and has to hide from it.

The second party finds where the rolling fortress clearly ran smack into that lake near Hex 2114 and was attacked by the warband of The Limbless Harlot (like that but, y'know, without the arms and legs). They have to do some forensic work to reconstruct the events.

The first party has abandoned the fortress and made off across the Reach to parts unknown, tangling with and taming an ocelot, and resting with some allied goblins.

The second party likewise makes an impression on some local goblins--the fact that Jez's goblin PC rolled as well as he could on his charisma plus strolled into town riding a man pretty much blew these hicks away--and also a citadel of creepy carrion-crawler god-worshipping serpent cultists who waste no time creepily tattooing party #2 and doubly charging them with the mystical task of finding the troublesome war witch and taking all the magic war witch stuff she probably just looted from the rolling fortress.

The War Witch herself is meanwhile sitting right next to me listening to all this on the laptop and occasionally commenting to Party #2 to the effect that she's noting their various levels and Armor classes. I put it down to prophetic dreams.

And, basically the point is all that thinking you do in a sandbox campaign when you go "Ok, there's a village-- why do they care? What do they want?" between and during sessions is largely done just by GMing the other game. Each party is creating the background action animating the other party's sandbox.

It might sound like a crazy juggling act but in actuality it makes it all much easier--I know exactly what's going on in the whole area all the time because I just GMed it. If I had just written it all out it not only would it've been lonelier but harder to remember.

I suppose if group 2 ever does find group 1 I'll have to schedule a party so they can fight.

yah did not mention Mandy's character alone has more levels than the characters of party 2 combined. Raw mechanics alone , we are doomed. But comparing player skill? We are super doomed. My most effective plan has been to hide in trees. That and a bank robbery have gotten Mo to level 4. Yeah. We are doomed.

And I'm the freaking team leader.

Scrap - There was that one time when you saw an entire fallow field that had been covered in ground-hugging webs overnight and then went wandering around the field trying to discover the lair of (presumable) the giant, particularly efficient spider. That plan, at the very least, worked.

But to the point - I'm actually planning on doing this same thing with my home group and G+ when I get New Feierland kicked off again. I am hoping for a similar experience.

I guess it's not so different from running different parties from the same 'base' location over G+, which has had some great results and greatly helped my GMing.

I love this kind of thing - and like Trent B, I want to do this when I get Aldwyr up and running. Might even be able to do this with Jakallan Nights.

The descriptions and just sheer inventive character of this make it really cool to read. Thank you.

yeah but she's a witch and you're a princess, and that always tends to go a certain way

I thought Mandy was playing a druid. But then I haven't closely followed all the posts - I'm fairly new to the blog and have been hopping from topic to topic.

I'll catch up eventually. Wish any of my players looked like some of yours.

I had something like this happen a while ago, but with a cops-and-robbers dynamic where everyone thought it would be great to join a secret organization of assassins and kill a noble in his own home except for the group's lawful-good paladin.
The result was two games of Hector the Paladin searching a burnt up building and interrogating prostitutes and staking out an orphanage and finding a dead body under the pier while the main party not-so-stealthily murdered a bunch of people. Also a weird armed boat chase with magic missiles.
Until I decided that the party's next assignment would be to kill the nosy paladin, which turned into a great fight over rooftops and canals and such.

Persistent campaign worlds are just hands down fun - I ran a shared-world Shadowrun campaign for two different groups for about half a year that ended up being a blast for all involved. Including, unfortunately, the gameworld. Neo-Seattle didn't survive the experience. I've heard stores of Gygax running many times many groups concurrently back in the day and it would be, I think, an interesting experiment to try and pull off the same- 20+ odd players all sharing the world, rampaging through it and leaving tracks and ruins and wreckage of all types for the players that come after them to figure out . . .

Goddamn that plan got Mo killed and then brought back as fey wooden double of himself and I have like 2 paragraphs of weird conditions on my character sheet because of. Some of the conditions I do believe you , the g.m, don't know what they mean.

"You will never see a baker, nor a thing that clings or wears bread or a bell as an aegis."

Just go with it. Chicks dig it.