Realized Secret Santicore was really good.
Speculated what 5e should look like.
Wrote a GM questionnaire, people answered it.
Saw my players fight ice monkeys.
Realized A Book of Beasts by TH White was really good.
Wrote an essay about people who love rules. Made people who love rules mad. Angry mail. Trolls.
Wrote random tables.
Told RPG companies to hire more women. At least one of them listened.
Played Dwimmermount with James Maliszewski. Fun.
Moebius died.
Thrown off Story-Games.com.
Got GMed by Satine. Twice.
Wrote a called shot mechanic.
Jeff stopped running his Wessex campaign. Everyone angry.
Wrote a superhero story game. It passed the time.
Wrote a Chill hack for Call of Cthulu consisting of one rule. It worked really well.
Wrote an essay about people who need rules. Made people who need rules mad. Angry mail. Trolls.
Got hired by WOTC. Angry mail. Trolls.
Explained that, no, really, I got hired by WOTC. Angry mail. Trolls.
Discovered blogger's Batmanalytic feature: 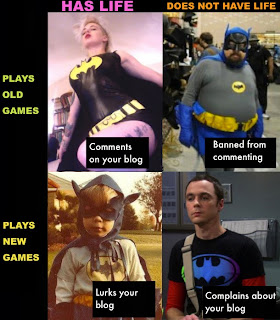 Wrote a story game using playing cards. Fun enough.
Had International Anklebiter Illustrator Day.
Got interviewed on some podcasts.
Half-bird ranger died in the home game.
Found an excellent RPG-thing carrying case at the antique mall in Medina, Ohio.
Realized the One Page Dungeons this year were really good.
Explained how 'GM Fiat' actually works. Angry mail. Trolls.
Wrote alternate fighters, rangers and thieves for old-style D&Ds.
Played Burning Wheel, had fun, wrote about it. Angry mail. Trolls.
Had an idea about a couple story-games and their connection to wargames. Angry mail. Trolls.
Interviewed author of one of those games. He said the idea made sense to him.
Interviewed authors of the old Marvel Superheroes game and the new one simultaneously.
Talked with people about Sword & Sorcery vs Anime Sci Fantasy. Angry mail. trolls.
Hello? Gammarauders? 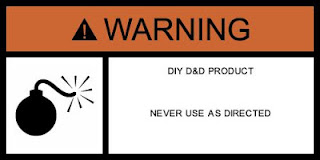 One year anniversary of ConstantCon.
Ran a lot of FASERIP games on-line. World partially saved. Northwest Russia annihilated.
Hired by LOTFP to write an Alice-In-Wonderland thing.
Realized that was going to be awesome.
Invented a PCs-in-the-middle-of-a-mass-battle mechanic (refining Pendragon).
Invented a PCs-crawling-on-big-monsters mechanic (refining Scrap Princess).
Party druid wrote an article about sexual harassment. Roundly lauded by people who'd previously claimed our game group appearing in the media was "bad for women".
Said Google + was becoming the best forum for talking about games. Angry mail. Trolls.
Wrote some notes on Dungeon World. Angry mail. Trolls.
Won a prize for game thing I wrote.
Went to video game conference about it. Got interviewed a lot.
Saved some FLAILSNAILS PCs from imprisonment in Castle Amber.
DMed for a college game design class.
Thoroughly enjoyed Dungeon Crawl Classics.
Played 4e for charity (again).
Made that:

Invented a sci fi storygame specifically designed to work in G+ hangouts. Passed the time.
Made the RPG Speedcyclopedia.
Hacked Deities and Demigods so you could use it at the table.
Hacked Carcosa so I could use it at my table.
Wrote about my favorite Adrian Smith picture.
Made a Random Villain Generator. Dave abulafia'd it.
Players faced a maximum age maximum size blue dragon. Survived.
Played Night's Black Agent's with Kenneth Hite. Fun.
Made up Murdermaze G+ game. Fun.
Made up Warlords of Vornheim G+ game. More fun.
Ran Cthulhu on Christmas.
Played in Vertique, Hill Cantons, Trash Planet, Cocanha, The Vats of Mazarin, The Malicrux Sector, HUSK, Aggravaina, Scrap Princess' game wherever that is, NGR Kazakhstan, Castle Nicodemus, The Caves of Myrddin, and Outland.
GMed my players from the Horrible Ice Monkey Cave across the sea to the Cobalt Reach and the Fortress of Ferox the Incinerator.
Saw the Goblin King of Gaxen Kane hire a gang of G+ FLAILSNAILERS to hunt down my home group.

Most fun game to GM: Mmmmm...maybe this one? 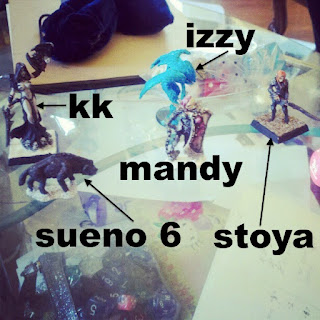 This one had its charm, too.

Most fun game to GM on G+: Warlords of Vornheim. (Session 1, Joe's maxed out FLAILSNAILS wizard gets killed by a catapult crit in round 1.) Close second to Chill of Cthulhu.

Most fun game to be a player in in real life: NBA with Kenneth Hite or 4e with Satine.

Most fun game to be a player in on G+: It's very close, but Jeff's Wessex games or the Murdermaze games Scrap and Joey ran. Though it's a reallll close run thing with a lot of other games.

I am sad that there are so many instances of trolls. Fuck that shit.

That's the problem with trolls, you build bridges and they take that as an invitation to set up home under them.

Look like you had a good year Zak, hope this year is even better!

That Batman pic is awesome!

If only there were links to all the things...

If only there was a thing in the margin with month-by-month indexes of every single entry on the blog, oh wait....

You rock Zak. If I was anywhere near your side of the planet, I would be delighted to buy you a beer (or what ever you drink). Keep up the good work. Hopefully you can stir up more trolls to their blind charges next year. They are pretty easy to ignore or laugh at the rage addled inchoate thoughts.
I don't agree with everything you say, but a lot of it makes sense. And I am not going to quibble over the small stuff.

'Tis true but it's very time-consuming to search the articles for links to e.g. podcasts you visited.

If only there were a tag cloud in the margin with a list of all the topics the posts are grouped under like for example "I'm On Somebody's Podcast", oh wait...

but what is it?

Found an excellent RPG-thing carrying case at the antique mall in Medina, Ohio.

That was a great year for you blog, Zak. May this next one be as good, or better. Roll on!

I find I want to read everything you wrote that generated troll comments, just to spite the trolls. Also, because it will be worth the read, even if I disagree.

Speaking of the past: Something you may be interested in.

I have no idea how to make that a clickable link, maybe it'll do it for me and no one will be the wiser.

Awesome Year, lots of articles i've enjoyed and a few I missed. You still working for WOTC?

too young, but thanks