Tales Of I Guess The Earth

Radioactive orange turtle kaiju the color of really Americanized orange chicken and fat dragons full of sand in a land of giant machines that can be programmed to make noises and gas-filled sphere-things and strange messages on unattached paper containing holiday greetings, also there's flail snails that look all wrinkly Dark Sun like they're made of black leather and a beholder ditto that's not properly floating like they're supposed to so I guess it just rolls around in the dirt.
This campaign idea was based entirely on what's going on on the piece of furniture the TV is on in my living room. You can see it down at the bottom of the entry where it says "HERE's THAT THING" in blue.
This is a campaign idea based on what's on the shelf opposite:
Rancors and armored cave trolls dominate a landscape with albino chinese dragons and blue mecha and there's a TIE bomber and a devil dinosaur that looks like it wants to get in the bomber and a giant articulated wooden hand and lobster boys who live inside snowspheres. Also there's gargantuan plastic formations shaped kind of like the angle pieces on some furniture.
This is a campaign idea based on listening to Mandy play Mass Effect for like a million hours:
You go to all fucking planets and tell aliens They Have To Not Kill This Person Somehow Connected To Their Past Because They're Not A Murderer (or they do because fuck it) and then someone goes "Impact Shot!" and then the Apocalypse Now guy sends you on another mission because the world is backwards.
This is an idea for a Vancian civilization based on reading RPG dorks on the internet:
A whole antiHammurabian culture based on the idea that if you do one thing a citizen doesn't approve of, you must, therefore, be guilty of all other possible crimes. They pretty much believe anything that isn't them (other kingdoms, foreigners, orcs, halflings, tigers, the sun when it's too hot) are together part of a vast connected conspiracy to do everything bad all the time for incoherent conspiracy reasons the culture has, itself, made up. They live in fear of upsetting each other and so they exist in a continuous state of imaginary consensus. They wear Quintesson masks and denounce random strangers and everyone must agree, remain silent, or be convicted of choking nuns and bee rape.
This is another idea I had for another one based on reading more RPG dorks on the internet:
A whole civilization that cries about everything that happens all the time and is boring but if you point it out they metastasize and there's just more of them and they become even more boring (save vs sleep) and crying (save vs. psychedelic crying-induced nightmares) so the trap is you have to ignore them to get past them and find the treasure. I think actually these could be the soulless revenants in the Wire hack I wrote.
Oh and here's another one:
So there's this guy--let's call him Cheffy Carlo--who is just some guy who does whatever stuff (like Oh, look, I found a lady bug! Oh, look, peaches! Where's the sand I left over here?) but the entire society is like obsessed with his every movement and motion and spends so much time trying to interpret what he does they forget to actually do anything themselves ever and they just put their boners into holes they make in blocks of cheese (they are all male).
This is my friend Kyle's reaction to some people saying his comedy act was too bleak and misanthropic for the crowd he performed for at Blizzcon to relate to:

i guess if you're bleak you don't even have a fantasy land where you can go and get a dozen pixie beejers for every toad king you thwart. 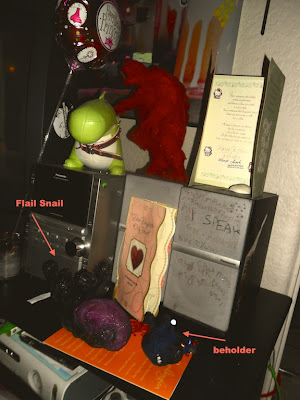 This is a fairytale adventure idea based on what's on the bed: 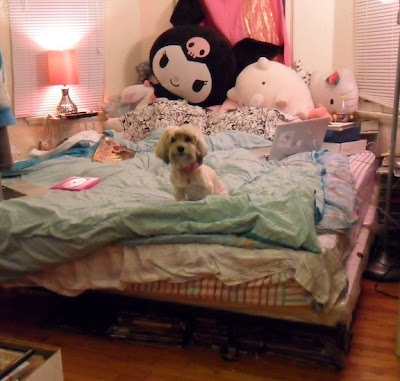 A giant cat, rabbit, and pig have been watching you while you sleep. They can move and talk but only when you aren't looking. Are they malevolent? The rabbit looks malevolent. 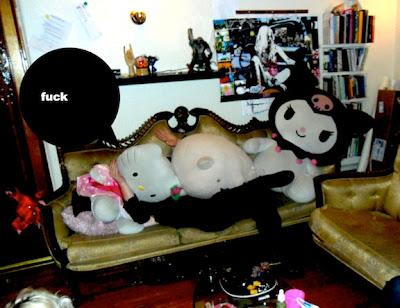 I thought the flail snail had surely been devoured by the transit dragons. I'm glad it made the perilous crossing.
That.. antiHammurabian society sounds like the one I was captured by in Melbourne and barely escaped with my life and sanity intact.

The rabbit is just the muscle. It's the cat that's the brains of the operation, hiding behind a facade of cuteness.

scenario based on randomly generated text from about 800 of my dreams, as an excuse to play around with go, google's ridiculously underhyped programming language (because any time i try to learn it i just get distracted by how cool and unusual it is, sorta like how any time i look at your drawings i just get distracted by the details and then walk away without actually appreciating it for what it is) as an excuse to write a comment:

superintelligent talking rocks that unfortunately only speak chinese are waiting in a bed, having conversations with him about all of the cooking the monsters are doing downstairs.

but there is no downstairs. there is only a bag of weed in the dead body that has been let into the big machine to pick you up with its giant claw. it's a sort of souvenir shop there. don't worry, no one has ever managed to get the claw to pick something up for long enough to dispense... except...

well, once. it was quite big. a stuffed animal replica of the walking flesh-eating sunflowers who delivered psychedelic bug bites.

the first attack was in an old house in which i have forgotten everything that follows.

in hawaii, i was ready to die at the cathedral.

i had no idea how i had been cut.

(yes, they are rough-edged and not fine structured.

because i saw the edge of some paper torn out of the timbaland-onerepublic song apologize: my realization of the non-fine-structuredness of free quarks owed itself to this...)

when i tried to think about how to proceed, i came up with only past life murders. then i noticed something beautiful.

a comedy group consisting of comforting, light blue sawtooth patterns, performing on the concrete floor of a young woman who sold drugs.

she would need my passport to cross into it, into the patterns, simply by imagining nothingness.

o hear ye, thus she reached the ground floor of the dream-neighbors from our tribe (who, due to the other part of the knives found there in the background color, were not dangerous.)

But she changed her mind once she got there. She painted over the face of the restaurant that was playing. I got the fuck out of there, worried they would cut my hands, and fucked her long and slow.)

as for the tribal man, he was playing a lot of light by making swimming motions in the modern sense -- the display was much higher than it really is -- and all sorts of unspeakable ghastly acts involving interacting sexually with a building with several doors in a room full of algae.

then this man had come back and she would get together regularly with him and play videogames on his harddrive covertly, almost getting attacked outside of the documentary movie about time travelers who are born in one period and decide for whatever reason to become expatriates in another region of spacetime.

i was not going to give the planets new names in a new house, singing "The time of year. i am no longer secure."

as for the ghost, I knew it had come inside the house. some people wondered if (could have sworn really) it had salmonella on it.

the only solution was for me to pretend to be invisible, to ascend the rock, attend some sort of party, *vagina under the pews*... green plastic handles worn on the internet...

Hey Zak,
Not sure if I should post this here or what. If not, I'm unsure of how to get a hold of you otherwise.

I just finished a prototype of a game of my own. I was wondering if you would at all be interested flipping through it and telling me what you think?

By the way... (sorry for not posting this first)
This may be the most random piece of genius I've ever read and I love it. Have you run games on this random stuff before? If so, how do you do it! If you can do it, how do you keep from not laughing the entire damn time! :D

every DM has to improvise sometimes.

anyway, zakzsmtih at hwatmayle--can't guarantee i'll be able to read it but if i have time

Melbourne nearly killed you! Gods, there are surely certain societies here more amenable to reason and gonzo enjoyment than the antiHammurabian dystopia depicted above! (Although I'm sure such a culture does exist in spades here in the dungeons beneath the CBD, Bourke st especially...)

I want to read the Actual Play Report from the session of Fuzzy Heroes you are no doubt intending to run.