It's A Good Thing This Game Was Well Documented...

...because it went on for like 7 hours and it made no sense. 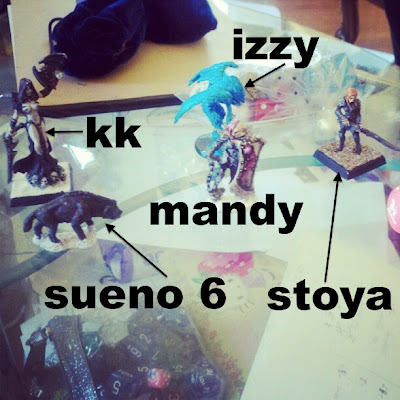 You ever have one of these games where you start at like 2pm and then people keep coming and leaving and it goes on until you can't remember your own name? 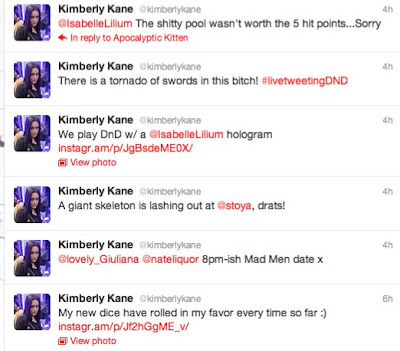 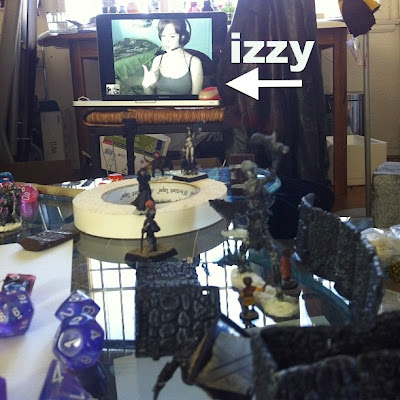 (Izzy G+ed in.)
-She had rotten luck all day...Like, KK's first plan to kill the megaskeleton was to shoot a crossbow bolt through the undead skeleton's ribcage and snag it and yank it over into the pool of goo. But then like she did the riskiest (1-10 fumble/11-20 crit) version of the called shot mechanic and ended up shooting Izzy through the guy's ribcage.
She survived, however and went on to do a fine job flying rings around the undead skeleton in the Swords-Of-Damocles-All-Over-The-Ceiling room while the fucker stumbled around in a swordy rain until Stoya finally aced it via Shillaleiaghing (you spell it, fuck), taking a gamble on the 10/11 split called shot again and...skin of her teeth...rolling an 11. 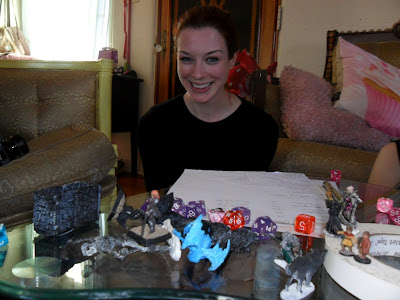 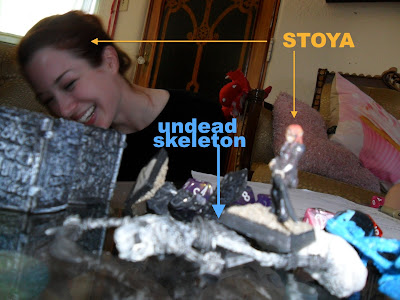 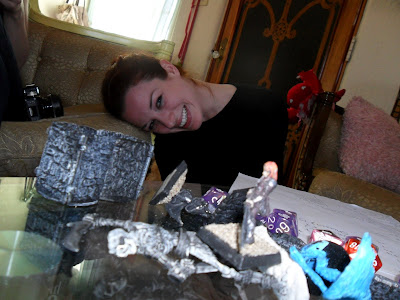 ...but one monster later, Izzy was iced from this world. 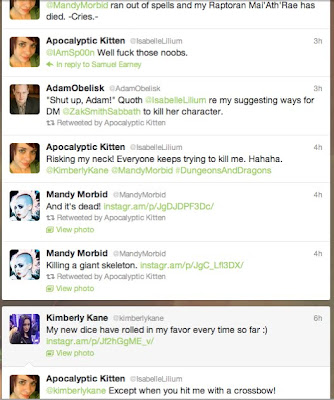 Ummm...what else....
-Tried out that "Gain one hit point during a quiet interlude for each minute of uninterrupted in-character conversation" mechanic I thought up for that Wire hack I made up the other day. It worked out all right--though I did end up learning faaaaar more about sexdwarfism and abusive wizard parents than I think I really needed to...
-KK has new dice... 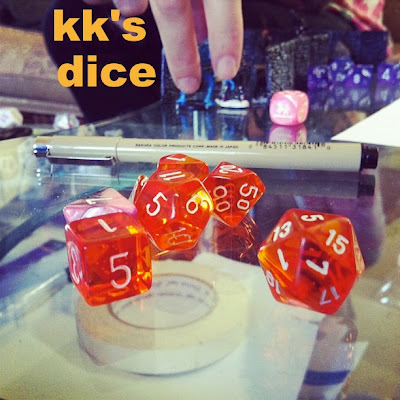 ...you'll notice the d8 is not orange. This is because even after (how many?) years, KK is still like chronically unable to recognize the 8-sided die (the one her barbarians have been hitting people with for like ever). So now the 8 is pink. Problem solved. Of course now she's got this druid so it's all about d6s for Call Lightning. 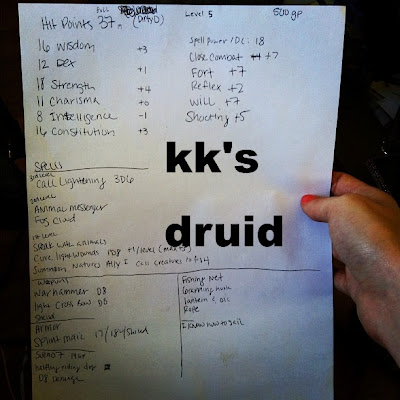 -Ever make a dungeon that's too dense to keep track of? I kept forgetting there were these creepy undead children following the PCs everywhere. (Plus like the party has a hawk, a crow, a dog and a wolf following it around at all times.) 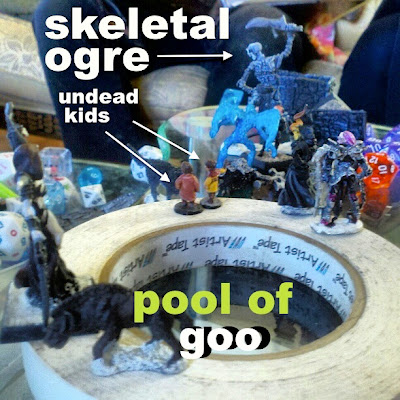 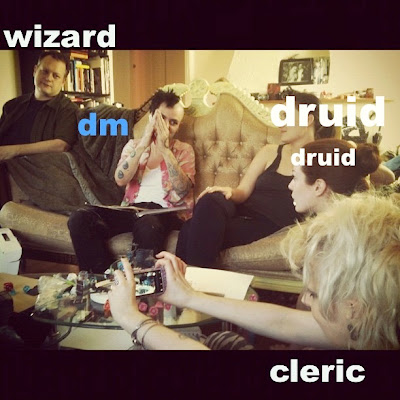 -Notice the overweening surfeit of magic-types? They summon shit and just do not stop. Every fight I got like 2-3 random widgetmonsters whaling on whatever. The new mechanic for that is I just have them reach into the miniature box and pull out whatever. Ok, 4th level monster summoning? You got a 4th level version of whatever you just pulled out. The SphereHeaded Undead DoppleOgre ended up fighting a treeman, a dryad and...a horse. "Well...a creepy undead nightmare horse..." That's the last time they let Jeff pick the monster...
If I really had time on my hands I'd sort all the miniatures into summoned-by-level boxes but I got more important things to do like tell my players to stop fucking instagramming when we're tryna have a game here. 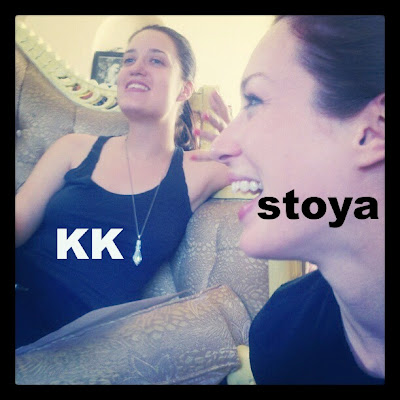 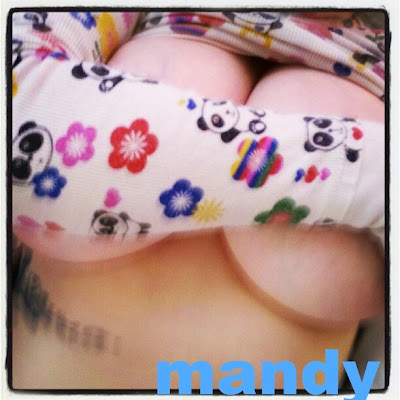 all the names in caps and colors make me think of an old school tv opening. like Charlie's Angels or the A team maybe?

1. "You ever have one of these games..." Yes. Those are my favourites. I can never find my face at the end.

2. What I hate about your called shot mechanic is that I didn't think of it. I think I might like to run it in New Feierland. Do you mind?

3. I claim the position of Internet-Creep-Guy re: Stoya/Hot before someone else does.

4. Your summoning spell technique is excellent. On the other hand is Raggi's LOTFP Summoning Extravaganza, which I still can never see myself doing properly. I love the results, hate the process. Give me your opinion please, ZakSmibbath.

2. WHAT THE FUCK DO YOU THINK I PUT IT ON THE INTERNET FOR?

3. There's something of a line.

Somewhere holding a camera was a Dwarf fighter... ;)

Indeed. Where would we be without Gareth the Obscure?

Poorly informed on demihuman miscegenatory practices is where.

3. I challenge the line to a fight.

4. ALL OF THE DICE. I do not have 15 minutes to summon a floating spleen that dies in two rounds from goblin javelins.

4. Cut and paste it so it turns into a Vornheim-style split-column table and read across.

There was also my summoned totally useless manticore. It was a good game we killed so many ogres.

2- As with Trent- Dig the called shot mechanics and resent that you came up with it first ;)

4- Where the fuck did you get that couch? That this is tits!

I have to admire that character sheet is actually just an ordinary sheet of paper where the all the relevant stuff is written, and not a fancy printed copy or electronic thingabob.

Missed the Called Shot mechanic, the first time around. Cool! :)

this post brought me back to the Hit it with my Axe days.. love the pics interwoven throughout. PS where did you get SO many (legit) minis?

Ok, that definitely helps with the table... but the whole thing with the 'who gets to be in charge roll' and 'how many things do I want to sacrifice'.. They're great fun, but totally wasted for anyone level 3 or below, I think.

what's your quick process for figuring the abilities of "a 4th level version of whatever you just pulled out?"

also, who's "wizard?" he looks pretty tense there - is a dire fate awaiting his wizard?

This just makes me miss gaming. Haven't been able to find a crew to play 3.5 with since i moved to LA.

4-Here is the embarrassing true story of our couch:

We got it last week for free from the christian lesbians downstairs who moved out and it looks TERRIBLE in real life. It is a gross ugly grandma couch, HOWEVER because of the way the cushions reflect flash it is unbelievably photogenic.

In pictures it always looks like a fantastic Guy Ritchie british gangster couch.

Until last year i thought everybody did that.

A lot of them were given to us by Reaper to use on the show.

Hey, I was gonna say that!

But do the box summons ever have special abilities?

Of course--as the original, just scaled to the summoning level.

Do you have a rule of thumb or guideline for how you scale a special ability on the fly, or it it just totally a "go with your gut instinct" thing?

Gut. You're only ever going to see this monster once and summoning it was random anyway, so there's no chance of fucking with a players' strategy.

The christian lesbians.... Interesting... "Sigh.. Oh sky cake.. Why are you so delicious.."

Yeah from the picture it looks swank as hell, albeit maybe uncomfortable.

@ Zak- So when you pull out a mini for a summoned monster- that's it, after it is dead or disappears you toss it into a discard pile?

Man I miss my christian lesbians. Gonna use your crit/fumble method when I run D&D for their children.

Speaking of "Axe" is there ever going to be a release of the remainder of the footage?

Last I saw you were still with Bobbi Starr.

Or have just missed the announcement about this some[where/time]?

when the rest is released it'll be announced here and elsewhere--facebook, G+. i'm real busy, so I am very lazy about getting the postproduction people together to finish the footage we have.

Get on it man! We miss seeing you guys in, um...action.

So are Stoya and Kimberly Kane really smart and read books and stuff?

Stoya has a broader taste in books and likes sci fi, including like Terry Pratchett.