The STACK System
This is an instant megalite low-prep cinematic-style RPG. You can like play it on train trips when you have no RPG books.
You need pens, one piece of paper per player and regular playing cards. The more decks the better but just one could do you in a pinch.
-So each player turns a piece of paper sideways and writes the word STACK across the top like so: 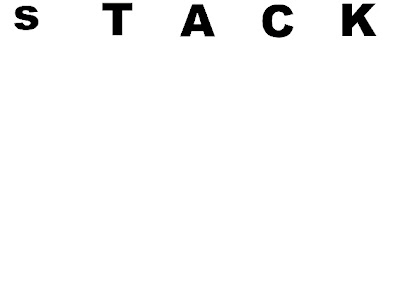 (You can make the "s" whatever size it just came out small because of mystery reasons.)

-Anyway, then you decide what genre you're doing. This (theoretically) works well for movie-ish genres like westerns, crime stuff, horror. (I've only playtested it once but it did the job and took no prep, so yay.)
-Ok then every player takes 2 cards (except the GM, who just holds the remaining cards like a dork.).
-Now each player has to decide what to do with these cards. So, about the cards--
*Suit doesn't matter
*High card wins
*A card can be placed down on your character sheet (the piece of paper that says STACK) or held in your hand where no-one can see it.
*If it's held in your hand, it's called a Confidence Card.
*Before the game starts each player must put one and only one of the two cards down on his/her character sheet representing an attribute that is fairly obvious to anyone who sees the PC.
*Each letter on the sheet corresponds to an attribute: these are--Strength Toughness Agility Charm and Keenness (Keenness is intelligence and perceptiveness)
*So you have to put one of your cards down like so to represent one of these stats--any one you like... 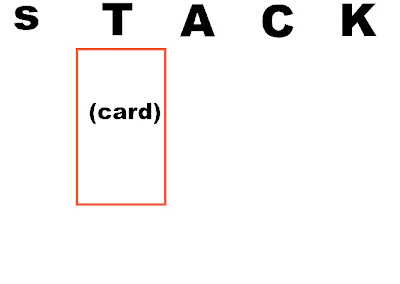 *So if that card was a 6 that PC would have a Toughness of 6.
-Ok so everybody picks a stat they want to frontload and then the game starts, their other stats are open. The players each have one card down under some stat and one "confidence card" held back. PCs get names, occupations, appearances, as much as you want, really.
-The game goes like any old RPG "You're in a stage coach with a barrel of cash, trying to escape Sheriff Bludgetwort and his posse!".
-Wait, you only know one stat! That's right--like in a movie, characters' abilities are revealed via their actions. The card already down represents an ability that you know your PC has (or doesn't have, or is average in ).
-So, each time anything happens you'd roll dice for in another RPG, the tryer (or attacker or initiator of the action) says what they're doing. The GM says what stat that action corresponds to. Like if it was shooting that'd be agility blah blah blah you've played RPGs before.
-If the player has a card down for that stat, then the thing happens with that amount of effectiveness--like if you try to charm someone and your charm is Jack of Diamonds then you are pretty good at that.
-If you don't have that stat yet, you use your confidence card for it. The confidence card is then discarded into that stat--the card now represents your value in that stat.
-The GM (or the opposing player) then pulls a card blindly off the top of the deck. High card wins. If the player wins, the thing happens...
Like:
"I try to hotwire the car"
"Intelligence?"
"Ain't got it yet--I am laying down my card and...it's a 7 'Ah know a thing or two, missy, this Chevy Cavalier will be ours in two shakes of pineapples or some such colloquialism' ."
"Ok, your intelligence is revealed to be 7. The difficulty of the task is a...(pulls card)...4. Consider it hotwired. K-chuckugug--the Cavalier springs to life! 'My hero!!' quoth she with wettening crotch."
- If the GM wins, it all goes poorly. The thing does not happen. However, if you were the active party, your stat still becomes whatever card you put down.
-If you are the resisting party (like you get shot) then you get to resist with any stat you can think up some flim flam reason for: "I dodge the bullet (agility)" "I take it (toughness)" "I flash the cop a winning smile that distracts him/her/it (charm)". The GM (or opposing player) then reveals his/her card.
If you win, fine, however: if you lose the contest, you turn that stat face down. You can never again use that stat in any way. You still may have toughness, charm, intelligence etc. in a storytelling sense but for the rest of this movie, that ability Can't Save You Any More.
-If, after a contest, your stats are still not all filled up, draw a new confidence card.
-Once all your stats go face down, you're dead. Or captured or otherwise over for the session.
-Combat initiative is decided by each side drawing a card--high card's side goes first. These cards are not discarded into any ability score.
-If you are resisting in a contest and are about to lose, another PC can help you out using his/her confidence card or a stat that's down (add the resisting cards together, with royals counting like Jack =11 etc). However: the helper then turns that stat face down (and you, the original resistant, get to keep yours). S/he has sacrificed part of his/her self to save you.
-Likewise, someone can help you attack or perform an active action, but then you both lose those stats thereafter--even if you win the contest.
-Aces count as 14 (they beat everything) if played by the GM. They also count as 14 if played directly as a confidence card by a player. However, after that, whatever stat the ace is discarded into is thereafter considered a 1 (anything beats it). So using an ace represents like the one time you get lucky at something you suck at--like when the butler drops the flowerpot on the burglar's head and knocks him out.
-Ties are broken by both parties drawing fresh tiebreaker cards until the tie is broken, high card wins. Players do not add these tiebreaker cards to their stats.
-As you may have noticed, NPCs and items and stuff don't have static stats. The GM just pulls a card to represent how serious of an obstacle/threat they are at that moment in the "movie" once a contest is afoot.
-Game ends when a session-specific objective is achieved or when the players have to go eat dinner.

On the subject of card based ultra simple RPGs, there's one that was taught to me by an old Mauritian lady in a campsite in Wales (the original inventor is unknown). It's even lower prep than STACK as it only requires a pack of cards, and a reasonably flat surface to put them on.

The Adventurer chooses a real-life location (The Pyramids, the Presidents Bedroom, Alpha Centauri, whatever they want so long as it's reasonably far away) and then has to describe what their first steps to get that location would be from where they are currently in real life, say for instance sitting round a fire in a campsite in Wales. So it would go:

Adventurer: I go get into my car and start the engine, and drive off.

The MC then draws a card from the deck and puts it down, if the card is a red suit, the adventurer succeeds and the MC will say "You succeed, and you're now driving on the motorway". If it's a black suit, the MC then refers to one of Forces Against players to describe the nature of the adventurers failure, so they may say "When you start the car, all the doors lock on you and you hear a ticking sound". That is then considered to have happened and it's the Adventurers turn again.

Adventurer: I use my years of training as a bomb technician to reach into the back seat, disable the bomb, start the car and drive off.

MC: Astoundingly you succeed, and you're driving on the motorway. Forces Against Player No. 2, what do you think will happen?

FA2: So eager are you to get into the President's Bedroom, you start speeding and some cops pull you over. Unfortunately they notice the bomb in your back seat, so they immediately taze you and detain you as a terrorist suspect.

MC: Ooh dear. Adventurer, you're now in the back of the cruiser handcuffed with a bag on your head, en route to Gitmo. What do you do?

And so on and so on, going round the table so each of the Forces Against players get a chance to impede the Adventurer on their journey, or describe how the Adventurer failed. If the adventurer manages to get to their chosen location before the 52-card-pack runs out, they win.

Dang, this is fine!

Both of those card based games sound fun!