Notes On The Maxim Article 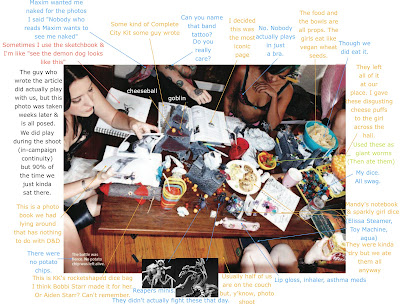 So the very polite and pleasant Davy Rothbart came over and played D&D with us and was a druid and wrote about it for Maxim (temporarily adopting the Maxim house style to do it).

(The pictures were taken on a whole other day.)

The article is very sweet and pro-D&D. If you're curious, it's the January 2012 one and is out now. It has something called a JWOWW on the cover.

-In the big picture of Satine using a Tiamat-paintjob Reaper hydra to attack another Reaper hydra held aloft by Connie, (full-frontality cunningly concealed by Maximvision) careful attention to the foreground will reveal a gummi worm attacking a pair of minis.

-Photo includes my hair looking even more disastrous than usual. I have no idea how photographers manage to find these angles.

-The girls' ship, the HMS Tastycakes, is a schooner, who knew? Not I.

-Our apartment is "quaint".

-For the record, only Satine would read Game of Thrones. Well, read it and be glad she read it. I would maybe carve a sword into my desk.

-There are a lot of references to-, and quotes from people in-, TV shows which I never watch but (judging from the blogs) you do, in the article

-Fact checks: 1.It was not "a friend" who put in my first movie, it was a total stranger 2. Mandy contacted me, not the other way around. 3.And she is like a GG not a DD. But honestly Maxim did a way better job on the accuracy and fact-checking front then 90% of highbrow mainstream media outlets so I'm not bitching. Basic rule: bigger the budget, the worse the fact-checking.

-This is a good bit: the girls are talking and "...comparing their male costars like golf caddies sorting though a bag of donated clubs"

-Semi-related: Joke and ye shall receive. There is now a snark-spawned Tumblr called Female Fighters In Unreasonable Armor courtesy of the lovely Ms. Fishlemons. Submit your sword-wielding cheesecake today.

-And for no other reason than that looking at Maxim leaves everyone feeling distractingly nipple-denied for the rest of the day, here's Mandy wearing no clothes: 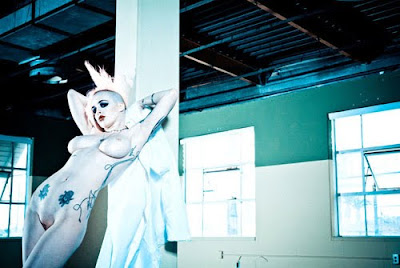 Did you get the flailsnail tattoo pic I sent you?

You've given me a legitimate excuse to buy this month's Maxim.

See I love the images in w.f.i.r.a , others like a whole bunch of tits and ass.

But that's okay because there's many kinds of meals in a day, and breakfast doesn't have to compete with desert.
In fact breakfast and desert can intermingle in most tantalziing of ways, ice cream on peanut butter toast, potato chips in ice cream, bananas in everything, milk and ice cream are pretty much the same thing. Who can forget french toast, that saucy mulatto , bacon and maple syrup together, caring only for their sweet passions. Cream lathered on cereal and cake alike. A heaving pile of salty , sweet, morsels!

those first three GOT books are great. The Dwarf in the books is incredibly funny.

the dwarf is funny on purpose. unfortunately,the prose style is funny accidentally.

Funny yes, accidentally no. From his earliest stories GRRM has always interjected a degree of humor to his prose. The "The Monkey Treatment" is a good example.

No, I don;t mean the jokes, I mean funny as in "funny how poorly-written it is" as in:

-"His cloak was his crowning glory; sable, thick and black and soft as sin."

-"The scabbard was soft grey leather, supple as sin. "

-"Yet the wolf sword actually seemed lighter than the blades he had wielded before. When Jon turned it sideways, he could see the ripples in the dark steel where the metal had been folded back on itself again and again."

-" His hair was grey, what little the years had left him. His robe was grey wool, trimmed with white fur, the Stark colors. Its great floppy sleeves had pockets hidden inside."

Sure, if you want to pinpoint the worse of the worst. But tell me one author who hasn't written some crap in their life. Especially in a 900+ page novel.

" The cool autumn air rang to the sounds of saw and hammer. Men carried timber through the streets, and quarrymen drove their wagons down muddy lanes."

" “They would sooner be dicing, drinking, and fucking, I don’t doubt, but Lord Randyll believes in putting idle men to work."

" A crow was pulling strips of flesh from the ripe ruins of one of the dead men. The other crows had scattered, wary of the crowd of townsfolk who’d gathered in hopes of someone’s being hanged.

All from one page and a good read as far as Fantasy goes. Now If you REALLY want to read some dogshit, thump through the first pages of any Stephanie Myers such as "The Short Second Life of Bree Tanner":

"I stood in the shadow behind the corner of a shabby three- story building, trying to be inconspicuous while I waited for someone to make a decision. Not wanting to meet anyone’s eyes, I stared at the wall beside me instead. The ground floor of the building housed a record shop that had long since closed; the windows, lost to weather or street violence, were filled in with plywood"

You can't tell me you don't want to upside her with a boot to the head from reading that puke.

I really do not like George RR Martin's prose. I find it abominable for pages and pages and pages in a row at a time. Nothing you can say is going to make me like it or not see that as not a fatal flaw in a book.

...And there's people who think the Mona Lisa is a bad painting.

Anyway, you hate the mans writings and I don't and will never see eye-to- eye. Case closed.

I'm glad the article is pro DnD and not just a bunch of Maxim snark.

@Zak - You can disable the lightbox thingy by going to your blogger Settings - Posts and comments - and look for "Showcase images with lightbox" - it's a dropdown menu where you can choose yes or no, choose "no". I hate the lightbox effect.

The Mona Lisa is—fortunately, vis a vis its flaws—not the size of an airport terminal.

Zak here it is:

Good point. I'll take that into account anytime I look at the work of a terrible artist.

Hey Zak! I wanted to let you know that I took your recent post on self-publication seriously. After reading your (and other OSR blogs) for a couple of years, today I published my first module on RPGNow. Thanks for the inspiration! (I even illustrated myself, also thanks to your suggestions!) Keep up the great work!

I do think the mona lisa is a bad painting. entirely too much brown. I've seen it.

@blair
that, on the other hand, is dope.

@digital orc
that is awesome and I hope it works out for you! thanks for stopping by

Sigh... every human female I've ever showed an interest in from 7th grade to present.

I'm sorry, but the entire "Geek Chic" phenomenon is a media created fad and in no way reflects any real social (much less sexual) acceptance of geeks. The examples of "geeks" that the fashion mags trot out look pretty much the same: skinny, photogenic guys with a pair of glasses (e.g. Daniel Radcliffe as Harry Potter) usually dressed like Dr. House and carrying some piece of tech. Sorry, you Madison Avenue trendsetters, but owning an iPhone and a WoW subscription doesn't a "geek" make. My old HR supervisor, a housewife/mother type in her mid 30s, had both of those and she could hardly be called a "nerd."

And don't get me started on the Amos & Andy of the geek world: "The Big Bang Theory."

I will believe that geeks are sexy when I see supermodels fawn and drool over a 300 lbs, socially awkward, male with several skin conditions, lives with one or both parents, and has memorized every Dr. Who episode from "An Unearthly Child" to "The Wedding of River Song."

In the meantime, it's just me, my right hand, and the large bottle of Astroglide.

I do agree that, around 2000, the sudden extension of the words "geek" "nerd" and "dork" to apply to anyone who doesn't follow football or has any expertise in anything was a little weird.

Sorry, you Madison Avenue trendsetters, but owning an iPhone and a WoW subscription doesn't a "geek" make.

Having a tiny computer with you 24/7, upon which you send emails in obscure, jargonistic phrases and running around in an imaginary landscape as a Goth Elf in a chainmail bikini for hours every day doesn't get you into the nerd club?

Your the only guy who can say the Mona lisa is crap and I'll have some respect for ya,

Time for another drink....

Oh--Connie's skin tones look quite yummy in that pic and Mandy's has her quarter angle down pat. I would of under exposed the background by a hairline and "blown out" of the windows by 2 or 3 stops but what the fuck...;...

@ hüth
As I pointed out, smart phones and (boo hiss) MMORPGs become mainstream after bored, Oprah-watching hausfraus (the epitome of bland, white-bread, mundane culture next to the GOP and the Mormons) started joining in. Part of the "geek" mystique is the obscure and esoteric nature of their interests. When computers usage and computer gaming became ubiquitous, how can you call them "geeky."

Good god, she has fantastic boobs!