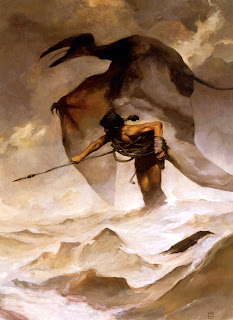 • The cruel and barbarous ways that they adorn themselves

1-With dogs. Each is chained to a dog. Roll a dog.

3-With the skins of their forebears. Each tribesman must grow all fat in his dotage so that his son may wear a suit made from his skin and hide inside it. Nobody knows what they look like.

4-With barbarous tattoooings. Actually they're pretty bright--each tribey keeps all his or all her important info tattooed somewhere. Notes on habits of local fauna, phases of the moon, maps, last time the dog was walked, all that

5-With the garish and mismatching patterns of many animals. So they look like the Misfits not the Danzig When I Turn In To A Martian ones but instead the Jemm and the Holograms ones.

6-No, wait, they do look like the Danzig ones. With the devil-lock. Except it is way longer and at the tip of it is a morning star and they whip it with frenzy in furious battle.

7-With bugs. they a-smear themselves and do bathe in the honeys and spices of their fragrant land and are thus wise in eternity are then surrounded by a halo of stinging and crawling things.

8-With the bones and teeth of their fallen (human) foes which I know sounds like who cares but they HAVE to. So: new and untested tribesmen and tribesgirls have like no clothes upon them because they never killed anyone and the old warmaster crusties have like bonetooth armor so many Harkonnen layers thick they can barely move. Sometimes veterans will not kill you because adding your bones and teeth and the boiling and the drilling and the sewing isn't worth it like cops not shooting you on account of paperwork.

9-With a color code. It's like the Federation but with body paint.

10-With fucking poison. Save or die Mr Touch Attack.

• Their savage and ignorant beliefs 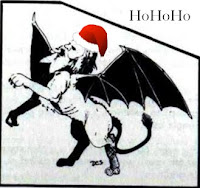 1-Like Marilyn Monroe in that movie The Misfits they don't believe in killing animals because they're innocent. Got no problem killing people though. Any animals involved in their Barbarous Adornments (above) are considered to all be bastards.

2-They believe the soul is contained in the right foot and will evince an unhealthy obsession with severing a foe's right foot, to the exclusion of all other hit locations. They wear a big shoe.

3-They hate food and the eating of food. Publicly. In secret they all eat food (of course) and like it but in company they pretend they don't. It's weird.

4-They don't believe in global warming, evolution, racial equality, birth control or social justice. They do believe in the survival of the luckiest and that the judgments of fate are true and righteous altogether.

5-They believe that emissaries of alien gods are an abomination and will concentrate all their energy on destroying your party cleric.

6-They believe it is blasphemous to use anything that is not stolen. Their equipment, homes, mounts and mates are all stolen.

7-They believe that if they are seen by anyone older than them they'll be owned by them in the afterlife.

8-They believe the first attack must always be a bite. They sharpen their teeth.

9-They believe animals are wiser than men and swarm around any foe their warbeasts attack.

10-They believe that heaven is contained inside an anonymous rock hidden somewhere on the planet.


• Details on the tribe's leader

1-S/he is hideous and clothed in shadow.

3-S/he has a hump like a camel, filled with jewels.

7-S/he hopes to wage war agains the moon.

8-S/he is supple as sin. I have no idea what that means but George RR Martin made millions writing like that so let's assume it means something. Like: s/he is a contortionist and able to twist his/her body into the shapes of the 32 symbols of The Divine.

9-S/he is drunk and silly but has a voice like an avalanche.

10-S/he is, secretly, at the center of all events in the campaign.

• The tribe's most sacred and vile object of reverence

1. A powder with unusual properties.
2. Yak butter. A mound of it.
3. Your tears and those of many foes. In a great urn.
4. A sacred bastard named Choard.
5. The clothes once worn by earless elves.
6. A pitchfork.
7. The spines on the back of a red reptile, dreaming of war for a thousand moons.
8. The night, silence, quiet, stillness and stone.
9. A fat, four-footed weasel carved of lard, smothered in beets.
10. Severed fingers, kept in cloths.

• The twisted shamans that guide them.

1. Atavistic, armed with acid, aided by asps.
2. Belligerent, bony, bedecked with baubles. Breathes bats.
3. A crazed and crooked crone. Covered in clusters of candles.
4. A devious dervish. Dominates demons with a dazzling dance.
5. An eight-eyed exotic. An eater of eldritch energies. Engages in echolocation.
6. A fat faction of fleshy flagellants.
7. A glossy gadfly. Guarded by ghosts.
8. A hebephrenic harlot. Housed in a hexagon.
9. An idiot and an incunabulist.
10. A jovial juvenile in a jewelled jerkin.

Very cool and usable for my stuff! Thanks for the work, Zak!

I adore an alliterative aleatory algorithm!

"4-They don't believe in global warming, evolution, racial equality, birth control or social justice. They do believe in the survival of the luckiest and that the judgments of fate are true and righteous altogether."

I wonder how many parties will find themselves in the savage and benighted "Red Realms."

God damn it, Zak, I wish I had one-tenth your creativity.

Nonetheless, I'll settle for stealing this. Thanks!

PS. I too loved the Seussian alliterations.

Yeah, pfft, I'd be the one to roll up Conan chained to a warpug.

It's hard to sack cities and trample thrones under your sandaled feet when six feet away there's belly rubs.