Chatter On The Wire About Monkeys, Parents And Horror 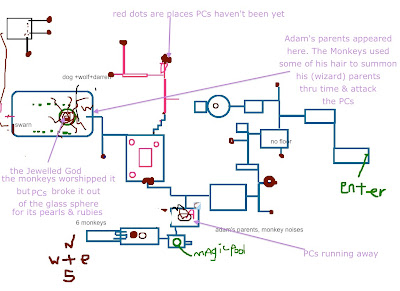 Mandy :We gotta remember to keep quiet so monkeys won't get us

Rog: These monkeys are the talk of the town

KK: Where is the ice medusa?!!

M: We'd find her faster if we weren't always interrupted by monkeys

Adam: Can't believe we had to fight my parents. That is like sooo embarrassing!
A: My suggestion for title of your next blog post on last night's game: "Parents just don't understand."

KK:We totally killed* your parents, it was soooo Midwest.

A: I woulda gone all Menendez on 'em--just as soon as I finished all that important running away and cowering I had to do.

Zak: (to players who had to leave early) They decided to crack open the glass ball and fight the jewelled monster. it didn't go well

Carloine Pierce: it was a terrible idea. Not like it was gonna get out lol. Oh well! Still fun :D

M: I'm bored of killing monkeys!! I think squamous monster is a challenge

C: True, but it's a challenge most of us are useless against lol :D

M: Almost everyone has some magic item of some sort

M: I think we can do it!
M: I can help on the hp front, rage won't help much though
M: unless you rage with a magic weapon! i have lvl3 rage too now


_____
Note: Adam's parents were knocked unconscious and then the mysterious hourglasses hanging around their necks were crushed, at which point they disappeared. Had they been actually slain, the consequences might have been...different.

Just to be clear, it was Adam's character's parents that were killed? You didn't use his real parents as NPCs that got killed?

Dude WTF where did my parents go?

Come to think of it, I haven't talked to my parents since the game...

Beware the monkey for they are evil little bastards.

Question related to recent G+ convo.. Did Adam come up with his characters parents via character background, or did you come up with them Zak?