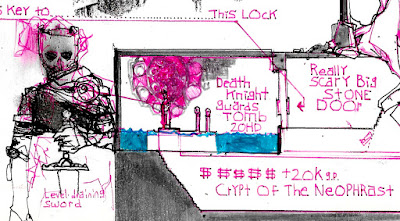 When I was working on Violence In The Nympharium for LotFP the idea ended up being100 linked short adventures, so the first thing I did was go Ok we need lots of different kinds--the murder mystery one, the horror one, straight dungeoncrawl, interdimensional lunacy--everything I could think of. 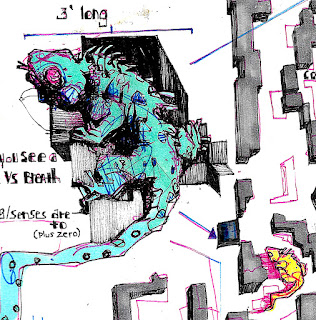 So I did one about moving through a maze (like a literal maze this time) and trying hard to get a treasure without seeing a basilisk. The size scale is drastically reduced, gaps in the maze are sometimes 1' wide or less, some are just big enough to look through.

The default rules of D&D aren't meant to deal with this--you can move 30-60' in a six-second and I've built this adventure where a player needs to make tactically important left-right decisions every four or five feet.

This is where its nice to be able to draw it all out in the middle of thinking up the adventure rather than write the whole module and then hand it off to some other person to illustrate--the more of the problem I can draw, the less I have to write. By drawing the labyrinth up front I can go "Ok, let's say the basilisk hears you, how long does it take to get to you? Do we need rules for how it moves? Can it climb walls? What if the players climb the walls?" etc.

When you normally draw a dungeon, you put a little square with a "T" and then write "Pit trap" and move on with your life. By drawing the whole trap and the entire mechanism, Grimtooth-style, I managed to make this one into an adventure that'd keep a party busy for forty minutes or more.

Once I'd done a few of these, I realized this kind of stuff is so relaxing when I DM with it--like when you have one of those stress-DMing situations where you've spent weeks trying to set up a day and everyone is finally available and then the day comes and your head is in five different places and you're like oh fuck game in an hour but I haven't done laundry but if I pull out one of these "activity book" -style adventures--oh man everything is right there. No abstraction, no trying to keep track of people, it's has an 8-bit video game clarity that I can just cruise on. It's easy to stretch parts out, go into descriptions, take your time because you have all the problems the players are about to face very clearly laid out.

Obviously this approach doesn't work with everything--Castle Terravante from the first Cube World is a social adventure about a weird love triangle and drawing the castle itself and drawing little weirdoes with rapiers in it with arrows pointing at each other doesn't get you very far, you still are stuck having to invent situations and act NPCs and the majority of the adventure is going to have to be improvised around their personalities. You are less CPU and closer to just being another player (one devoted to making life...challenging..for the other four).

But when you can do it, it's nice. And it's fun to try to figure out new things to draw and what possibilities that opens up. Like I have this one notebook which is printed with a page of angles, they're presented in degrees but also as fractions over pi, so if the halfling economy is based on pi, and halfling houses are always round then...

Anyway, the new one I just put up in the store last night is a pack with three of these: The Labyrinth of the Basilisk, The Deep Trap, and The Old Empire--a like 50-room dungeon all drawn in cutaway view.

thanks ! If you want it published, find a big RPG forum and post about it.