Note: This post has gotten Redditted so that, of course, means stupidity.  A lot of harassers are trying to use it rhetorically (and repeating easily refuted bullshit) to suggest that pointing out actual, real abuses in the indie scene by harassers like John Harper, etc are just some minor interpersonal beef.  The links to what people did to deserve being called out are in the text. Address it if you like a working RPG internet, there's a lotta eyeballs on Reddit. Also, definitely hit the report button. You can't have a healthy RPG scene if bullshit isn't immediately and constantly shut down.

So if you haven't heard the news, this is a fairly accurate summary of Friday's annual Ennie awards for achievement in RPGs at Gen Con: 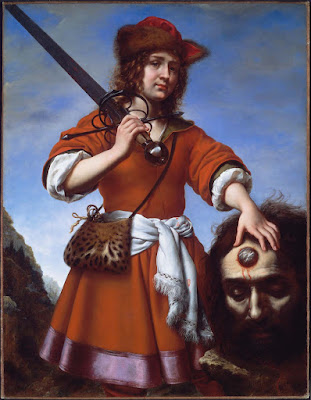 This isn't just a post about how awesome that is--I also want to talk about what that means, because, contrary to popular belief, it doesn't mean fuck-all.


The Judges and the System

The Judges' spotlight awards--awarded by Ennie Judges to things they personally thought were worthy--give us a good idea where the committee's heads were at:

Eloy Lasanta, Carol Darnell and crew won one for the Pip System--definitely deserved, especially considering Eloy's hard push to expand diversity in games (he also won won last year)--and Eloy gave a nice speech. (Also another on behalf of a friend for Best Free Game.) A few other judges nominated games I knew nothing about--which was cool. That is: they didn't nominate any licensed mainstream backwash or indie-game hipster Usual Suspects. The chatter online often obscures people who are working hard and not talking about it in places that echo enough.

....and two awards in a row went to OSR/DIY RPG folks, starting off with Judge Reece swearing aggressively and entertainingly into the livestream and going on for quite a bit:  Fever Swamp by a team including Luke Gearing, Andrew Walter, Daniel Sell, Christian Kessler and Jarret Crader and Operation Unfathomable by Jason Sholtis of the Hydra Collective. With extensive shoutouts by winners to a lot of OSR peeps and blogs.

Now these judges, I've heard, caused some sort of fracas behind the scenes where the Old School/DIY RPG-philic judges were accused of being mouthpieces directing undue attention to the barbaric and unruly OSR which somehow gamed the results.

I'll be the first to point out that the system of judge-choosing seems less than perfect and kind of electoral collegey (the judges talk about their fave games and give their real names, we vote for judges based on that) but this is important:

All of this year's indie darlings were also on the ballot in one place or another this year as well as every single major publisher in games (except WOTC and Fantasy Flight, who I think didn't submit). Once nominated, The People are just straight-up allowed to vote. And it was a slaughter.

The awards may not represent total democracy, but they do represent what people were moved to support more from the multiple choice options given them.

-Scenario from Ontario wins Best Electronic Book, making for the funniest thing all-night:James Edward Raggi reading a short speech written by Zzarchov Kowolski and Kiel Chenier. They've both GMed me and I liked it and they deserved it. 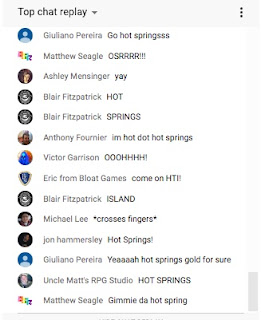 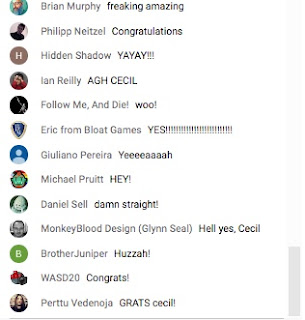 -Frostbitten & Mutilated got more than any one product (EDIT: oh wait, the Delta Green RPG got 4 as well) and I was Mr T-ing around with ones for Best Interior Art, Best Monster/Adversary, Best Setting, and Best Writing beating Monte Cook Games, Green Ronin, and Starfinder (in their case: three times). (I thanked a lot of people but, to my eternal shame considering how design-reliant the book was, graphic designer Luka Rejec. Sorry Luka. Those speeches here, here, here, and here. I was actually not drinking yet: this is just how New Yorkers talk. I got very drunk later though so don't worry.)
-In the case of Writing and Setting, I am happy to say Chris Spivey's excellent Harlem Unbound got two golds over my two silvers along with several immediate offers of employment, (his heartfelt acceptance speeches right after mine in those links up there) and Harlem artist Brennen Reece also picked one up for best cover.

-For Product of the year, Daniel Fox's Warhammer do-over Zweihander beat not only Starfinder and Star Trek, but the extensively-talked-up-and-advertised sure-thing-shoe-in Blades In the Dark from axis-of-indie-shitheadedness John Harper and Evil Hat. Zwei also took Best Game from Blades and fellow indie-darling Red Markets. Speeches here and here.

-Paizo's Starfinder was nominated for 8 things and got only one: a Silver to the OSR's Glynn Seal/Monkeyblood's Gold for his cartography in Midderlands.

-Monte Cook Games was nominated for three and got none.

-The only thing Green Ronin got was a silver for a Critical Role tie-in.

-Evil Hat got only one thing, Best RPG-Related-Product for a licensed card game.

-All the other indie darlings involving harassment-clique members that were nominated got totally stiffed, except a podcast--Fear of A Black Dragon (they had puritan hatemonger Anna Kreider/Wundergeek on their parent podcast, the Gauntlet, they still haven't removed the episode or apologized).

-Cthulhu franchises picked up whatever the OSR hadn't nailed down--Chaosium won Silver Fan Favorite Publisher which meant we got to see arguably-greatest-living-game-designer Greg Stafford go up and make a speech then WOTC got Gold and...nobody went up.


Moral of the Story

1. Nearly all of these losers from big companies were produced by multiple authors.

2. Nearly all of these losers from big companies sold more copies than the DIY products that beat them.

3. The people who bought them generally heard about them online--the same place they would've heard that they were nominated for awards...

4. ...and yet, once they purchased or Kickstarted these Goliaths, they didn't really care about them enough to throw support behind them when they went up against the Davids they vastly outsold.

Like Dylan Moran's mom once said: It doesn't matter how big the other fucker is, they all have a neck.

The "neck" in this case is talent. No matter how big your game or your license, there is still--somewhere in the gears of the machine that produces RPGs--a need for people who actually can do things better than other people. That's why people like Kenneth Hite keep getting hired up and down the street year after year.

Is Fever Swamp going to outsell Starfinder? Of course not. But are the people who made Fever Swamp quite possibly on their way to positions where they get paid more than anyone on Starfinder--either as an indie making a fair cut of a smaller profit or as a respected hired-gun wooed by a big company? Fuck yeah. People who won this year have gotten business offers almost immediately. And business offers mean you can keep avoiding your day job.

So, good luck to y'all making your thing. I hope you beat me next year--it'll be hard 'cause Demon City'll be out by then, but, again, I would be happy to lose--I have enough of these already and a pair of day jobs I happen to like. 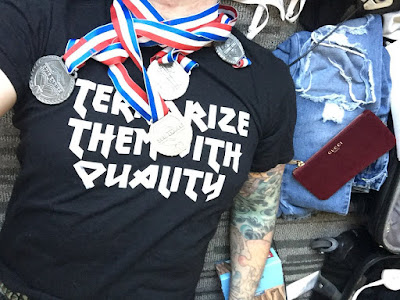 I’d absolutely buy one of those shirts if you started selling them.

Well said, and well done everyone!

Happy to see the OSR got their recognition again this year, keep doing what you're doing! Ennies = sales, I clicked on over to purchase Fever Swamp and Operation Unfathomable after the live stream and was impressed. Vornheim was a turning point showing me that great quality products don't have to come from big companies. I'm happy that my bookshelf can be filled with books that inspire me to be a better GM.

I'm looking forward to Demon City giving Chaosium a run for their money next year :)

I think Jez Gordon is selling them