…and then the cleric became a stomach

So our session begins with Ela Darling's ranger ably employing her charlatan background to continue to pretend to be the Black Knight, champion of the Black Wing Church of Tiamat. They walked into the Black Wing camp which was pretty much an '80s Realms of Chaos pain-carnival and, secure beneath a natural 20 Intimidation roll, took up residence in the black knight's tent, got the spellcasters some much-needed rest, told the concubines to take a hike... 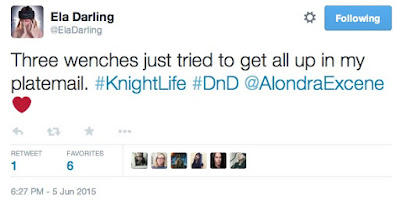 ...and then looted it. They scored lots of weird items including a set of teeth that:
a) Blind you when you're bit with them
and
b) When placed singly in your mouth, allow you to channel the dead souls of those slain by users of the teeth.
…which lead to a brief encounter with Unwerth the Obese, a dead jester of northern extraction, who was all "So carriage rides? What's up with those?"…anyway...

The group then sat around trying to decide what to do next.

Brian the wizard (aka Brian the Dragonslayer) then had a decent idea: since Laney was the Knight Viridian and Ela was pretending to be the Black Knight--why not try to take out a few of the the other five Knights of Tiamat before the upcoming tournament to even the odds? They snuck over to the next closest camp--the irradiated camp of the Cobalt Claw.

Brian the wizard (aka Brian the Dragonslayer) then had a terrible idea: walk up to the guards and say they were adventurers with information to sell.

This was a terrible idea because the dragon that Brian the Dragonslayer was renowned far and wide for slaying (and whom Brian has bragged about slaying in every town from Voivodja to Vornheim) was Ferox the Incinerator, god-dragon of Cobalt Reach.

"Take us to your leader we have information"
"Wait here…"
"Guys I totally got this"
"You say you have information for the Cobalt Knight?"
"Yes! I am Brian the…wizard. I have information to sell, but only to the most powerful faction, is that you?"
"Of course, the Cobalt Claw is renowned far and wide for its mastery of magics far beyond the fallow cosmologies of the other Churches"
"Oh yes, I know the Cobalt Reach well…"
"Indeed, Brian?" (Blue wizard succeeds in a history check) "Yes, I will hear your information, come right this way into my tr…I mean tent, …" 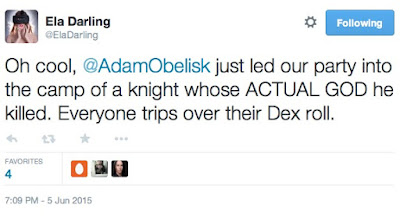 So then there was a magnetic trap. Everyone was caught, for the most part. There then ensued a combat, made hilarious by the fact Lunessa the thief had just found a ring which reverses the value system of everyone in a 15 foot radius (friend and foe) which got put on and taken off again twice.

To make a long story short, everyone eventually got away except the druid's owl (killed by a lizardman), the druid's dog (killed by a reptile woman) and the cleric, Mariah, who found herself scrabbling out of the tent into the gaze a passing cobalt beholder.

…which resulted in this shit:

I roll that the beholder can get two of its eye rays to bear this round:

Mariah fails her save.

Just as crucially, 5th edition D&D's Stone to Flesh works in stages: you get petrified a piece at a time.

Then the beholder aims the disintegrate at her.

Mariah fails her save again.

There is a wailing and a gnashing of teeth at the table, Mariah is turned to a fine powder that not even the 17th level cleric's Resurrection can turn back into a person…

….except the part of her that was just petrified. I roll the body part die…

…so the wizard manages to telekinese the stomach to safety.

With any luck and a day to rest, the players can prep Flesh to Stone or Greater Restoration, then turn the fragment into a disembodied stomach and then cast a full Resurrection thereafter on said stomach. Until then, Mariah the cleric is naught but a belly... 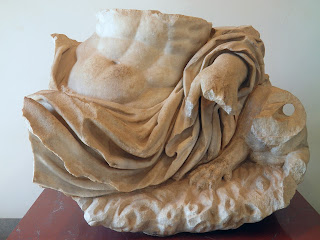 1) Brian's plan sounds like most of my plans
2) Stomach story is good story.