I was thinking there should be a robots-in-the-city game that does for underground hip hop and electronica what Vampire: TM did for goths. I haven't written or more importantly drawn it but it did get me (and False Patrick) thinking about robot games.

After thinking about it way too much, basically I decided the one thing robot games need to have that others don't is hit locations. 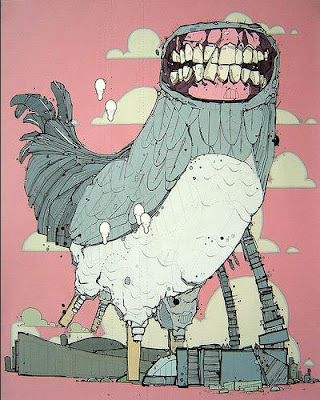 Here's some work toward that:

Body parts used as weapons (punches, kicks, headbutts) generally inflict damage equal to their armor rating. So if your arm is armored up to d8, it does d8 damage when you punch people.

Attacker rolls the damage die of the weapon you're using and chooses a body part to attack.

Defender rolls the die of the armor for the body part being attacked.

If the defender rolls high: no damage.

Attacker rolls high, it inflict a number of criticals on that body part equal to the disparity in the dice.

This then requires cool d100 critical charts for each body part, but that's the basic idea. 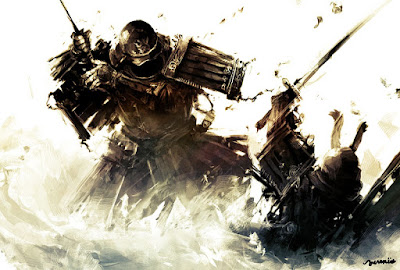 Also probably want to work in a mechanic where if you give up your attack for the round (or maybe accept a penalty) you can first roll an Agility Die (likewise rated from d4 to d20) to avoid the blow. Beating the opponent by a little means you shift the attack to another limb (or a shield) beating them by a lot means you dodge altogether.

This means the defender is often rolling as much or more than the attacker, which actually seems appropriate for mech combat.
-
-
-

This is interesting. I've run many a mecha game, and at least one short campaign where the PCs were robots (kind of droid-like, kind of more than that).

Damage was done in Rolls. A certain Cannon does 4 Rolls of Damage, a Grenade does 3 Rolls to an area of people, then 2, then 1. That sort of thing.

Rolls reference a Random Chart (one of the rare times I use such things), and can result in Main System Offline, Weapon/Device Malfunction, Weapon/Device Offline, and such.

It was really fun. We didn't need hit location because if the player said, "I launch missiles at his head", and got Main System Offline, you just figured out what the main purpose of the head of that robot was, and whammo, you knew the effect.

I do like your version quite a bit. I will have to give it a try.

I'm also a big fan of this. Sorta reminds me of Rifts mecha having different MDC values for all of its body parts. I found Rifts a little clunky in this regard, since most hits were to the body unless you were taking a massive to-hit penalty, and even then nothing much happened unless you destroyed the body part. I like the idea that there are more delicate systems beneath all that armour which can get jammed up by combat. Its a super cool idea, has a lot of promise

That's not bad, but you still need quite a lot of dice rolling.

I wonder, maybe a deck of special cards would work better? You would just need to draw some exploding robots on them. The player winning a combat round, hitting the enemy, dealing damage, etc, draws X cards, where X is the player's skill or the margin of success and picks one to apply to his or her enemy.

Dice rolling is fun and creates tension, I don't see "a lot of dice rolling" as a problem.

The card mechanic seems fine, though if we assume a standard deck of 52, you'd need a deck at least 8 times that size to handle all the crits this system would provide

What about for dodging you try to roll lower on the same die as your armor/damage? This way weaker limbs are also faster than stronger ones.