Something Is Deeply, Deeply Wrong At RPGnet Today...

Just screencapped the active topics on RPGnet's D&D board: 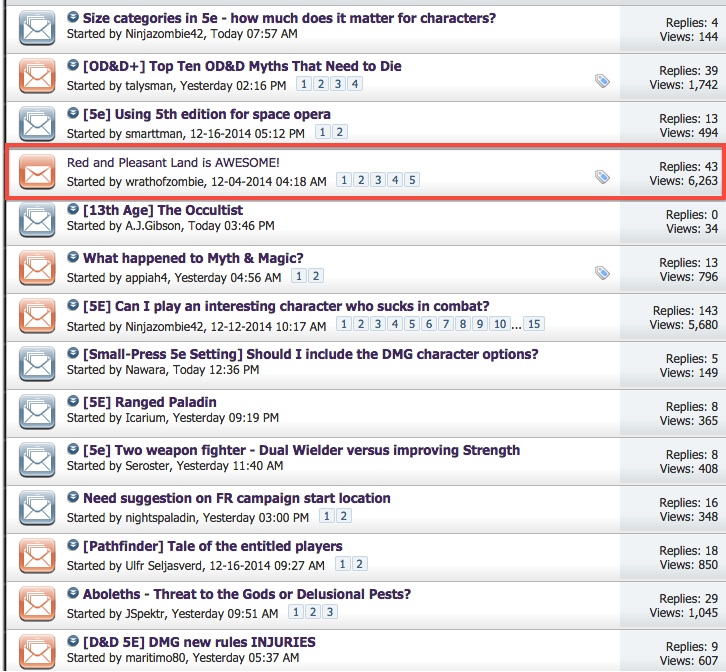 So, not only is dominated by 5e, Path and old-school stuff, but the Red & Pleasant Land thread has 6,000 some views and been up for two whole weeks, yet the RPGnet trolls haven't showed up once.

The owners still subscribe to a server that runs sexist ads, the moderators still include people who claim my publisher is the spawn of the devil, and people who openly launch misogynistic attacks on women in my group are still members in good standing, but they all seem to be too scared to say a word.

Maybe they got so completely embarrassed about how gullible they were during fracas about me consulting on 5th edition D&D that our long subcultural nightmare is finally over.

Which is awesome, because with the trolls dead it hopefully paves the way for some amazing stuff on the way to be seen and talked about without having to wipe foam from anyone's face:

Broodmother Sky Fortress (the world's best introductory D&D module) is coming soon and DIY D&D godfather Jeff Rients is working on something else, Noisms wild opium dream Yoon-Suin is out any minute, Chris Kutalik is working with some amazing artists for his Slumbering Ursine Dunes projects, and rumor has it Scrap Princess and False Patrick are working on something for Mr Toxic Influence On Our Youth himself, James Edward Raggi.

It is so cool to think that maybe maybe maybe enough billy goats have crossed the bridge that finally people new to the hobby can read about cool new DIY D&D stuff without having to wade through psychotic whining about how Jeff's a clueless nostalgist, Noisms is an imperialist cultural appropriator and Scrap must be hungry for your babies because she's trans.

But then I guess I shouldn't be that surprised--if you check your Chinese menu, 2015 is the Year of the Goat. 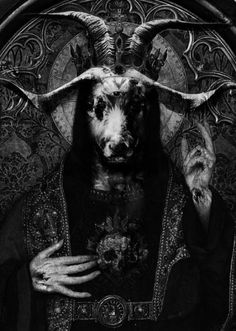 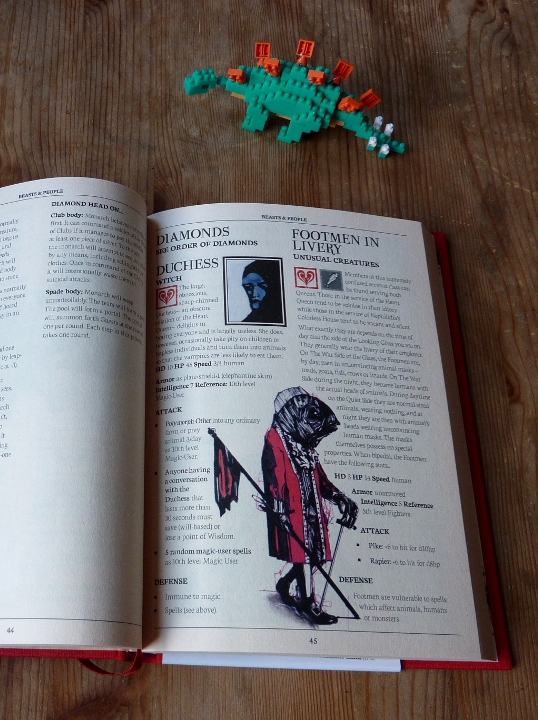 This is a superb book - beautiful and weird. I purchased the pdf, and then broke down and bought the book in hardback as well. You richly merit the praise it has garnered.
As for the trolls, perhaps they have been chastened by consultantgate, cowed by the praise, or are hibernating during the winter solstice. Hard to say, but let's hope it's not merely the latter.

I fear you are indulging in wishful thinking Zak. Fascists have no shame and no memory for their own misdeeds. Maybe your adventure book is really just that awesome. I never read it but I have read a few reviews and they are all positive.

Is there no US distributor?

not directly for the books at the moment, but the LOTFP site has a 10euro shipping cost ceiling and will happily convert your dollars to euros.
IF you wait a bit there might be US distribution--but if you wait a bit they might all disappear, too.

Your headline is misleading. There is something deeply wrong at that place every day.

Have to pick up a copy soon. Jim only brought 20 copies to the UK (duh!) so by the time I had struggled in on public transport they were all gone. Looking forward to it.

It goes to show you that there is more in this world to unite us then there is to divide us.

Looking forward to my hardback arriving. Just got to force myself to not read it all in PDF so I can properly enjoy the hardback. Then got to start running a game on PBP if I can, but somehow I think it will prove harder than most systems. :)