So ok, everything you've heard about Hobbit: Battle of Five Armies is wrong.

First, you'll hear people being like "This movie sucks". They're dumb and wrong, as this short post-movie conversation with Connie reveals:

Zak: "Listen to this review: 'Bilbo Baggins is the only character capable of eliciting genuine reactions from the audience'."

Connie: "Uh, really? What about warpigs?"

C: "What about trolls with morningstars for legs?"

Who doesn't have a genuine reaction to wargoats? Nobody I wanna sit near.

Another thing you'll here is this is not a very faithful screen adaptation.

This is a totally faithful screen adaptation--of Warhammer Fantasy Battle. Which is a way better thing to be faithful to than Tolkien.

Now you might think "Well I have heard the script is a little weak". NO. It's just this is how fucking metal this movie is.  In the grimdark screenwriting of the Fran and Filippa there is only war. And that's good, because, dude: war   goats. Yeah.

Now if you've seen it you're also wondering what's up with Bilbo knocking down like three or four 10' tall orcs in a row by hucking rocks at them. What's up is Bilbo is clearly doing ranged backstabs and must be doing x 4 damage (rock=d4, average 2.5. Times four = 10, which is respectable and could probably knock down even a tough orc if they'd already taken melee damage) and they don't see him because they're in melee with other guys and it's a frenzy.

But how did he get leveled up that far because he's definitely 1st level (or even 0-level) in the first movie.

Ok check it: assuming Jackson's giving xp only for monsters and treasure (SPOILERS below if you never read the books or saw the movies):

Session one: dwarfs clean dishes, contract lunch, all that, then the party kills 3 trolls. Session ends. Bilbo gets enough xp to hit level 2.

Session 2 starts: The party finds Glamdring, Sting and other weapons in the troll hoard, plus kill some orcs on wargs. Level 3.

Session 3: A bunch of social bullshit with elves and the moon. Then the party gets ambushed--Bilbo fights a goblin, most of the people playing the dwarfs and Gandalf have doctor's appointments that day so it's mostly solo and Bilbo does the whole riddle-game with Gollum. Scores the One Ring. You can't get more than enough xp to level up once in a single session, so Bilbo goes from level 3 to level 4 without anyone realizing this is an Artifact.

Session 4: Guy playing Gandalf gets back from the dentist, the dwarves fight a ton of goblins, and the Great Goblin. Lottttts of xp for the whole group, Bilbo gets an even share. He's level 5.

Session 5: The party is chased by the White Orc and his minions--during this sequence Bilbo kills a warg, then an orc. Then there's all the pinecone business and they're saved by Gandalf casting Summon Eagles I Keep Forgetting About. Level 6.

Session 6: Buncha bullshit with Beorn and his flick eyebrows, then Myrkwood/Mirkwood/Murkwood and giant spiders. Level 7. 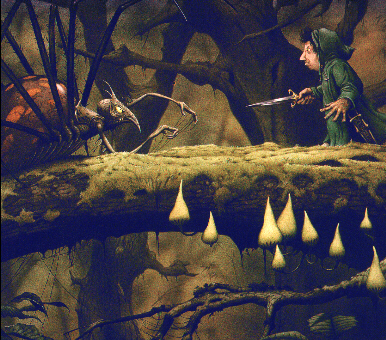 Session 7: Elves capture dwarves. Bilbo does a lot of Move Silently which he can because he's a level 7 thief. The wonderful, inappropriate Six Flags Magic Mountain barrel-fight happens during which the dwarves kill lots of orcs. Bilbo sponges his share of this xp: Level 8.

Session 8: Ok, a lot of sneaking and talking and negotiation and Lake Town at the beginning of the session but then Smaug. Clearly the deal here is--even assuming Bard is some dumb deus ex machina DMPC--the party gets a share of xp off Smaug for shaving some hit points off before Bard's called shot to the wyrmbelly.

This leaves Bilbo at Level 9 before the Battle of Five Armies even starts. Though he is still smart enough to avoid melee as much as possible.

P.S. Jackson's Gandalf is clearly Vancian--he's out of spells for the whole third movie.

2. Here Have Some Toys

The Winners of the D&D Widget Contest...

...are two people. Try the toys they made! Because both were cool:

David Coppoletti's Dungeon Remixer using pieces of my and Jez Gordon's Red & Pleasant Land maps. I can't wait to see what else he does with this in the future. 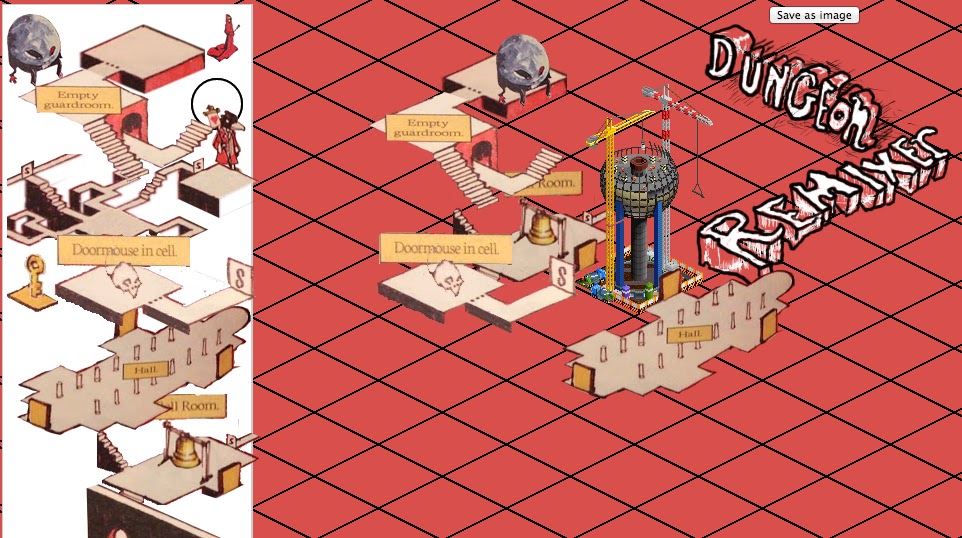 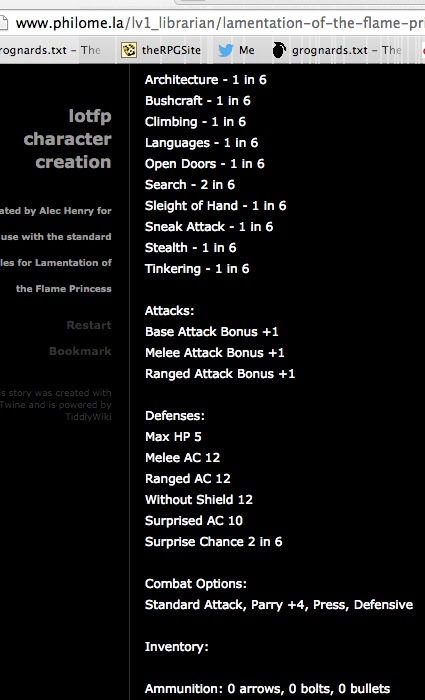 ...these two can email me their mailing addresses to which I will send signed copies of Red & Pleasant Land.

Telecanter is on fire with the cool magic items lately.

5. If You're Wondering About The Book, This Review Has A Red & Pleasant Land Flip-Through.

6. If You Are Smart And Already Ordered Red & Pleasant Land And Want To Know Where Your Book Is...

Raggi lays out when every recent order shipped--RPL or otherwise over here.

1. Telecanter is always on fire. He and Necropraxis are the most creative people on the scene of you are a heap bastard and just glom up the free stuff.

2. Five armies is awesome. Dwarves fighting in packs is poetry in motion. The Hardy Boys have nothing on a pack of dwarves.

BEST HOBBIT REVIEW YET! Thanks for this...I would also like to point out that in the third movie we have the BEST FUCKING SPELL EVER CAST ON FILM! That Elf Witch drops a seriously insane BANISH PERSON after getting up from Unconscious. Without a doubt the greatest spell I have ever seen cast in a film! In fact that entire boss fight is one of the greatest combat sessions I have ever seen...

How about when the ELVES jump the Defensive Dwarfish Line [I know I know, Tolkien was WRONG]...I do not remember EVER cheering for tree fairies like I cheered during that leap...so good...and the War Goats are rad, but what about the GIANT EARTH WORMS? So awesome--I mean like a way better visual representation than anything in ANY of the Dune movies...just so good...

It seemed pretty clear to me that the tail was wagging the dog pretty hard in terms of GW advising the filmmakers on aesthetics. Too many of the characters seemed like they were intentionally designed to make cool Games Workshop licensed miniatures, and they all had the GW aesthetic.

It's cool, at least GW finally got to unleash some of their vision on the big screen. Maybe this will lead to real whfb movies if the action figure sales are good enough.

Peter Jackson has been a Games Workshop fan for quite a while. He even had two of their designers make cameos in Return of the King.

That the person playing him was at the dentist (was getting laid, overslept, got called in to work, etc.) is actually the best reasoning I've heard for Gandalf's frequent capricious absences in all the Middle-Earth books.

Hey, thanks. I put a magical book in my previous post as a hat tip to you :)

My copy of RED AND PLEASANT LAND just arrived. This is a beautiful book. Wow!

I am a tabletop virgin who recently received Red and Pleasant Land with a possibly dumb question: Is it possible (i.e. within the realm of a beginner) to run a game with some fellow newbs with only LotFP and Red and Pleasant? Or do I need prior experience with Dnd or something? I just really love the blog even though Im not a gamer and the vibe and aesthetic of your work is super captivating. I thought I would give it a shot. Thanks!

That is a good question: it is possible to do that with only LOTFP and RPL.
LOTFP has one of the two best intro-to-roleplaying sections in the hobby. Butifyouhave any questions, come by and ask

Alex's character builder's URL has changed, its now at: http://www.philome.la/lv1_librarian/lotfp-chargen/play and includes the Alice class.

Excellent Five Armies review! Best of the three for sure. And yeah, waaaay better than the original. Elves leaping over dwarves, warriors, and Galadrial for the win!