The Horrible Truth About Sea Elves

Assembled here, with much help from the braintrust. 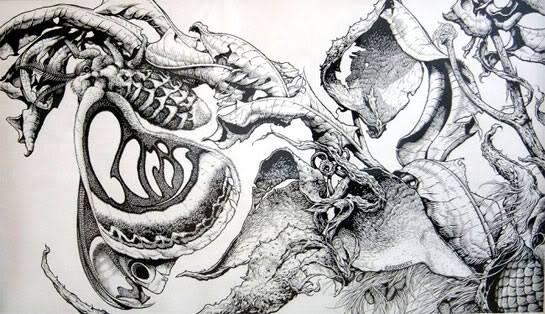 "They don't know what to do with the surface world-if there's anything to gain from it or not- and so every interaction is an experiment for them...with no explanation provided. The ones who savagely attacked your boat and killed your crew last month? They're back...to trade seashells and breathing moss. Next week? They might be back to try and seduce you into drowning, or give you your enemy's secrets...or both.﻿"

" Sea elves are dead elves.  The ones that don't make it to the Undying Lands all drown, and haunt the ocean.
Sea elves don't believe in the surface except as an exercise in philosophy.  There is no intention there.  If you get killed by a surface dweller it's the same as if you had died of a heart attack.
Sea elves burrow themselves in sand and gnaw on coral.  Sea elves draw lewd pictures on the sides of ships while sailors are sleeping.  Sea elves sneak aboard and put their babies in your food supply.
Sea elves have a million babies per spawning.  Little pink things, like lice.
Sea elves are only very distantly related to elves, although the adult molt looks appears similar.  They're closer to shrimp.
Sea elves are all female.  Male sea elves are foot-long tentacle-things that have long since fused with the female's scalp, a la anglerfish.
Sea elves use their young for currency.  Food, labor, and investment.
Sea elves travel beneath the continents in lightless tunnels.  Their maps of the underdark are excellent, although a couple millennia out of date.﻿"


"Same as regular elves, but they drowned. They continue on in a watery undeath. If they leave the water, they fall apart. Their inhuman motives occasionally require drowning a new elf to add to their ranks. Their obscure sense of humour sometimes involves drowning other species as well, though they just die. If you let them know you don't think it's funny, they may think you're boring, but might stop trying to drown you.﻿"

"The elven species is ancient enough that they were among the first lifeforms to make it to land. Now I'm not talking about ancestral species of the elves making the jump to land via standard evolution, but the actual elven species jumping from sea to land in a Lamarckian fashion (but still are the same species.) This is the reason elves are so slow to respond to changes- they have to will or otherwise render themselves/their offspring into transforming.

The aquatic elves are the "hidebound" traditionalists (so called by the land-dwellers) who stayed behind. They still evolve/have evolved for different functions in the water through time, but see the land elves as "cop outs".  Because of these differences of opinions regarding land elves (or rarely, winged elves). war oat least skirmishes,  between the the aquatic elves and the other subraces of elf.

Because of their increased focus on evolving in the water instead of adapting to land, you can see greater variance of shape and structure in the aquatic elves. Fist-like, octopus-like, even more implausible things like seaslugs and microorganisms.﻿"

"
You know, even among ocean animals, sailing is probably faster than swimming.  Just think about what kind of ships a water breathing race would build.﻿"

"
That's really good, Arnold. They probably build ships with sails on top but you climb into the bottom and it's filled with water. Or steal surface-ships and modify them. Damn that's good Arnold﻿
"
-Z.S.

"
Sea Elves are related to the tunicates, or sea squirts. They look like mermen, kind of, when they are young, but longer and more eel like in the tail. They eat fish, squid and sea cucumbers for salad and use giant diatoms like frisbees to take down seabirds. When they get old their kelp like hair binds them to reefs and they become sessile, sucking in water through their mouth and blowing it out of their gill slits through a baleen structure they lick plankton off of with comb like tongue. The body withers away, though unlike ordinary sea squirts they retain a spine - it becomes a waving frond extending nerve fibres into the open water enabling them to sense their surroundings as their eyes and ears atrophy. Eventually they are nothing more than vast mouths with broken teeth, siphoning gallons of water a second, and communicate through bioluminescent nodules on the spine. Being immortal you might think they would be wise in the ways of the deep, but sadly over time they become so dull even the Isopods fall asleep to their reminiscences of big waves and unusual salt levels.﻿
"
-B.B.

"
Cities will not be strongly attached to the ground, but arranged like huge inverted chandeliers. Buildings of fallen coral and bone made in strips ike kite-tails. When the current shifts the whole city slooowly shifts with it and the buildings are always moving slightly﻿
"
-P.S.

When they are young the sea elves live near the coasts and the surface, and they are consumed with espionage and the selling of information. Barnacles are their spies, which they attach to whales, sea turtles, and ships, and wait for them to come around after voyages or migrations of thousands of miles. The barnacles record all that they see in the ridges of their shells. Each barnacle is matched to a single sea urchin, known only to the sea elf that cultivated them both, and its secrets can be played when a particular spine of that sea urchin is dragged across the ridges of its shell.

As the centuries pass, each sea elf that survives the intrigues of the surface becomes vast and irregular in form, and slowly settles into the abyss. The mature sea elves are still obsessed with information, but now they take a longer perspective. They taste the silt that settles out from the mouths of rivers and listen to the slow grind of the continents. To make permanent records, they swim slowly back and forth through the slow rain of organic matter from the surface, interrupting its fall and thereby tracing symbols of enormous width and breadth but minuscule thickness into the endless black plain of the deep sea bottom. In time this finely-laminated ooze becomes compressed into mudstone and then slate, and in this way the accumulated writing of the sea elves becomes woven into the very fabric of the world. Hand a magic-user from the surface world a piece of slate from a mountaintop, and if she is very sensitive she may be able to decipher some of the symbols that are partially impressed there, but these are only tiny fragments of stories, poems, arguments, and spells that once spanned leagues of the ocean floor, and now wind their way through entire mountain ranges.

"The horrible truth about sea elves? They don't exist. Oh there's something down there, all right. Something comes up from the deeps now and then, filling sailors' heads with images of their beautiful women, their songs and their ships. Something stirs up the shark-toothed barbarians of the deep sea. But there are no sea elves. No coral cities, not even ruins. I

"Don't believe me? Consult the gods. They have never even heard of such creatures. Interesting, no? I wonder what they truly are, those shapers of memory..."