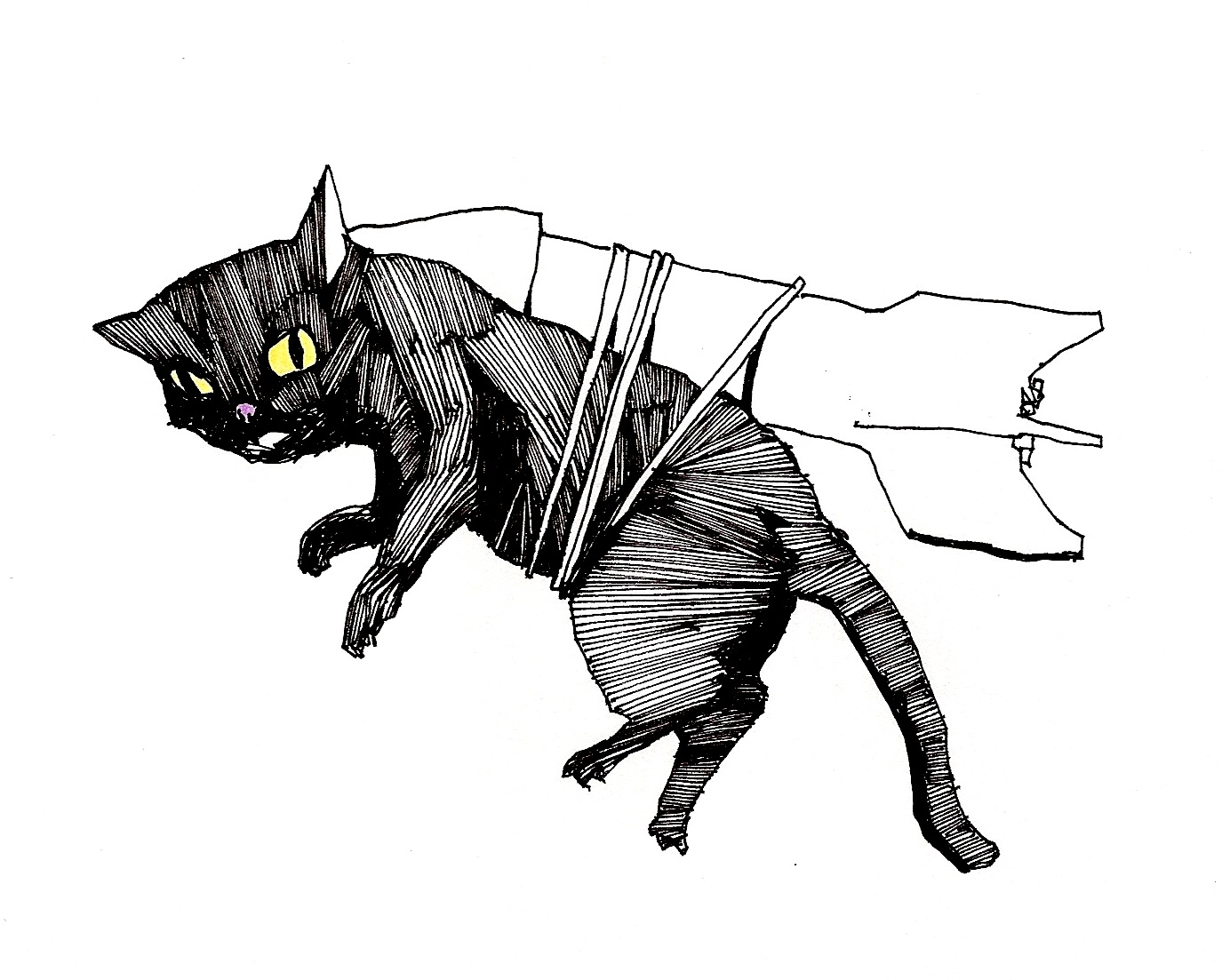 I have an article up over at The Toast:

On March 5th, the Associated Press asked: “What are seemingly jet-propelled cats and birds doing in a 16th century German artillery manual?” It was a good question.

What the cats and the birds were doing was the same thing everything else in the manual was doing: being recommended by one Conrad Haas as instruments of war.

The sparse comments from the historian the AP interviewed were even more unsettling than rocket cats are already: “I really doubt this was ever put into practice, it seems like a really terrible idea.”

First: “I really doubt”? What is that? Like, isn’t the historian rule that you do history until you’re sure there aren’t rocket cats and then you talk to the AP after that?

And then second: Click here to read the rest.

Mallory Ortberg called it "funny as shit" which, coming from the world's funniest misandrist, is high praise. Special thanks to Nightwck Evan for historical expertise.

Also at The Toast (and D&Dish), is a great piece by Anne Thériault on how before fairy tales got turned into cautionary tales for children, they started as stories women told to each other about their lives and ideas….


Wilhelm also began to alter the structure of the tales, introducing moral judgments and motivations that previously hadn’t been there. Traditionally, fairy tales had seen luck and chance count for more than hard work and obedience, but Wilhelm put a stop to that – instead the sweet, well-behaved, godly women were rewarded, and those who deviated from that mold were punished….And so fairy tales began to feel less like women’s stories and more like a guidebook for how women were expected to behave. MORE
I find this extremely resonant in the ongoing "RPG-as-imagination-exercise" vs "RPG-as-surrogate-parent" debates, but it's also just got some neat historical and fairy-talical tidbits generally.
-
-

Who are the people arguing that RPGs should be "surrogate parents", and what exactly do you mean by that? That sounds really weird, and it has me curious to see it.

I take the 'surrogate parent' argument to be the idea that the content of recreation activities or media consumed by children should be instructive and moralizing to prevent children from become 'bad'.

I even have sympathy for this to a degree when I think of kids watching things like Ichi the Killer or Caligula. The distinction though is that it's a child's parent's duty to determine if media and activities are appropriate, not the media or activities'. Miike movies are not marketed or aimed at children so if kids are watching them that's not Miike's fault.

Likewise with D&D in the 80's I remember hearing that it was bad because it encouraged kids to fantasize about massacre, diabolism and plunder. TSR responded by toning down its offerings, focusing on rewards for good behavior and heroism, creating heroic railroads (err storylines) and generally trying to make a game mostly about imagination into a game mostly about rolling dice. The idea was that if D&D prevented imagining immoral scenarios or if the game world was punitively moralistic it would teach good rather then allow the player to decide between nobility, murderhoboism and evil. I think that's the idea at least.

Fun article, cute rocket cats, and some lovely phrases in it. I also like the story about the bird incendiaries in the comments

During the Second World War the Soviet Union used Bomb-Dogs (like Rocket-Cats but leg-propelled) against German tanks but it was a monstrous fuck-up as dogs aren't very good at field recognition of armour, and tend to prefer the cover of trenches full of Russians to battlefields with bits of lead flying around.

Every child's story and every entertainment product is a form of propaganda. We shape our communications whether they are games or art or other things to have meaning.

We used to have way better propaganda. I blame Sesame Street and Captain Planet.

Parents should teach their children to despise all intended messages and rip things up and make their own.
If they don't do that and the kids don't learn: they're fucked no matter what messages they take away, for they are doomed sheep forever.

Oh wait, just realized last time you got asked a question on this blog you refused to answer. You're banned, Scott Anderson--no more comments for you.

The desire, by some, to control the content of RPGs is not limited to a desire to protect children. The category of people whom they wish to 'protect' is much larger than simply people below the age of 18.

Um... What? I think I missed the question. I apologize for breaking the rules.

Well if you go back and look at the last time you commented--which was on the technocrat post--you can see it. Maybe you have an answer now

And you have a point about messages. One of things that bothers me is that many, many people accept messages in entertainment uncritically.

My kids are 9 and 11. We watch all the crappy Disney tween shows and the rest, but we 1) watch together and 2) deconstruct the messages in the shows and commercials together.

Where/when did I miss a chance to reply to someone? Is that a rule? I wasn't aware of it.

I was HOPING that the title was going to refer to something that happened in a game. It was not.

I think Zak assumes that when people start a conversation by making points and asking questions, and then stop having that conversation by not responding and not answering questions and not making new points when the other person starts engaging, that the original person doesn't _really_ want to have a conversation but is more interested in doing something else less helpful or interesting (whatever that is, trolling or talking to themselves or I don't know), and so there's no point in talking to them at all.

There's no chance you missed and there's no rule about this, just continue that first conversation you started.