…and I like much of what is distinctly RPGish in them.

I like that RPGs attract introverts but punish the boring ones.

I like that RPGs create kinds of stories you don't really find in older things like books or movies or TV shows.

I like that RPGs upset peoples' assumptions about what's supposed to happen to heroes.

I like that RPGs undermine peoples' assumptions about how stories are supposed to work.

I like how RPGs force people to cooperate to have fun.

I like that RPGs reveal peoples' character and preconceptions--and that they can force people into dialogue about them.

I like that learning the rules better than the next player can't make you better at playing than them.

I like that RPGs force you to fill in blanks and if you aren't creative enough you fail and suffer and have a bad time.

I like that the writing in RPGs doesn't read like a textbook or a pop fantasy novel.

I like that there is great charm in RPGs and that sometimes it isn't on purpose.

I like that the art in RPGs doesn't have to look like Disney art or a comic book or a production drawing.

I like that so much of what I use at the table was made by hand.

I like that so much of what I use at the table was free.

I like that RPGs can scare off people uncomfortable with sex or the devil.

I like that RPGs force you to think of solutions that can't be found in the rules.

I like that using an RPG ruleset forces you to think about how the world works.

I like that RPGs require people to find people they trust and like and can communicate with.

I like that RPGs frustrate the immature and the hypocritical.

I like that RPGs are unpredictable and you don't know what the theme or tone or focus of a session will be.

I like that RPGs allow people who will never draw or write or sculpt or graphic design for a living a chance to draw and write and sculpt and graphic design things and by doing that make other people happy.

I like that neither you nor your character can get better than everyone else at the game without actually sitting and playing with other people.

I like that in order to play the character you want you have to be pro-active and do things in the game.

I like that players trying to fulfill power fantasies so often can't and get mad and cry about it and hopefully stop.

I like that you have to learn to play the cards you're dealt.

I like that sometimes other people get dealt way better cards.

...and I like how many of these (still) aggressively cutting-edge things were present or at least possible in RPGs on day one.

I think it's dumb when people who have ideas about progress in RPGs start by walking back from the most progressive and new things about them as an experience and as a medium. 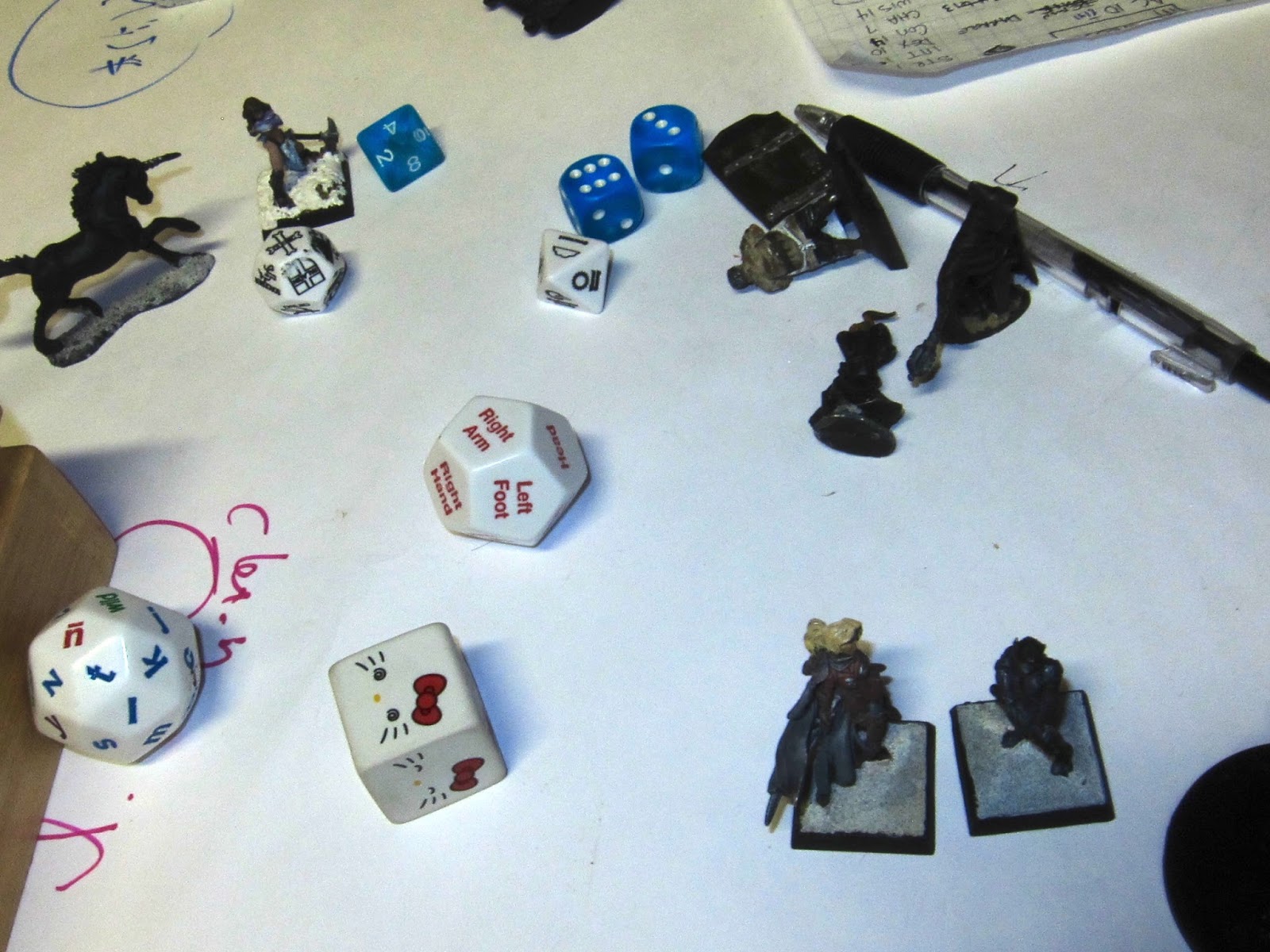 I like that the funnest and most memorable sessions I've played are the ones where my character died a horrible mangled death... or came within a hairs breadth of such only to be saved by the group effort of his teammates pulling out ever resource at their disposal.

I like this post. But it holds true only for roleplaying games, not cooperative story writing narrativist games, because there the game is skewed to avoid frustrating gamers on an ego trip and deliver a story replicating those in the books and movies. No upset assumptions in there, and you are made a hero by the rules.

For every line in this, there is an RPG that doesn't do that.

Whether you want to call those more conservative RPGs "RPGs" or not doesn't matter and isn't worth discussing.

Holy catmonkeys, yes I will yes I said yes.

Dude, you made my day. I´m totally "amen" on this, but I specially like this one:

I was the GM the other day for my 5 year old cousin, in a quick exercise of role playing and dungeon crawling... he wrote his character´s name and skills, draw his face, shield, sword, we draw together a map of the kingdom, he had to make difficult choices about what to carry in his backpack, he had a lot of maths with all the dice rolling, he learnt a lot of things about history and legends...

He was doing everything he does for his homework, but hell, it was fun, it was SO FUN now everytime he comes to my place he wants to play that "imagination game", and his parents were like... "How did you make him be so quiet all the afternoon drawing stuff and reading?" you know, he´s a fuckin tornado of a kid :)

@Carisma18: nice story! �� Usually, Kids have NO preconceptions, which is very cool. They like or dislike things. And when they discover/like something (rpg, star wars, heavy metal, marvel comics), they react like "WOOOW!!!!", something like that. ��

Exactly, everything is just new for them, and many times that "something new" its´going to be AMAZING. His face when he asked me where he could buy a flashlight and I told him "no batteries, no electricity, you should have a torch", oh my....

And RPGs are something unexpected, (that´s why there´s an explanation of how a classic rpg works on almost every book)...

When you have 15 years old you´re used to videogames, warhammer miniatures, table-top games... and then that older friend opens the book and tells you: "No, no... you play with your imagination, I tell you what happens in the story, and you can do anything you want..."

Its like "No shit man, this can´t be that cooll" :D