Goblins Are Bad And Mostly Hate You 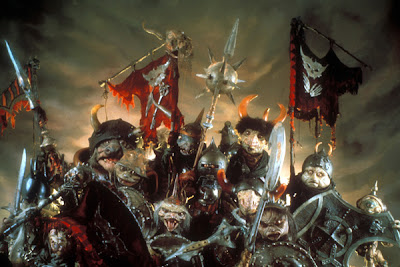 There are lots of different kinds. 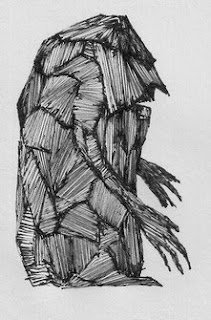 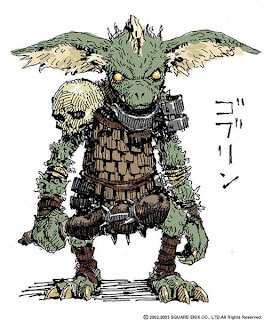 A man or woman incarnates a passion, a dwarf is a drive, an elf incarnates a taste, a halfling is a good idea, a goblin is a bad one.

At the center of every goblin is a single bad idea: fear, treachery, folly, murder in the rushes, bad manners or something else.

(That's why even the compassionate, helpful ones are always stupid or insane.)

Sometimes a bad idea is the only idea:

Why not catch a pig and fill it with gas so you can float? 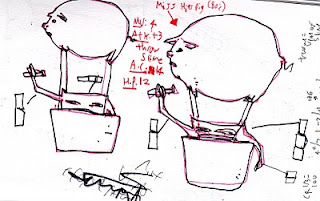 "This is a bad idea," a halfling would say.

"Do you have a better idea?" a goblin would say.

...and the halfling goes back to devising newer and more buttery cakes and the goblin sails over the mountain.

Humans (with elves) rule horses, and also have dominion over cows, large dogs and some kinds of hunting and game birds.

The distinction between these categories is merely linguistic: the elves of the north would say goblins claim dominion over the oldest and newest animals whereas humans--being possessed of less initiative and more perseverance--make do with the more reliable "animals of the middle hours".

Control over the ponderous, slick-skinned animals created in the early middle hour--toads, elephants, tortoises, rhinoceroses and, of course, hogs--is much disputed. 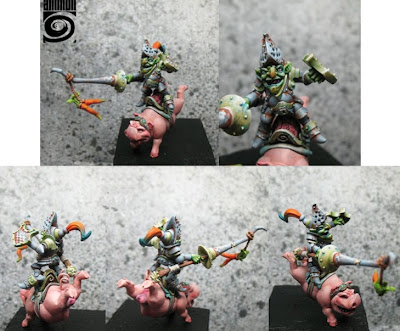 (Halflings mostly make do with animals already domesticated by humans (good idea!) though they have an affinity for animals that are "varmint but not vermin" such as mice, otters, badgers and other small mammals unsuited to productive industry. It is alleged that they have made a mutual secret pact with these creatures to avoid work (good idea!) but this has not been confirmed.

Elves refer to the creatures over which humankind and goblinkind contest (along with cows and the human dog breeds) as "netvorczek" or "lowing earth monsters" and the halfling's pets as "erzebet" or "brave but not noble" animals and distinguish them from "irze"--the foxes, peacocks, and other glamourous (in the literal sense) creatures more closely related to elves and fey.

Most animals, for some reason, seem to regard dwarves as merely another animal and nearly vice versa. A typical conversation might be:
"Hail goat"
"Hello dwarf". )

Goblins, like bad ideas, exist in every known environment--sand goblins and dune goblins are known to exist, as are ice goblins, frost goblins, and salt goblins.

They speak backwards in conversation with elves, humans, and all their kin to baffle them. Goblin scholar Barthing Deride claims High goblish is essentially just a complex and near-random system of triple and quadruple negatives purposefully designed by the teratocracy to frustrate diplomacy.

See for example this missive intercepted by Tom Middenmurk from a Gaxen Kane ambassador to the court of Nephildia:

The Half King's Cavaliers did not ride into the jaws of death to save the lives of our kinsmen. The Battle of Harrowdank Pass was not terrible beyond imagining nor shall the frozen gore of that place endure where the snowmelt never comes. Nor indeed do we build a  monument of Tiamat's thralls contorted in their death-spasms to remember the numberless slain.

The largest known goblin city is Gaxen Kane, which is disturbingly close to Vornheim (bad idea) and the River of Unfathomable Despair. To the south, it borders and extends intermittently into the radioactive Cobalt Reach, over whose new animals Goblin Kings have eagerly sought mastery for dozens of generations (bad idea!).

The city itself is hieronymogenous, dense and highly monstral. They worship the Great Grub and consider the carrion crawler its avatar.

Goblins of Gaxen Kane are the kind most often encountered in cities or dungeons in the north. Their empire encompasses a wide variety of specialized troops and tactics, including:

Black goblins who wear the skins of slain men. It is supposed to be a disguise (like the much more effective Trilloch) but really just looks fucked up. 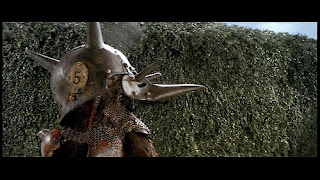 Cobbleds are named after the frequently patchwork state of their armor--they represent the lowest rank in the goblin army.


Dyads are conjoined twin goblin warriors, sometimes strapped into the center of giant spikey gyroscope-like spheres and rolled toward foes.

A meazel is the result of a kind of disease transmitted by a certain kind of goblin, it turns one of your fingers into a demonic biting monster.

Othuaggs are like those long-nosed Guinea Babboons but goblins take them and dye them and drug them and make their hair all crazy colors and spike them up like John Blanche's Brat Gang pics from the original Confrontation 40k game and send them to kill you.

Red goblins are painted with runes which release a 1st level spell as they die.

Terithrans are another goblin weapon of war: weak, cursed goblins shoved or thrown across battlefields by their fellows whose touch causes specific terrible effects (cause light wounds, etc.)

Trillloch are a goblin espionage tool. They take the form of a human woman who urges her husband to kill political rivals and their wives. The trilloch then eats the dead wife and changes to look like the dead wife, then urges the wife to kill various rivals, on and on forever etc.

The white goblins (who hate to go outside) walk on the ceiling.

Xvarts are to goblins what dwarven trollslayers are to WFRP dwarves. Fanatical, dyed maniacs. They ride wild boars. 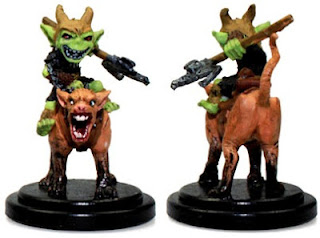 There are two known types of uncivilized goblins: Witchwood Goblins and The Tribes. 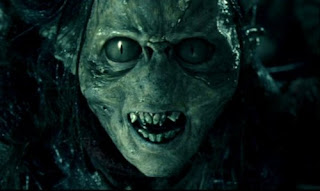 Witchwood Goblins are creepy and awful and speak in unison whenever they can. They trick lone travelers, poison eggs and hide gold in snails' gullets. Their fey blood is strong and they scorn the military airs, armor and alchemies of their empire-building kin, relying on innate magic and kitchen knives. They have cousins in every nation and in the East witchwood goblins are called bakemono. 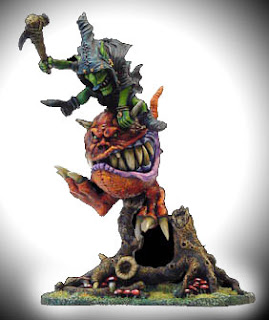 The Tribes are essentially just independent and less-organized versions of the Gaxen Kane goblins. However, while Gaxen Kane enslaves both trolls and ogres and shuns orcs and ettins, the tribes are often allied with- or dominated by- these more physically impressive creatures.

For example the decadent Hundred Needles tribe lives in an abandoned silver mine and is ruled by an ettin named Thraste. 25% are berserk Xvarts with 2hd more than the rest and +2 damage and carry 2-handed axes. They use mushroom men as shock troops and are skilled with crossbows.

Other tribes have names like the Purple Claw, the Slit Ear, Spitting Whore, Vomiting Sun, etc.

They can be generated like any other humanoid tribe. Many worship Tiamat, Akayle Ozph or other gods of chaos.

No one knows what a hobgoblin is. Reports conflict.
-
-
-

This is an awesome post, and man rider is genius and a hobgoblin is the half-arsed result of a hobbit and a goblin having sex, I thought everybody knew that.

can't take credit for Nilbogs, they're from the fiend folio

Thing monsters need more of in dnd - one off freaks not species. and lists of variants not separate stat blocks for every minor variant - nice to see your goblinoids encompass so many classic critters into kin

Brilliance, finally I can justify using goblins to myself. I did not understand why you liked them until now.

How do you come up with all this?
(That's half incredulity and half curiosity)
Thanks, I've always been a fan of goblins. Now I'll be revisiting my old Goblin City tables. More variety is always nice.

there is a way to make cake MOAR BUTTERY !? why U no tell meh sooner!? seriously though, reading your perspective makes my GMing possible.

I've never got the "Why goblins?" thing. I mean, surely you just have to read a few fairy stories or watch Labyrinth and then it's like "Uh, okay, cool!"

All you really need to do is say the word out loud.
gob. linn.

Yeah now I get it, but imagine growing up in a type 3 world where all the goblins are green and 1 HD and have maybe a couple shticks, plus lord of the rings goblins which are sort of indistinct . . . given those options and the limitations of time, it's pretty easy to prefer to imagine your friends slaying hyena-men and Frazetta witches.

But now I want to imagine my friends tip over a palanquin borne by eighteen goblins riding atop a six-horned rhinoceros upon which sits the six-horned goblin king, amid a throng of shrieking painted goblins. Etc.