Every role-playing game is different and requires sort of adapting to its own peculiar mindset in order to run it properly or really fully explore the distinct imaginative space it opens up.

But, really, who the fuck has time for that? It's all one fucking game and if it doesn't run like D&D then why in god's name would you even play it?

I really like the way Night's Black Agents' skill system forces you to think about and talk about spy stuff--it reinforces the themes of the game as the creepy pseuds say--and I like that character generation spits out a PC as detailed as a Call of Cthulhu one but way faster (at least after a little digging).

Other than rolling standard d6-for-each-side initiative, not using any of the special rules/cherries, and just doing rulings-not-rules for combat stuff, here's the bulk of it: 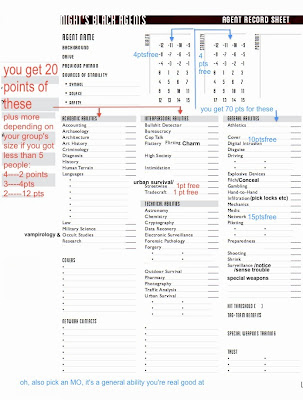 Mashing together Vampirology and Occult is specific to my game--it's light on vampires so far.

Streetwise and Urban Survival are one thing. Like: Streetwise is talking to junkies and urban survival is talking to the homeless and well what if you are talking to a homeless junkie? And which skill do you need to tell the difference? Fuck it: one skill. Anything too technical or Straight World to be "Streetwise" is covered by Criminology anyway.

Infiltration and Weapons have just been clarified on the character sheet so I can hand it to total newbs and they can get what those words mean in the context of NBA.

A quick flashback to smuggling marshmallows and a pack of roasting skewers past the Hollywood Blvd bouncers last thursday reminds me that you'll be piss poor at Filch if you can't Conceal and vice versa. They are two distinct skills but they're likely possessed by the same people and there are too many edge cases for me to bother with.

Notice is telling if there's a guy or a gun, Surveillance is telling if there's a guy following you or if a guy has a gun when you looked at him, Sense Trouble is telling if there's a guy following you and he has a gun. We call all that "perception" in D&D and it's one roll. They're likely three things because the game wants you to say "surveillance" a lot (of which I approve) and because Sherlock Holmes has Notice but isn't sitting in a white van all day ordering cheeseburgers and trying to stay awake and because of some errant vestigial GUMSHOEish idea in the game's DNA about characters spotting clues having to be some kind of different kind of skill where things aren't left to chance but whatever. I'm no spy but if you can't Notice shit I bet you kinda suck at Surveillance.

Electronic surveillance, being by definition a technical thing requiring familiarity with specific devices with brand names, can stay its own skill.

NBA fans will notice I took a huge wrecking ball to the social skills--Flirting, Flattery, Interrogation, Negotiation, and Intimidation are, yes, all different things but frankly trying to parse apart which thing someone is doing in the middle of a functional moment of role-playing without having to constantly have either the GM or player or both constantly referring back to the skill list is a pain (interrogation, for instance, includes "Put someone on the defensive during an ordinary conversation"). So I basically grouped it into Flirting/Flattery/Charm ("carrot" social skills) and Intimidate ("stick" social skills). As for interrogate: I've never noticed gamers particularly needing much character sheet help thinking up functional interrogation methods....
-
-
-

I really appreciate the redesigned character sheet.
I strongly hope that the following is on-topic:
I was watching "Criminal Minds" and there was a seminal moment where Mandy Patinkin realizes that they have been chasing the wrong guy, and that the baddie "is highly organized and has been employing counter-surveillance (knowing where the agents are looking) and counter-forensics (leaving cigarette butts filched from a different criminal)" ... until it had been countered, I guess I just took surveillance and forensics for granted, as a static procedure, and so did the agents in the episode.