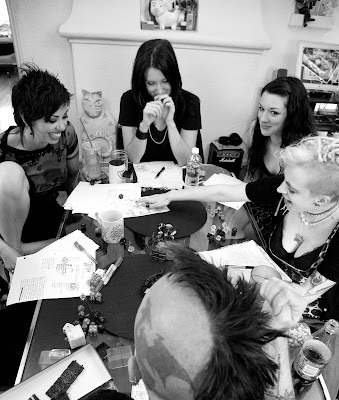 Hi to anybody who followed a link somebody posted from this Reddit thread whose traffic I now realize has been screwing up my blog. How are you?

Up there are some girls, left to right: Satine Phoenix, Kimberly Kane, Stoya, and Mandy Morbid. The tattooed shape in the foreground is me, Zak, I'm a boy. We're people who met "performing" in the adult film industry who like to play D&D. We live in LA, except Stoya, who lives on the East Coast these days.

If you want to hear more about the players (the girls) hit the tag over on the right there that says "players".

If you want to read about just random D&D stuff, then, well, here's our blog. It will probably be pretty boring unless you're really into D&D.

If you want to watch us play we had a show for a while called "I Hit It With My Axe" which was a documentary thing a video game website made of us playing. The good ones start around episode 5. There's one.

We were just in Maxim, so that's a thing.

If you just want to look at the screen and kind of be amazed that girls play D&D, then ok.

I was reading this blog before it was mainstream.

Your aplomb continues to astound me.

In other news, women are writing science-fiction!

Ha ha ha. Great post Zak. This is always the problem with having a good blog, eventually Reddit finds something on it interesting and kicks the crap out of it.

Consider it a test of your server or something.

I miss the episodes of I Hit it with My Axe :(

I see you use those flexible walls, are them good?

good enough--despite being called "bendy walls" they're not actually flexible--they're a series of linked hard plastic sections. They do their job and stand up on their own.

The pic is quite charming!

Did Frankie not make it into that shot? There's a character sheet to Satine's right with no visible owner.

Trivial, yeah, but I'd be wondering all day if I didn't ask.

I think Frankie moved to the east coast and is no longer part of the current group. An unfortunate but frequent occurrence in gaming circles... friends move.

Agreed, a very good B/W shot of the table, you should use it as an opener for the website.

Neat video. But I am not impressed, I too have gamed with girls. :p One of which I was even dating at the time.

I am guessing the party is pretty far down on the level scale at this point since they are bitching about the ever popular low level bob.

Also too bad that snow leopards are endangered in your D&D world too. Probably due to Adventurers eating them would be my guess, you know high level Adventurers that is.

First time I have heard Gnoll pronounced with a short "o", most of the folks I game with pronounce it with a silent "g" and long "o".

And last of all, I love the summoning chart, though the summoning of a musical instrument was entertaining. Now to see if I can find more episodes.

Craig, Zak is dating at least one of them. ;) You should be impressed.

I HIT IT WITH MY AXE was awesome.

Khouni, yeah, I know he is. It is not my first time here after all. The only thing impressive about it is the *number* of women present and playing. Actually it is kind of neat to see, but still not exactly impressed by chicks rolling dice. Been there, did that.

The vids are pretty amusing, reminds me of my group a lot, though more dudes and nowhere as pretty, but the shit talking level is about the same. I especially love the "No, we got to go now, otherwise he'll have a plan for us after lunch." That shit was priceless. I also enjoy that they have at least one person who likes to get info and talk before the killing commences, even if she gets out voted in favor of running off and killing shit.

Nice welcome message Ill just link this to people for now on. :D

This web page at blog.kanearmy.com has been reported as an attack page and has been blocked based on your security preferences."

I have to admit to being deeply envious of being able to game with a woman or women i could flirt with, and who perhaps i could include a sexual element in gaming.

That's not something i feel comfortable with in games with guys as I'm straight, and the only women I've gamed with have been in monogamous relationships already, or otherwise incompatible.