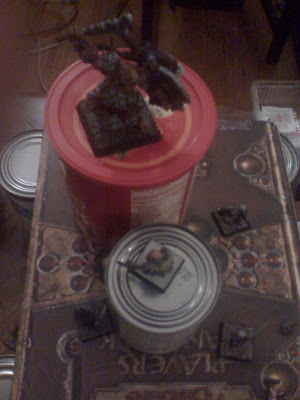 So I wrote a scenario (a set of linked potential scenarios, really--you couldn't do it any other way and still fit it in the sandbox) using every idea y'all gave me.

During the actual session we got through 17 of the ideas suggested (though, to be fair several people suggested overlapping things involving dogs or kids), leaving 23 waiting beneath the sand in one or other corner of the map.

Mandy fell victim to an Adam-Thornton-inspired magnet trap in the Flesh-Shadow bordello, though she survived on account of her being Yuan-Ti and Caroline Pierce taking off all her clothes before climbing down to get her.

After being set upon by evil children (courtesy a few people) wearing unheard-of-in-Vornheim-mystery-color pink (thanks to Erin Palette) Connie decided to take a balloon ride with cameraguy Darren over an ocean of mystery goo created in the mid-battle flood suggested by James Smith and caused by James Raggi's much-agonized-over moral-dilemma disintegrating scrollkid (I made her a Yuan-Ti with readable snakebook scaleskin, just to twist the knife a little more).

Over the open water, after spying an enigmatic sea structure topped by a floating pig (of whose true nature Infamous Jum knows more than my players) and surrounded by a cloud of flying somethings (nods to Matt and Jarrah), Darren lowered Connie ropewise down to the deck of a ship where slept Chris Weller's unusual ettin which she, being Connie, decided to wake up for no discernible reason.

Thus began a long and lamentable battle wherein Connie got royally fucked up and Darren ended up trying to use her dangling and flaming body as a sort of giant match to set the deck of the ship on fire which only ended in non-disaster on account of Darren managing to roll a 20 (only possible successful roll) to summon the will to slice his own leg open after it got fused to the balloon basket and then equally screwing the gods of probability on a charisma check to be all "Ah, well-fought old boy, let's end this and have a drink!" with the ettin and joining him in a well-earned tankard on the deck of the now-decimated ship. Without medication, Connie may yet die.

In other news: the dogs have begun to behave strangely--biting people, who then giggle, and Mandy and Caroline found a glass sphere with an aurotropic fish inside.

Love it. Your sessions are always full of delicious weirdness.

That was totally wicked!

Please let me know what you did with the Ettin, even if you just say what abilities it had. I'd written up an article about it but decided not to burden you with what I'd done in order to see what you did.

So far so weird. Can't wait to hear how the other 23 oddities fit in (my own included)!

I have been the cause of Caroline Pierce taking her clothes off.

I can die a happy man now.

That sounds epically random. Just as I suspect you wanted it to be!

Exept, here I know it was in most part randomly generated.