J Monsters Attest To The Power of Language 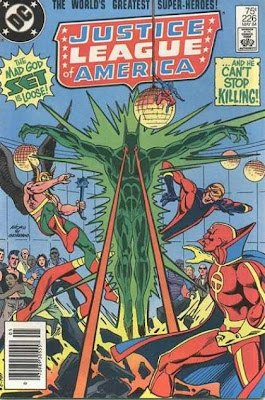 All the monsters: "J" edition. Some days this project is pretty easy...

Set's head is actually not a jackal's head but a mysterious thing known as "the Set animal" which is apparently not exactly a jackal.

"Jackal" is a wonderful word. Really that word is amazing PR for an animal that doesn't look like much compared to, say, an African wild dog. "Don't listen to those jackals"--it suggests the grinning malice of the hyena but somehow much smarter--and it suggests all the things a dog does, but without the loyalty. A cur. But scheming. A scheming cur. Try saying "faithful jackal". Doesn't work.

I imagine the jackal headed men in my campaign as being more sophisticated than the bone gnawing Jackalwere in the Monster Manual. But no more human--or humane.

A jaguar's preferred form of attack is a bite to the head, oddly the Monster Manual doesn't mention this, and leaves the "extra attack if the two forepaws both hit" to the leopard.

The Chill role playing game has werejaguars--again we deal with power of words. Why is it that "werejaguar" sound like a fantasmagoric brutal jungle dream creature and yet "wereleopard" just sounds awkward?

Native Brazilian folklore has the kanaíma, cannibals reincarnated as werejaguars. If that's not your "fantasmagoric brutal jungle dream creature" I don't know what is.

I associate Jackals with: a lumberjack, baby.

Why is it that "werejaguar" sound like a fantasmagoric brutal jungle dream creature and yet "wereleopard" just sounds awkward?

Maybe because leopard is already a portmanteau word: leo (lion) + pard (possibly the bestiary-writer's take on the cheetah).

But then the sound of the word jaguar - whether in the British (ja-gu-AR) or the American (jag-WUAR) form - is just inherently cooler than "le-PARD", which sounds disgustingly French to my ears...

@chris
I started going down a similar path, but I actually like the word "leopard".

I think that "werejaguar" works (british or american) involves a nice reptition-with-variation on the "wear/war" sound.

The Set animal is thought by some to be a mormyrid, an ancient fish that senses and communicates primarily with electrical fields.

Jackalwere are to Gnolls what Elves are to Humans, I think.

I had no idea Set was a Set animal and not a jackal. Thanks for the cool little revelation.

I like wereleopards. Whenever I think of them, the pregnant Zakoran queen wrestling and killing a black swamp leopard in Tanith Lee's The Storm Lord is just a footfall away.

I totally get the fantasmagoric brutal jungle dream creature but don't find the leopard a come-down. I'm from Australia though. Maybe the linguistic resonance isn't so much phonetic as geospatial/cultural, ie the werejaguar looms larger in the Mesoamaerican psychic landscape.