A new cult has arisen, worshipping death by plague and its locus is somewhere in the hinterlands, centered around a bizarre structure. Whether the plague pyramid is the result of a mad necromancer’s experiments with the mcguffin or whether the magic inside simply a response from a traumatized plague-ridden land itself is unclear. Either way, thousands of refugees have abandoned the cities and staggered mesmerized toward the infested pyramid, where a Plague Jester urges them on to the most debased and degrading acts.

5 bucks, details in The Store. 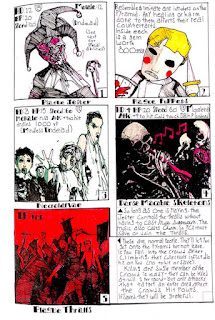 your art reminds me of michael Kirkbride's super weird art for that old morrowind game: https://elderscrolls.fandom.com/wiki/Indoril_Nerevar?file=Foul_Murder.png

Is it an inspiration?

That's funny. Most of MK's work is writing, which is good. I just thought you'd find the art interesting.