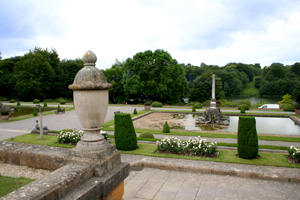 Cold open. Candle-lit night in an 18th century bedroom. A man (competent-looking, late 20s, early 30s) and a woman (striking, dark-haired—the same age or younger) in a magnificent canopy bed—the man shirtless and asleep, the woman next to him, awake, propped against the headboard, looking anxious. She reaches over him to an end-table and pours a glass of white wine.
She’s trembling as she brings it to her lips—drops fall on him, he opens his eyes and looks up to see her drinking.
“What’s the matter?” he says.
“I’m scared,” she says, drinking.
“The duel?”
“Yes.”
We see he tries hard to connect here: “It will be fine”.

Cut to the morning. Period music plays over a semi-familiar scene of wealthy 18th century people getting dressed, he in one room, she (with servants) in another. Powder, make-up, wigs, layers, corset, petticoat, etc. Her outfit is impossibly beautiful but not quite of the period—a hint of Alexander McQueen or Gaultier in the mesh of the lace, his is crisp but practical with a long coat like a British officer. He takes a fine long weapon like a straight saber (again, slightly off-period) from a wall of swords.

Cut to an exterior shot in the country the two of them in their fine clothes, on a pair of horses, accompanied by a party of servants and family members riding together. The music still playing.
Cut to another similar party, similarly dressed but in a different palette, also lead by a man and a woman coming from the opposite direction.

While the music still plays, the two parties converge on an impressive public building—a great hall of some kind. The two parties occupy opposite sides of the hall. A middle-aged man steps forward, stands on a broad space of empty, polished tile between them and says something we can’t quite hear over the music, gesturing toward both sides. The man from the first scene and his rival walk toward the center of the room with their swords, they bow and then turn and stand back-to-back with the swords held upright.

Then, still facing away, they hold their swords out horizontally toward their respective parties. The striking woman and her opposite number walk forward in their heels and take the offered swords. The men walk away to the margins, the two armed women curtsey, the music stops, and then the women begin the most brutal duel modern camerawork can record.

The fight is not superheroic or acrobatic—there’s grunting and sweat and blood. Two well-trained people, in heels on marble, trying very earnestly to murder each other. They slide and dodge, massive hairstyles tumble, dresses rip, stiletto heels kick at hamstrings and eventually our striking woman stabs her opponent through the chest.

She backs away and hands the competent-looking man the sword as the opposite party rushes toward-, and lifts-, the dead woman’s body and glares at them.
“Do you think it will hold?” the man says, cleaning the sword.
“No, but she is dead” she replies.
“May I inquire as to the origin of the conflict?”
“No you may not, Atlee. Prepare the horses,” it becomes obvious at this point by her manner that he is her servant.

Cut to an exterior and they are riding back through the countryside with their party, somewhat faster than before. After a few beats, Atlee says quietly “We’re being followed”. The woman tells the party to disperse and they all ride off in different directions. Atlee and the woman ride fast through the forest, noticing shadows on horseback at the edge of their vision.

Eventually they come to the base of a grassy hill with a lone rider silhouetted at the top. The woman aims a crossbow up the hill and shouts “State your business”.

The rider raises his arms, holding something. After a bit he throws it and it begins to roll down the hill. As it nears the bottom we see it’s a leather cylinder a little larger than a Pringles can—the woman, still holding the crossbow, gestures with a nod to Atlee, who dismounts, picks up the case, opens it and then unrolls and examines a piece of parchment.
She glances down at Atlee “A warrant for my arrest?”
Atlee: “An offer of employment.”
The opening credits roll... 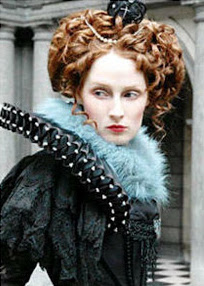 Pitch it with Oats studios.

If you are not working with DevDigs, Zak, you are missing out. They are talented and can collaborate with any size business, it seems. Imagine RPL delivered to a cave in the craggy hills of Pakistan.

It could usurp the all-popular, "Jousts and Jihadis".

I would love to watch your series.