Ok, this started as a jokey post because when I saw people were again complaining that Monte Cook put out a pricey game (200$ or something) I went on twitter, searched the name of the game--"invisible sun"--and tried to figure out who these people were who suddenly care so much, and did that... 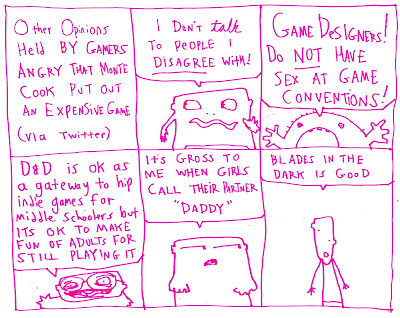 ...and that was going to be the whole blog post. That's chapter one.

Chapter two is I went back to work and I was listening to an episode of the Wait, What? comics podcast--they were talking about labor rights for comics creators.

There were repeated failed attempts to unionize comics in the '60s, the '70s and the '80s--they all failed for the same reason a lot of fun, creative industries fail to unionize--if you give your boss any shit, there are millions of other people dying to do your job for half the money.

The '90s in comics didn't have a big push to unionize--instead the superstar creators at Marvel (Todd McFarlane, Jim Lee, and, yes, the much-maligned Rob Liefeld among others) went and formed their own company.

Monte Cook Games was essentially an Image Comics-style move: Monte had gotten a reputation working in D&D, he'd taken a look at what companies were offering and was like "Nah, screw it, I'll form my own company". This is a fundamentally different track from the one trod by Indie gamers (and indie comics)--he made a name for himself with the majors and built that name up as a source of value before striking off on his own. A world where "Monte Cook" on the cover means as much to nearly as many people as "Shadowrun" is a world where the creator has as much power as the moneymen.

If you've only ever been a comics' fan, you're probably going "Lol Spawn" right now. If you know anything about being a creator, though, you know what Image meant in terms of changing the face of the industry. And that split in consciousness drives a lot of what goes on in games.

You can say what you want about Invisible Sun, but the fact is Monte Cook Games is charging what its charging because it's trying to get himself and his freelancing friends who were sick of the usual immense dick-around in RPGs paid while still putting out a product that does new things for those who get their hands on it. You don't have to see it as heroic, but you do have to give it credit as something that actually worked, in a field where 95% of solutions don't.

Monte solved the problem of giving a handful of creative people a non-nightmarish working situation while (unlike most indies and fellow D&D-grad Robin Laws at Pelgrane) still giving you the consumer a blue-sky game fully-supported in hardcover by graphic design, bits and bobs, and art by someone who doesn't eat paste. If Invisible Sun were the only game MCG made you might have reason to complain--but it isn't, it isn't even their most popular game, so you don't. Three or four Monte Cook games that you can afford sitting on a shelf next to one you can't is a small price to pay for the basically unprecedented situation of RPG freelancers not being treated like cattle that happen to be able to estimate probability curves.

From the point of view of capital vs creator, it's kind of amazing the degree to which the purse-string holders in the industry have succeeded in repeatedly rallying supposedly woke fans into taking their side in every controversy: when the Drama Club aren't complaining to a multimillion-dollar parent company that Mark Rein*Hagen's dynastic vampires are too important to be left in his hands, they're complaining to WOTC that the current edition needs to reflect their taste because the idea of a GM changing rules on their own is too frightening to contemplate, or arguing that the most exploitive wages in the industry are a price they're happy to pay as long as the owners make the right noises, or that the Open Game License was bad because fans being able to make content on top of a lingua franca system means they don't re-invent the system-wheel constantly and thereby drag themselves up by their own bootstraps. There's also the ridiculous refrain, when an uptight reader sees something that bothers their sensibilities "God, just having an editor could have solved this" blandly assuming (as no dissident has ever assumed) that the godlike and objective hand of technocracy would inevitably be on their side.

It's time to take a look at who the Drama Club system--whereby people with no track record of ever making anything including sense decide to have an emotional Take and then every single author in indieland from Dungeon World Guy to Slutshame Girl delivers a Take on that Take while their more anonymous friends snipe at the creators at the center of it--actually serves:

The only people ever served by Drama Club system are companies who do nothing but own the intellectual property--a world where fans view creators as replaceable children who need to be smacked into line in order to deliver the most risk-averse product available is exactly the one they want.

As left as they claim to be, the Drama Club's preferred mode of activism has nothing to say on the subject of creator-rights or fair pay for the people who pump out the stuff they love. Their complaints are far more about their fears and hopes about ways an entertainment ideas they've bought into--be that D&D or Rifts or the concept of roleplaying itself--can be weaponized to influence people to agree or disagree with them.

There's probably a good reason for this disconnect between creators and fan-agitators: They've had completely different experiences in life.

Drama Club fans have had their brains so completely renovated by RPGs that they've decided to spend their entire lives yelling at other people on social media about how they should be.

Creators that have made games that have had anmarked influence beyond their friend group, on the other hand, realize the hard limits on the ability of games to influence people in predictable ways. Even when they're sympathetic to fans' sense of ownership, pretty much no good creator is on the same wavelength as the Drama Club. There's no real communication between these camps--even the most successful storygame creators repeatedly admit they don't really have a back-and-forth with these kinds of activist-fans and just go "Ok, you've been Heard" and pat them on the head.

RPG freelancers will probably never unionize, and while solutions like Monte going solo or the profit-split deals LotFP and DIY RPG have made are a workable substitute, they rely on a very tenuous proposition: fans accepting that a creator has value in themselves, and in RPGs they're frankly loathe to do that. Fans write house rules, run games, and know what they think is cool: they think that gets them half of the way to being a game writer and they're not wrong. But until you finish that trip yourself you can't picture how many rations you'll need or how many random encounters there are along the way.

Monte Cook is one version of a sustainable future in a scene with almost none. Until you find another maybe don't be a pissy little twerp about it.
-
-
-

Good post! These bad faith arguments about Invisible Sun seem to ignore that enough people loved the idea at that price to make it successful.

I love the idea of big, beautiful physical RPG books and boxed sets, especially at a time where so many creators offer cheap PDFs as an alternative.

While I don't think the arguments about the price of Invisible Sun are smart or meaningful, the fact the game's popular or makes money doesn't really have anything to do with them.

They're not saying it's a bad game or unpopular (or when they do, that's not the problem) -- they're saying there's something morally wrong with it being expensive.

Doing a very cursory search on Invisible Sun it looks a lot like the same idea as some boardgames have to me.

High production values, kickstarted, lots of doodads, bit of a 'this is just not a product, it is a Proud Addition to your very own Collection' vibe.

It's interesting. That is basically a proven concept isn't it? People love stuff like that. Like... scythe, or I dunno, Kingdom Death Monster?

Like one of rpgs disadvantages compared to board games is the larger time investment required, but it doesn't feel like making it more expensive would be related to that.

But say, the other way people often try to earn money, publishing lots and lots and lots of supplements and expansions, do kind of figure into that. So this is kind of like an alternative.

It will be cool to see how it works out. It says it is sold out so it seems like it's going okay for this one at least.

You got asked a question and didn't answer so you're banned until you apologize and answer it.

I recently tooled up to run D&D Waterdeep: Dragon Heist (MM, DMG, PHB, Module). (Why I chose that game is complicated. But a lot has to do with my players being 9-year-olds who are not all my own offspring -- I need to keep it tame for the other parents and have nice pictures to fire the kids' imaginations while keeping my prep time manageable.) The list price for those books is $199.80. So the price of Invisible Sun is not even too far out of line. (And it sold out ... which any economist will tell you means the price was certainly not too high and very possibly too low.)

Boardgames went through a brief DIY garage-band phase with Cheapass Games and their philosophy of not jacking up the price by including common components like pawns and dice that anybody could reasonably be expected to have or substitute with pennies or whatever. It didn't work - not disastrously for Cheapass, they're still around, but boardgamers decided they'd rather have something that looks good and be willing to pay more for it; even Kill Doctor Lucky, the Cheapass crown jewel, has some nicer designs than print-and-play cardstock now.

Many companies do something similar to the Invisible Sun model specifically. Fantasy Flight has Twilight Imperium 4th, an eight-hour game most people will reasonably play only a handful of times, at 150 bucks, but they also sell dozens of more affordable games, so you're right to say the model is success.

Considering how much overlap there is between hobby boardgamers and RPG players (not total but a lot), I suspect there's no cognitive dissonance because boardgames are seen as being about The Thing, and it's fine for the Thing to have high production values and try to be beautiful, where RPGs are supposed to be about the Idea. MCG's unspoken crime here might be the development of an RPG as a Thing with its beautiful production and black cube and so forth.

MCG can charge whatever they want for whatever they want to make. No issue with that. It would be nice though, if they could handle their shit re other outstanding kickstarters and delayed products. Biting off more than you can chew doesn't benefit anyone.

Image will forever have my thanks and respect for
being the company that published The Maxx.

Sorry but if someone could answer this it’d be nice: who are Dungeon World Guy to Slutshame Girl?