Why Jews Never Forget Anything 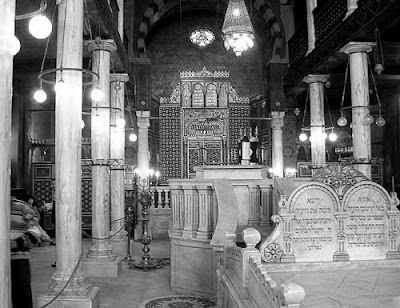 It is said that among the Jews there were once wizards who, after creeping from the beds of Christians, smeared fluids vital--still fresh from these fornications and interfaith adulteries--across the graven faces of their golems while whispering words from the Zohar, thus imparting movement and intellect to these stone mockeries of the will of the Creator. Speaking as a Jew I can tell you straight up: it’s all true. (Place campaign mcguffin here) has been with the Jews since before the age of the First Temple where it was once held within the sacred Kodesh haKodashim, and the witch’s notebooks found therein illuminated to only the holiest and most learned rabbis the true nature of reality. It is now housed on the lowest and most hidden level of the library beneath the Synagogue of the Levantines (or El-Geniza) in Fustat, Egypt. Few attend this ancient library, as those who would seek the most esoteric knowledge hidden there must contend with golems left by the kabbalists and baal shem of the distant past.

On the outside, the Synagogue of the Levantines appears to be an ordinary, though very large, synagogue, beneath are seven semi-public levels of the mundane library (one for each name of god), beneath this, the secret levels 8-24 (the number of abundance) hold the genizah (it is forbidden to discard any text with the name of god written on it, so this is a disorganized record of nearly every document produced by the temple and surrounding community since its founding) and beneath are the still-more secret levels (of which the current caretakers and rabbis may not even be aware) 25-35 (the number of wisdom)  possess the sorcerous texts. It is here that the (mcguffin)—and the golems protecting it—are found. A magic-user or cleric spending at least a week in this part of the library may gain a level and more new spells may be available at the Referee’s discretion. 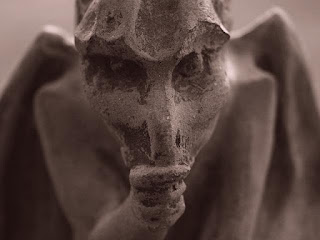 These golems resemble the gargoyles of medieval architecture, human-sized, save that each has a Hebrew name of god engraved on its forehead. Each can use a different spell associated with that name at will. Inside each golem’s mouth is a yad (a wandlike object with a carved hand at the tip used to turn the pages of the Torah) which, when the golem is destroyed, can be used to turn the pages of the texts that teach the spell associated with the golem (though these texts may be in any of a hundred languages). Without the appropriate yad the text is unreadable. There are dozens of each golem throughout the forgotten halls of the library. 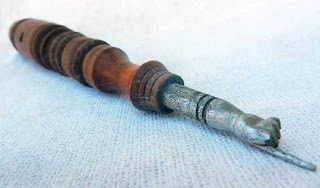 YHWH God's Eye (level 3 cleric)— Range: touch. Duration: d4 rounds+cleric level. The eye of the cleric's god falls upon the target. The target must strictly obey the tenets of the god's faith and holy teachings at all times or suffer d8+(cleric level) damage per round of disobedience.

El  Warmask (level 3 cleric or m-u)—Caster cuts the face from a slain foe (this takes 1 round and a successful Dex check). The face then will magically adhere to the face of the caster or a target and grant them the physical (str, con, max hp and combat and damage bonuses), mental (int, magic-user spells) or spiritual (wis, cleric spells) of the dead foe for one round per level of the caster. The target or caster must have slain the foe.

Eloah Divine Lacuna (level 2 cleric)—No save. Range: Touch. A single god chosen by the caster cannot see the target. The target cannot be directly helped, harmed, or in any way affected by any cleric spells cast by a devotee of that god's faith or otherwise relying on the power of that god.  Lasts a number of days equal to the cleric’s level.

Elohim Twist of Cain (level 3 cleric)—Range: 100’. No save. Target briefly sees an apparition of every being s/he has slain. The target is stunned until s/he makes a successful save. The save is made at a minus equal to the number of digits in the total tally of the target's kills.

Elohai Zealous Repetition (level 1 m-u)—Range: 20' On a failed will/save, the target must repeat that action every round (s/he may change targets) until s/he succeeds on a save.

El Shaddai Obsession Curse (level 2 m-u)—Range: Touch. Failed save means the target becomes obsessed with an object of the caster’s choice. The target must do things like make a will or spell save to get away from the object and otherwise avoid acting all Gollum about it in any other circumstances. The target is at -4 in combat if not touching the object on account of being distracted unless it is actively fighting to secure the object in which case it is at +4.

Tzevaot Total Empathy (level 4 cleric)—Range: 20 feet. No save. Two targets are chosen: a "donor" and a "receiver". The receiver becomes completely aware of the donors struggles in life on the most visceral level. The receiver knows the donor's most powerful desires and fears but will not consciously act to exacerbate the donor's situation. Unless the donor creature is suicidal, the receiver cannot harm the donor in any way. The receiver may, if s/he desires, make a will/spell save to stop the feeling once every 24 hours but the knowledge gained remains.

Degenerated Baal Shem Wizard-scholars who never escaped the library, now hideous: they crawl on bellies and have legs and tails like desert lizards. They are otherwise unarmed, unarmored magic-users or clerics of level 2d6.

Red Sunset Cobra—a species of spitting cobra, likes to hide in the stacks
HD 1 HP 4 Speed 90’ Armor 14 Morale 8 Attack Bite +2 to hit d4 (can spit up to 8’) and save vs Poison each round until a save is made, taking 1hp per failed save. If any saves are failed the affected body part will swell grotesquely and the character will take 4hp every morning until it is treated. 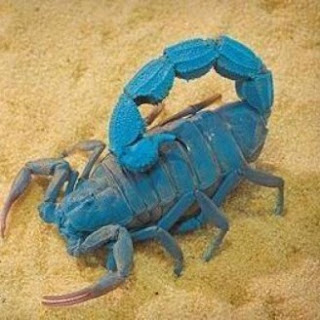 Connections: If the locals get the feeling the party are adventurers, they’ll tell them the legend of Zirzuuza (G12). Local Jews may ask you to take letters to relatives in Prague (D3). 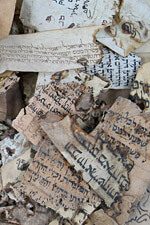 Found a cool article: https://www.theguardian.com/cities/2015/jan/21/death-in-the-city-what-happens-cemeteries-full-cost-dying I feel might be tangentially related to the general feel of some stuff on this blog.

It's about how cities kind of have limited space, which affects graveyards as much as anybody. So you literally run out of space to bury people.

Some graveyards apparently mitigate the issue by digging deeper:

Others try to buy up lots adjacent to the city. Or they reuse graves after a few years, moving the current residents to massgraves, or away to lots outside the city.

Also some want to let the private sector in and help out with selling graveyard lots. Apparently the former mayor of New York purched his grave five years before he died for a lot of money.

Imagine in an urban fantasy having to evict the animate dead from their graveyard because the more recently non animate dead really need the space.

Or an organized crime syndicate falling into infighting over which Boss gets the lot on the hill in the city centre with Aunt Heidi and the rest of the family. They all start wanting to commit violence, but noone really want to kill anyone else, because it might make the graves increase in price. And if the Bosses no longer can afford to die, they will be pissed. Hell maybe that is already the case, and they need to raise funds so they don't end up somewhere low class.

Or you need something from a grave, but instead of some quick and dirty looting with a shovel at night six feets down the thing you’re after is eleven stories down in the earth in the middle of the city. Or somewhere in a massgrave.

Or the player characters get stuck acting like house brokers but for graves.

Anyway I thought it was cool.

Jews never forget a loan is characteristic of Jew behavior over he last 1000 years.

I dig this a lot. Our (i.e. jewish) history and mythology/mysticism is full of super interesting and gameable bits, and it's cool to see some of this put into usable form this way. It would dovetail really nicely with a personal project I've been working on that looks to Ashkenazi/Yiddish folklore and history as reference for a low-magic setting based on the Pale of Settlement in the late 1800s - early 1900s.