Ru--the City of Fear + Chambers of the Dark Suffering

( I make a lot of things for my campaign which will never be for sale, because they're made out of online OSR resources. This one was constructed without moving from my couch with maps from Donjon (sorry Dave's Mapper, Donjon has room numbers) and stocked using only the Dungeon Dozen, Abulafia, Tarsos Theorem and this. Hyperlinks just go to the source generators.)

Ru the City of Fear

A Clever Philosopher Seeks The Ring of Night. Unfortunately, it is in the possession of his  mysterious former mistress. Whoever would acquire it must brave an abandoned city rumored to be home to scorpions, poisonous snakes, a sandman, and the Seeker of The Unshriven Light.

Random Encounters on the Way (roll every 2 hours traveling, every 10 mins in the city):

1-15 = That # of Maggotmen. Most of these maggotmen are emaciated and carry a club of some kind. They are ruled by the whisperings of a bizarre idol and go into battle with 1-2 gigantic monsters ( trolls, etc.). They are headquartered in a cathedral.
16-17 The Unfathomable Minstrels
18 The Overlord of Thirst
19-21 The Changeling of The Desert Waste
22-25 The Knightly Parliament of the Chalices
26-27 A dwarven sorcerer (-Lvl 6-)
28-29 A doctor
30 A female halfling barbarian (-Lvl 5-), ex-lover of an NPC known to the players
31-00 No encounter 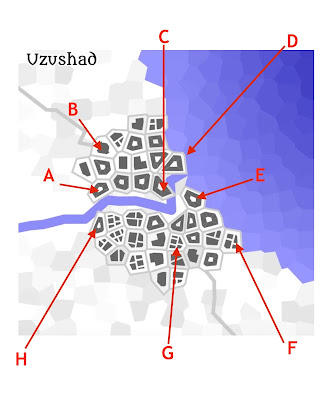 An ancient decaying seaside town, where fiendish mutant octopi dwell in the sewers, waiting to pull down anyone who walks too close to the storm drains

A lake of ammonia

A. Ancient army of a forgotten culture frozen in its tracks while on the march (trajectory points to ruined city)

C. Giant fire god dying of old age: immobilized by the ravages of eons, willing to whisper secrets to the reverent

D. Tundolu Two-heads: first head wears wizard hat, second head gagged and blindfolded, if blindfold removed issues bolts of reality-tearing energy that rapidly tunnel through to adjacent dimensions, if un-gagged hollers obscenity-laden revelations re: the true nature of the universe. You find this individual performing an autopsy on a dead eldritch horror. They are  annoying. They have the ability to selectively shrink or enlarge small parts of things. 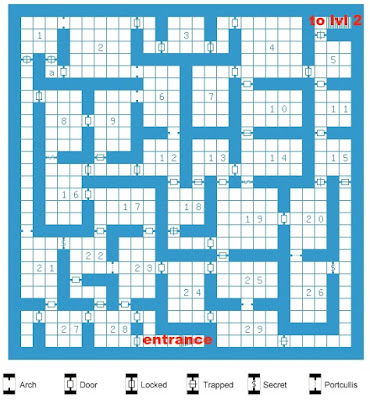 2. Rival party of adventurers hiding from you.

4. Ugos Cleaverhand, Bastard Son of the Axe God. You find this individual digging a hole in an innocuous location. They are laughing. They have the ability to bisect things into perfect halves by pointing at them. Once, long ago, they replaced their head with a constantly shifting puzzle-cube. They currently have a living tattoo that makes scintillating conversation.

-Caltrops, fecund: once placed, double in number every ten minutes for one hour.

7. Casks and kegs filled with ichors, blood, bile, and other assorted body fluids

10. Box full of recently forbidden books earmarked for burning but nobody's gotten around to it yet.

11. Evil hobbits hired to assassinate necromancer try to remain unseen while attempting to flee the dungeon.

16. Tall, imposing robed figures with impala heads, flaming eyes, practitioners of obscure magics but more than capable with signature glowing shamshirs, never condescend to actually speak to humans, communicate via nods, looks, posture and/or lengthy written correspondence, pursue their own inscrutable aims that at times run parallel to those of parties of dungeoneers

17.  Walls composed of stone with dimly luminous veins of an unknown compound

19. Subtle shifting causes doors to jam, must be smashed but doing so results in possibly injurious door jamb collapse

27. Door made entirely of doorknobs: must turn correct knobs in succession for entry

28. Trap glyphs on doors: Whosoever touches the glyph becomes a monster: mouth transmutes into that of great white shark, eyes become lifeless, like a doll's eyes, singular urge: bite everyone to death 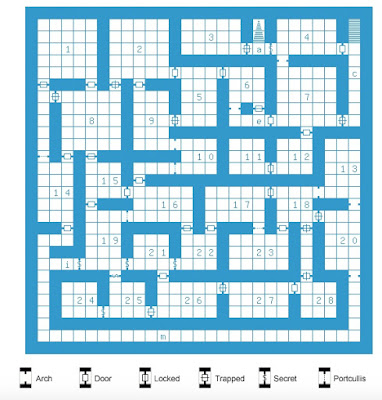 2. Three trolls eating each other﻿

4. This room is ON FIRE because salamander.﻿

5. Shield wall. This wall is made of shields.﻿

15. Shrine: Statue of a headless goblin.﻿

16. 4 champions of chaos, preparing for war﻿

19. Remains of a burned library﻿

27. Scattered remains of statue, put together is PC.﻿

I just checked out that Donjon site and i'm pretty sure I just permanently lost 1d4 hours from my life because I failed my save against awesome random coolness.

Where'd the city map come from?