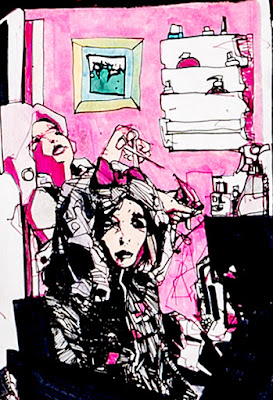 Many of the problems with show business are just problems with money—certain people have it and it insulates them from the consequences of doing bad things—but show business has another wrinkle: indispensible people. If the CEO of Audi turns out to be a cannibal tomorrow they’ll put another CEO in there and they can still make cars in the morning. If the woman playing the ice princess on your thing about the ice princess that fights the iguana zombies for the fate of the fantasy kingdom turns out to be a cannibal, well—can we at least not talk about it until the prequel is shot?

Movies are bad this way but popular tv shows, athletes and musicians are even worse—because they go on and on for so long. This is why these industries are rife with stories of high-profile performers who work together while hating each other to the bone: firing either of them is effectively firing everyone on the project. How do you get someone to do what you want if you can’t effectively threaten to let them go? Why do you always hear people saying this or that actor “demanded” this or that line be added or cut? Isn’t the director or producer supposed to be the boss? In effect, at a certain level of indispensibility, a star has no boss, only moods.

Handlers are a real thing: people hired, often secretly, to basically befriend an indispensible performer and get them to behave themselves by literally any means necessary. This often means keeping them away from drugs or alcohol, but it can just as often mean getting them drugs or alcohol—quickly, without making them leave their hotel room or stay up or out too late. A handler often has to walk the fine line between giving them enough of what they want that they’re in a good enough mood to perform and not giving them so much of it that they wake up a half-hour after their call time in a parking lot in Williamsburg without their wallet asking local kids for subway money to get to set.

These demands can extend well beyond mere substances, of course, literally any whim or human passion (or, in Demon City—inhuman passion) under the sun could take over a star and the rest of the crew just has to work around it. I know of one project where the (secret) handler’s job was to get the star to watch the film the production was parodying. The entire set becomes, in effect, a conspiracy to please their tiny god and cover up anything terrible they might do. They’ll try other solutions as well: sometimes it’s distracting the star with some new hobby, sometimes it’s trying to get them romantically involved (or keep them romantically involved) with someone who’s “good for them”. And while the star’s indispensible, the crew is not—so the only people with equal leverage are the other stars.

So there’s Mom, who’s played Lady MacBeth in fifty-seven different productions and, after three seasons, is ready to move on to something more challenging than That’s The Petersons!, there’s Dad, who’s begun collecting used bullets from around the world and whose skin is starting to dry out in a way the make-up people are starting to have trouble covering up, there’s the Daughter, who is in school for photography and sometimes follows Dad after shooting ends to see what he’s been doing because he’s so strange these days, and there’s the Son—who is working on his hip hop album and who had his jaw broken by Dad once in the alley behind 1 Oak. And there’s a whole backlot full of people trying to pretend this is normal.