A set-up for Demon City.. 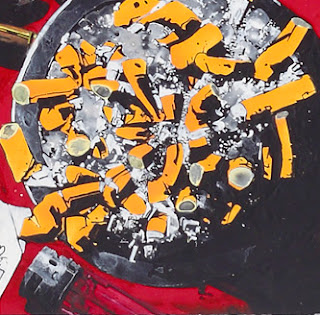 The Spaniard spoke: “I understand the parameters of your business: the cocaine is manufactured, the cocaine is taken surreptitiously to the United States, it is purchased in great quantities by men and occasionally women known to be of reliable character, these distributors then arrange for it to be sold through social connections or on the streets in defined territories to individuals eager for pleasures and experiences exceeding those which society has titrated out to them.

“At each stage the process demands that everything be hidden, that your agents are loyal, that the low remain ignorant of the mysteries above them, that police and government agents be ignorant or reliably corrupt, that rivals for control of the supply or of the territory where your product is distributed know fear. Violence occurs only when one of these requirements is not met.”

As politely as a man can do such a thing, Don Membreño encouraged the Spaniard—whom, until today, the Don knew only by reputation—to get to the point. Julio Elespe did so: “ My own business is quite similar on all of these levels. I require two things only: I require the products of this violence—the ruined bodies of those who died due to betrayal and to knowing more of your hidden world than they should, and—occasionally—I require the movement of certain texts from various places—for example The Mariano Moreno National Library of the Argentine Republic in Buenos Aires or certain homes in Bolivia—to Los Angeles. Some of these books will appear to be of no value, even to the original owners, some of them of them will be as dangerous to smuggle as any drug—you may use whatever methods you wish. Certain…promises and contracts…prevent me from moving south of the Equator.”

“I can address various difficulties in this country for you at a high level. For example this zealous Mayor in Miami causing trouble for your organization—his resolve, and the resolve of his prosecutor…they will falter. Before the end of the week. And, of course, should we come to an agreement, your men here who should have prevented me—or anyone—from entering your suite, they will awake.”

Don Membreño drank his scotch, considered the pale Spaniard’s offer, and listened uncomfortably to his men moaning in their sleep.