A moron, but likable. A small and pale puppy. A sheer drop.

The exact method will be described later, but it makes keeping track of large fights a little easier and each threat has special cards associated with it (A haunted house will have The Tower associated with it for instance) used throughout the adventure in which they appear, which help the creature when they are drawn and which have a special (different) benefit awarded to the PC if they defeat that horror.

Anyway this is a section on the meanings of specific cards outside the context of any specific horror.... 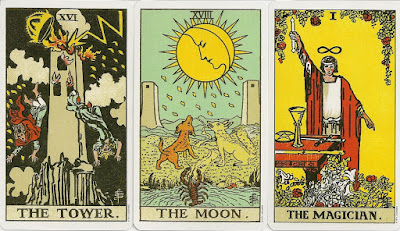 Interpreters of the tarot always tell you two things: (a) A clear and apparently historically-reified meaning attaches to each card and its placement in the interpretive matrix and it took me years to figure it out, but also (b) interpreting the cards is more art than science so hey whatever. These are what the cards mean in Demon City—which has its own uses for meaning.

There are many uses for the cards, including:

1. As the Host’s throws for NPCs, horrors, etc as well as rewards for PCs resulting defeating horrors (as described in the first section of the book).

2. To create fortunes or precognitive flashes (By showing a PC all the cards associated with the menace they are currently facing and, in some cases, telling them the significance of these cards.)

4. To randomly determine buildings or locations (Each card has at least one kind of location associated with it).

In the last two cases, you can pull multiple cards to describe something in more detail—The Hierophant and the 8 of Cups together would be
a retired priest or an abandoned church.

Additional numbers are provided in parenthesis so that, if necessary, card effects can be rolled up with dice—roll d100 and reroll anything too high.

(00) The Fool—A moron, but likable. A small and pale puppy. A sheer drop. A stranger will be kind to you, despite your mistakes.

(1) The Magician—A wizard or liar. A deceptive performance, before a large audience. Avoid a spell, or cast one unerringly.

(2) The High Priestess—A cagey and intuitive woman in a hat. A religious hospital. A nurse. A 12 to perceive unholy forces.

(3) The Empress—A blonde, imperious, dishy. Beauty. A bend in the river. Gain a point of Appeal if you roll a 10 exercising or drop a point of Cash on plastic surgery.

(4) The Emperor—A father, bearded. Entrenched authority. A public building in white marble.  Someone will assume you’re an authority figure.

(5) The Hierophant—A religious leader. A grey church. Traditions. A 15 to drive off unholy forces.

(6) The Lovers—An erotically charged relationship. Touching. A good place for hook-ups. A new Contact who finds you irresistible.

(8) Strength—Someone tough. A fierce animal. A place for athletes. A boxing gym. Gain (not just regain) a point of Toughness if you roll a 9 exercising.

(9) The Hermit—Isolation and the perspective that comes from isolation. A desolate place. A brutalist parking garage. Led Zeppelin IV. A 10 on a Perception check while alone.

(10) The Wheel of Fortune—A gamble or gambler. A casino, a track or a card game. The Host is about to leave a decision entirely up to luck, but it goes in your favor.

(11) Justice—Someone inclined to fairness. Possibly blind. A police station, a protest, a courtroom, a place where activists meet. An 11 to hit someone who has hurt a friend.

(12) The Hanged Man—Reversal. Inversion. A contrarian or iconoclast. Punished but not punished. A place of execution. A 12 to hit a captor.

(13) Death—Someone who is old and knows it, or something. A graveyard, an ICU, a home for dying people. Double damage on an already damaged foe. Won’t work on what’s already dead.

(14) Temperance—A moderate or teetotaler. A bad haircut. Wherever middle-aged couples relax. A vegan restaurant. Roll an extra time if detoxing and pick the best.

(15) The Devil—Undeniably wicked. Any place of enslavement, calculated iniquity or accumulated power. A 15 to hit an enemy, but your friend is hit, too.

(16) The Tower—One who overthrows. A building that is mazelike, high-security, or haunted. A 16 to successfully trespass.

(17) The Star—A celebrity of some kind. Someone or something uncanny, distant. A celebrated place. An alien place. Acquire renown for your work.

(18) The Moon—Someone given to passions. Dark or pale. Animals. Cause a rounds of panic in an enemy that is hurt or surprised.

(19) The Sun—Very young, but wise. Skin prematurely worn. Leathery. A rooftop in daylight. A greenhouse.  Illumination. A 19 to a Research check.

(20) Judgement—Someone on a panel, or a board, or any judge. A room where great decisions are made. Someone with power will agree to help you.

(22) Ace of Wands—A beginner, capable.  A redhead. A startup’s office. Work/train during downtime and gain a new skill on a 9.

(23) Two of Wands—Someone with concerns abroad. A waterfront or beach, rapidly developing. Add an extra die when executing a plan you made.

(24) Three of Wands—A brown-haired man. A room with blueprints.The Department of Regional Planning. Gain a point next time you add a new Knowledge-based skill.

(25) Four of Wands—A family member. Normality. A place unchanged for a very long time. Add a die and pick the highest when spending downtime with family.

(26) Five of Wands—An arguer, surrounded by chaos. A fighting ring or debate hall. Add a die in a multiparty melee.

(27) Six of Wands—Someone black-haired and proud. A parade or award ceremony. Regain a point of calm after a victory.

(28) Seven of Wands—A fugitive or desperate person.  A small business. A drug front. Gain a die when facing multiple opponents.

(29) Eight of Wands—Online a lot. A hydro-electric plant. Impersonal forces. Gain a die working with a machine.

(30) Nine of Wands—A disabled person. An exhaustive collection—archive, museum—nearly complete. Gain a die after awaking from an injury.

(31) Ten of Wands—A bureaucrat, working too hard. An overburdened business or agency. Add a die while talking to someone hard at work.

(32) Page of Wands—An apprentice or enthusiast. A grand opening. Add a die when dealing with any kind of supernatural for the first time.

(33) Knight of Wands—A genius in their field. A sentient spell. A place of unharnessed power. Gain a point of Occult. Occult: 1 if you don’t already have it.

(34) Queen of Wands—Voracious, and a total babe. A black cat. A disguised witch. An excellent restaurant. If you roll a 9 while reading, gain a point of Knowledge or Perception.

(35) King of Wands—Successful and admired. A lizard. A necromancer. A source of impeccable, if flamboyant, menswear. Uncover a work of occult knowledge.

(37) Two of Cups—Warm and reasonable. A mutual beneficial relationship. A kind woman’s home. Roll an extra die when spending Downtime with an ally.

(38) Three of Cups—Charismatic and not drunk yet. A friendly dive under a place where no-one eats. Succeed on an Appeal roll to meet a stranger.

(39) Four of Cups—Hungover and apathetic. Where people are sleeping off a party—or a bad clinic. Gain a die vs inebriation.

(40) Five of Cups—A gaunt soul, dark of aspect. A ruin or ruined place. Gain a die vs Calm loss at the sight of violence or death.

(41) Six of Cups—A natural victim, paying no attention. An unsuspecting and idyllic place. A carnival. Roll an extra Downtime die when with family or friends.

(42) Seven of Cups—Someone misshapen and delusional. A district of retail luxury. A theme park or retro diner. Succeed on a Deception roll.

(43) Eight of Cups—A retiree or once who has renounced the past. An abandoned place. An 18 to escape.

(45) Ten of Cups—Someone pleased to help. Generosity. A center of LGB or T life. Receive an unexpected gift.

(46) Page of Cups—A sentimental weirdo. A fondness for seafood. A pleasant wharf. 10 to locate a hidden animal.

(47) Knight of Cups—A romantic with full lips. A library without windows. A place of breaking glass. A 10 to seduce.

(48) Queen of Cups—A ginger woman with strange possessions. A psychic. An antique shop or prop house. A 10 to discover some rare object.

(49) King of Cups—A wise and wealthy man in elegant footwear. A houseboat or yacht. A 10 to persuade someone of your good intentions.

(50) Ace of Swords—A tattooed man. A decapitation strike. A busy corner in the center of the city. An 11 to a called shot.

(53) Four of Swords—A quiet thinker. A prepared assassin. A mausoleum. An extra die if attempting to work straight through downtime.

(54) Five of Swords—A gloating fiend. A thief and orchestrator of violence. A hub of iniquity. A 15 to commit an unjust act.

(55) Six of Swords—An exhausted traveler. A crossroads. A 15 to negotiate with hostile powers.

(56) Seven of Swords—A petty schemer. A spiteful failure. A business operated as a front. A 17 to steal from someone who likes you.

(57) Eight of Swords—The perfect victim. Kidnapped or compelled. A support group or center for the afflicted. An 18 to convince someone you are sinned against.

(58) Nine of Swords—An insomniac. Shopping from home. A guilty conscience. A bachelor pad with a hand-me-down quilt. A 9 to inflict a head wound.

(59) Ten of Swords—A soon-to-be-corpse—or a corpse. The murder card. The worst neighborhood. A 10 to afflict the already-afflicted.

(60) Page of Swords—Someone playing with fire. A gun shop with inadequate security. Learn a weapon skill when rolling a 9 to work during Downtime.

(61) Knight of Swords—Quite intentionally an absolute menace. A stabber. A themed pub. A 10 in a fight.

(64) Ace of Pentacles—Efficient and practical. A place with a strange door. A vacant lot. Establish a new business.

(65) Two of Pentacles—A juggler or a chancer. A playground or ball field. Reroll a failed Cash check.

(66) Three of Pentacles—A team player. A cathedral or place made of stone. A 13 to a group effort, devoid of violence.

(67) Four of Pentacles—An absurd miser. A roof with a fine view. Greed revealed as only greed. A 14 to grab someone or something.

(68) Five of Pentacles—A battered beggar. A terrible charity. Refusal. A 15 to a Calm check in the face of suffering.

(69) Six of Pentacles—A charity worker. A distributor of gifts. A Goodwill or Salvation Army. A 16 to persuade a skeptic of good intentions.

(70) Seven of Pentacles—Straightforward and hard working. A quality control officer. A growing business. A 17 to notice financial irregularities.

(71) Eight of Pentacles—One practiced in their craft. A place with a prominent public sign. An 18 to apply an Occupational skill.

(72) Nine of Pentacles—A prospering dork. A golden garden. A bird of prey. Leisure. Gain the trust of an ordinary animal.

(74) Page of Pentacles—A neophyte schemer. A university campus. Gain a point of Cash if you roll a 9 working through Downtime.

(75) Knight of Pentacles—A hustler. A summoned thing. A sketchy lawyer. A club with a dark reputation. Bribe someone successfully.

(76) Queen of Pentacles—A woman, rich and slow-moving. A sad stone monument. Regain a point of Calm lost to the supernatural.

(77) King of Pentacles—A man of ill-gotten wealth and dubious taste. An enormous mall. Move to a better apartment downtown.