Terrorize Them With Quality

And then I said: If the DIY RPG scene wants to, in less than 5 years it can run this town.

...when I got to my room was stand and go "One" and then slide over two feet and go "Two" and then slide around the bed and go "Three" and I kept dong that all over the room, trying to count how many people could fit in it.

Probably maybe enough kinda--if they were all thin and careful and managed to make it 4 whole blocks from the convention center and the staff didn't notice them crowding through the lobby.

I mean really to be clear I was worried sick. Also I'd just realized there was a very big hole in the seat of my jeans and likely had been for several hours.

And Green Ronin was up for more awards than us.

It's always good to make peace with the worst-case scenario. In this case: the party will suck, there'll be nothing to celebrate anyway, and we'll all be arrested for nudity and boners by the Indiana sex police.

...striding boldly in the sickening heat. Jez Gordon and James Edward Raggi IV, arrived from distant lands. We found a place, I ordered something with rum and pineapple and, basically, for five days straight....everything was completely perfect in the world.

The Bastille really does await, and the guards really are drunk: 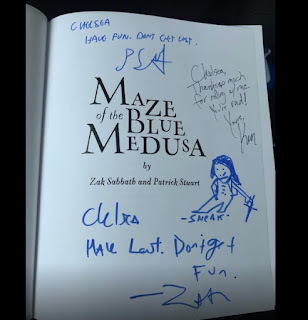 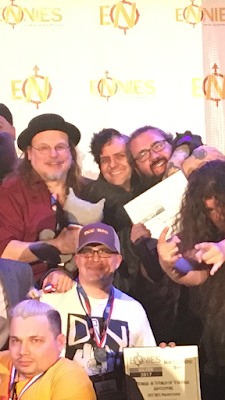 John Wick (the 7th Sea one not the gun one), me hugging Mark Diaz Truman
Mike Evans, Raggi
Mike Curry (7th Sea systems guy)
(Not pictured because they won nothing) the Green Ronin team

There's video of me yelling at the crowd and being interrupted by a guy in
a Captain America shirt who told us to party harder:
You can see Wick in the front at one point--his team came, half the Monte Cook crew came, the ABCs of Roleplaying crew came (who said they'd been inspired to do it by this project on the blog), Greg Stafford said he was going to bed, which means: we threw the biggest party.


So many people BYOB'd we had a fridgeworth of liquor left over. I gave Rein-Hagen a beer along with copies of Red & Pleasant and Death Frost Doom and gave the rest to anyone who looked thirsty, especially if they were running Dungeon Crawl Classics. (p.s. Whoever brought that really nice bottle of Silver Cross--Stokely has it.)

Meanwhile, online in fake-life the jackals were out in force harassing the OSR post Ennies:

I introduced Raggi to the Monte and the Monte Cook team at the airport, and James of course took the opportunity to start up some hip-hop-beef marketing.

Awesome! And congratulations, I've loved the stuff you put out this year. Missed this year but I'm already planning for 2018.

Very cool all round. "Terrorize them with quality" is my new mantra. \m/,

Well well it seems the peasants are uprising and taking over the kingdom come!

Sounds like it was a great time! I had a laugh at the literally trying to figure out how many people you could fit in the room (I've done that once or twice myself). Glad you all made out well, and everyone got home safe & sound.

Thrilled to have been a part of the GenCon shenanigans.

Who was the interview with?

gaming podcast called "Just One Fix" or something like that

we also did others. i'll let youknow when they remind me they did them

I missed the fucking party because I had an 8am game. Great group of guys! Thanks for all the books (and shirt). Next year I'll get the rest AND make the party!!!!! Congratulations on the ennies.

Many congratulations to all of you. Awesome photos, looks like it was a great time throughout.

It was a great awards show and better after party (until I bailed like Raggi and Patrick). I ran Blood in the chocolate for the other Goodman Games volunteers and wicked fun was had. Let's keep beating them at their own game.

It was great! I wish we'd had more time there, but it's a reason to go back next year.

Damn, that sounds like one Hell of a good time. :D

Missing that party was the low point for me but I felt like I'd been eaten by a wolf and shot over a cliff. Not wanting to be patient zero I crashed early.

Like I told Raagi,you are all performing a valuable service. You are providing a refreshing alternative to the staid corporate repetition being handed to us.

Like the art movements that came from artists wanting to do their own thing, to not follow some governmental guidelines saying what is acceptable. Sometimes boundaries need to be pushed. Just saying.

Fucking congrats!
I almost regret having been required at Necronomicon (which couldn't even get a decent controversy) but sent some friend of a friend in wolf furry garb to snag me a copy of Maze.

See you next year!

(Annoyed at my work proxy for blocking your blog)

Ha! Glad to see Stokely liked the Silver Cross I picked out! Ken Baumann actually asked me to pick out some nice whisky to donate to the party on his behalf, and he paid me for it once he hit the party, so he should get the credit for it!

As I said before, I really enjoyed the party, and am glad you all met with some success. If you decide to hold another party next year, feel free to reach out to me again a bit earlier and we'll find you some digs that won't freak out at the noise a good party seems to require. It was still a fun first for me getting booted from that room, though!

how will i find you, Godzilla?

Ah yes. My secret identity is John McCollum. Should have just reacted to you on Google +. You can find me there as you did before.

I must be honest, I have a vested interest doing any such OSR DIY party up right. Raggi has an adventure of mine in development, so maybe I will have a nomination of my own to celebrate some day.

I think one of my favorite mini-moments of the Con was seeing the skull-faced dude trying to discreetly talk on his phone, jaw clacking away.

And thanks for the sticker stress test! You and Stokely do yeoman's work.