Some more villains for Demon City... 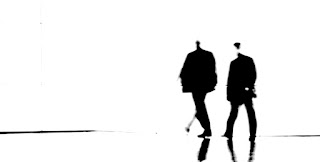 Smartly with oxblood briefcases and polished patent-black shoes that echo tennislike down well-lit halls, the communicants of the Poison Cabinet come, unidentified. In their overt lives, their character is international, professional, high-level, consulted. We have certain standards they say, and it’s true, standards articulated at the Reichsparteitag in 1935 and again at the opening of the Grosse Deutsche Kunstausstellung in 1937:


Art must be good; but beyond this it must be responsible, professional, popular and aggressive.

In the final rooms, while gouging your prying eyes out and spreading your family's stretched and skinless faces across the walls with high-carbon filleting knives, Cabinet ministers might concede their passion for the elimination of modernistic and Judaizing influence on world culture could strike some as petty at this late date, but they come by it honestly—being products of a highly efficient synthetic alphavirus developed in 1939 in the Spandau Citadel which floods the human prefrontal cortex with the conscious and unconsciously held value system of any one of 8 volunteering experts on the theory of Degenerate Art and loyal members of Committee for the Assessment of Inferior Artistic Products.

The core ideals of art historian and archaeologist Ulrich Dietrich (1902-1967) for example, are, as of May 2017, currently hosted in five separate nervous systems with 70-95% penetration—those of Belgian journalist Elise Verstraete, New England philanthropists Walsh Clark and Pipi DiAndrew, British parliamentarian Oliver Redpool and Austrian tire magnate and television personality Tobias Moritz. The carriers of these conscience-grafts have been seen, some days, in cocktail lounges gesturing as if wanting very badly to stare into their drinks, but trying not to.


It is not the function of art to wallow in dirt for dirt's sake, never its task to paint the state of decomposition.

When threatened with discovery, the Cabinet moves decisively, as the surgeon approaches the infected cyst, but as the members' are aware their moral vision will transcend a single human lifetime, they have adopted a subtlety not afforded in the frantic and slapdash years of the late Reich. In pursuit their long-term agenda, the patience of these idealists is near-geological. Well-known figures are imperceptibly sterilized, medical records altered in ways that only tell on targets’ health decades later, trends are suggested and encouraged by the targeted replacement of key personnel. Their inroads are quiet and disparate biographers of Franz Kafka die in unremarkable accidents, Japanese games go untranslated, comedy and horror never win Oscars and the estate of Diane Arbus is slowly drawn into legal disarray. The ministers seek an art, literature and film of clarity, heroism, strengthening myth, deep spirituality, simplicity, open spaces, simple realism and a popular culture that distracts and entertains without neurotic darkness, pathology, marginality, ambiguity, deformity, strangeness, sexuality, tortured invention, argument, irony, socialism, criticality, cynicism, experimentation and intellectualization.


Parallel to the training of the body a struggle against the poisoning of the soul must begin. Our whole public life today is like a hothouse for sexual ideas and simulations. Just look at the bill of fare served up in our movies, vaudeville and theaters, and you will hardly be able to deny that this is not the right kind of food, particularly for the youth. Theater, art, literature, cinema, press, posters, and window displays must be cleansed of all manifestations of our rotting world and placed in the service of a moral, political and cultural idea.

These changes to a brave new civilization are, they'd be the first to admit, just beginning—but a few lifetimes are a small price to pay for a ten-thousand year Reich, and all great enterprises begin somewhere.

Think in the long-term, they will say, with the rims of their glasses reflecting the fallow red thing they've made of what was--moments before--the last and screaming chapter of someone real to you. 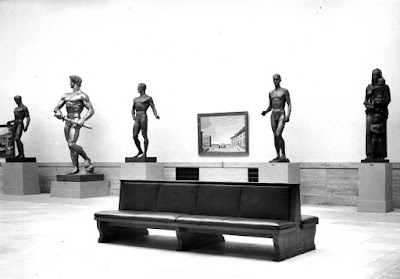 My 90-something year old aunt who lives halfway across the country once told me that when she and my uncle traveled the world they would come across Germans (in the right age range) who were ordered to live in the various countries by the 3rd Reich Government. "Hitler was planting seeds" I believe is what she said.

Is it wrong that I want an oxblood briefcase? :-D

This is looking very much like v2 of Over the Edge. Keep going.

This is fantastic. Is Ulrich Dietrich a reskinning of Max Simon Nordau?

No, Nordau was a pre-nazi Jewish theorist of degenerate art, Dietrich is meant to be just one of the many random Nazis who promoted that idea decades later during Hitler's regime