Adventure-Building and The Ecology of Murder

The silver ant of the Sahara can survive about ten minutes in the mid-day sun. Platoons of them crawl up from their ant hills, skitter widely, searching fast, then, when prey's found--a beetle, a tiny lizard--teams quickly re-swarm and rush the corpse back.

Sometimes it's hard to drag the irregular corpses back over the rock and debris while time runs short in the killing sun, so they go hastily to work with their mandibles, sawing off legs and arms to make the dead thing easier to roll back to the nest.

Scale this drama up: If you were a detective and you came upon this scene after the fact what would you see? Arms and legs hastily chopped off, maybe drag-marks, no torso or head.

You could reskin them as anything smaller than their victim--sun-sensitive albino cannibal children, packs of wild dogs afraid of detection. The point is, in their collective haste to get back where they came from they left a distinctive trail of limbs--and that's the first scene of your campaign.
-
- 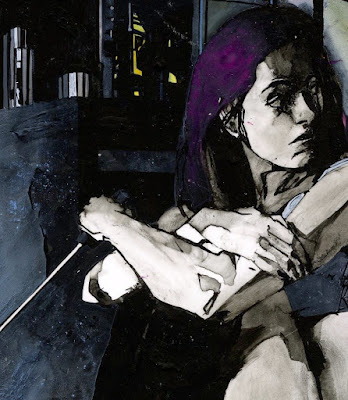 -
-
To make a horror adventure you usually start with the horror--the murderer or monster--and game masters are used to thinking of horrors only in terms of their appearance and their abilities: it looks like this and it does that. In a classic adventure game you can often get away with it: yes, Mr Greenwood the green ooze has a life cycle but the main thing is it's eating your foot and then there's some other monster in the next room--in an investigation, which relies on squeezing every ounce of story-potential from a single monster, the horror needs an ecology.

It doesn't just have that strange look and strange power, it has specific methods--a niche, a consistent way of doing things. In an investigation, knowing the ecology doesn't just provide flavor or depth if needed--it generates the whole adventure. Before you begin, you run the horror through its horrible day and its more horrible night, and imagine what would be left behind--that's what the players then find, and must back-engineer the nature and location of the creature.

Buffalo Bill has his strangely skinned corpses (because he's making a suit out of women), the Murder at the Rue Morgue has ear-witnessing neighbors with conflicting reports of the murderer's language (because it was an orangutan), each of these opening clues comes not necessarily from what makes the horror horrible, but from what makes it itself.

Often this can involve the creature's weaknesses--the silver ants saw off those limbs not because they have some special ability to move their prey but because they don't, and they are hustling hard before the sun kills them. Imagine a creature that could only move in silence--the players might find identically slain corpses off lonely roads and in recording studios (which are soundproofed, yes, but how long before they make that connection?).

Nearly the entire plot of Get Out is just the slow revelation of a specific ecology, despite not starting with a murder. (Spoilers) The daughter brings unwitting but able-bodied black victims to the house, the parents auction off the victims to aging friends, and--aided by hypnosis and surgery--the brains of the villains end up in the bodies of the victims. The "house servants", rather than a rotting corpse, are the first clue.

There is no way to mechanize the process of inventing these ecologies: horror needs mystery, mystery needs the unknown and the unknown means you'll need to think up at least some details on your own. But you'll be surprised how much mystery and horror you can get out of a very simple ecology--grab one at random and try it:

The pitcher plant? It has a sweet nectar on the rim, but in order to get at it, insects inevitably slip down the inner walls and then slowly dissolve in the acidic pool at the bottom. Translate this to a horror scenario in the most literal terms and maybe we have an opening scene with an acid-scarred lunatic roving the streets, smelling like candy. Investigation might reveal a pattern of children who never came back from school, clustered around a warehouse district...

Alright. Now a word from our sponsor...

Probably my favorite post since you started posting Demon City stuff. Opened my eyes to a whole new way to handle horror in my adventures. Good stuff.

On a side note, also my favorite "Word from our sponsor" These people are savages.

I'm glad to hear you liked it--sometimes I take these basic plot ideas so for granted I am not sure anyone else needs to hear them, so I don't write them down.

As for the Something Awful harassment clique--yeah they're genuine psychopaths, though that kind of post is a regular Wednesday for them.

I think it's hard for other people to realize the magnitude of what they do because they don't see it every day like I do and don't get the phonecalls from industry people I do.

The most messed up thing is the number of mainstream game people at FATE/Evil Hat, Paizo etc who support them and carry their signals and repeat their shit uncritically. If I reported everything they do on a daily basis this blog wouldn't be about anything else.

It sucks that you have to deal with this so regularly. I think the above mentioned comment about the harassment campaign pretty much sums them up as a whole. You aren't like them. You write/play/live better than they do. You don't collapse under their bullying like im sure many more of their victims have and you don't let them get away with blasting this hated in their special little groups without shining a public light on them. What do savages do when they encounter something they are unfamiliar with that challenges their delicate/sheltered lives? They fabricate stories of witchcraft and crush them with rocks. Savages.

Echoing Sweetland's statements. On G+ the other day when I mentioned advice in rulebooks, this is exactly the kind of thing I need. What's always been hard to me about running CoC games is that I don't have a fundamental understanding of how to make those adventures work, what to prep, what to bring to the table, like I do with D&D (wandering monster charts, treasure tables, some hex adventures, etc.). So this is incredibly helpful. I'd imagine a lot of stuff you know about running horror games is stuff I'm totally ignorant of. Thanks for putting this out there.

I agree with all of these statements. Having never ran anything other than variations of dnd or similar games (I'm dying to play CoC) I've got no basis of what makes a good horror adventure but I am always trying to implement horror elements into my games. Having the right set of ideas to write an entire adventure with a horror/suspense theme is something that I am always searching for.

What an awesome post, Zak. Thanks for shining a new light on one of my favorite subjects!

As a former biological sciences student, this is one of those "Kicking myself for not having thought of this approach" things :) Great post.