A counter-text is a description of a way to read an existing work so that it has more--or at least other--ideas in it. For gaming, the counter-text should ideally be a short high-concept thing that readily and quickly presents an alternate interpretation of many elements of the original text. It is neither a reskin nor a rewrite nor a list of small changes--it's a clear set of ideas that immediately opens up a pandora's box of reskins, rewrites and small changes.

Here's a simple one: Stonehell dungeon has no floors. That's five words but it does a pretty good job of making the dungeon more interesting: 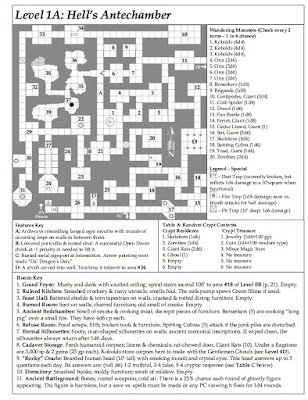 Not only does, for example, Room 8 immediately become a lot spookier and more tactically complicated--the cadavers must be hanging from the ceiling on hooks--it goes a long way toward explaining why Stonehell is full of different monsters so close to each other--they have a rough time getting around.

A more complex example is Ken Hite's recent Dracula module--which posits that the Impaler is still around and that the novel Dracula is an expurgated version of an after-action report about the British secret service trying to recruit a vampire as an agent.

Usually, the ideal game counter-text is somewhere between the two of those examples: simple enough to offer an obvious transformation of any boring, annoying, or underdeveloped part of the original text but complex enough to generate a variety of different ideas.

Sometimes one text can be the counter-text to another... Keep on the Borderlands is well-designed but pretty dull in terms of color and wonder at least until you get past the tribes of humanoids crowded together. However if you mash it up it with the colorful but poorly-designed Seclusium of Orphone...

Ok, so Caves of Chaos is still a bunch of goblins and hobgoblins and gnolls hanging out in a bunch of rooms--but the rooms are a decayed wizard's tower, with lots of tricks, traps, oddities and experiments still intact. The inhabitants are probably still busy poking and prodding them to see what they can take advantage of. That explains why there's an owlbear (a wizard did it) and a medusa (consort?) and why the evil priests are digging deep into the caves in search of secrets. It gives you an excuse to put more interesting things in each room pretty much randomly, and explains why some of it might not have been looted yet. It also explains why these different competitive humanoid tribes are here--they all came to pick it over once word got out the wizard was gone.

It also makes the Keep (where the humans dwell) itself more interesting--all those NPC guys aren't just in a castle, they're occupying another decrepit wizard tower so the goblins and jerks don't take it over...

Or: Carcosa is just a hex map of post-war Eberron. Instantly all those random robots are left-over warforged, the rainbow-colored men can be the Eberron races, the sci-fi weapons are just magitech.

The potential importance of counter-texts in games stems from a few basic facts about games as they stand in 2016:

-There are a great number of RPG texts
-They are often easily available and in many cases their major outlines are well-known to many GMs and sometimes players
-This familiarity is helpful in creating the kinds of shared imaginative spaces helpful in tabletop
-The texts are, by-and-large, fairly detailed and internally consistent
-This detail and internal consistency is useful and time-consuming to reproduce
-The texts mostly suck

...in short, the hobby of gaming comes bundled with a lot of terrible but helpfully familiar software. By injecting the right counter-text, the inherited junk ceases to be junk and becomes a genuine asset.

I'd like to think counter-texts could get more ambitious than anything I've discussed here. Maybe there's a killer idea that can make Undermountain or Castle Greyhawk worth playing, or even turn whole useless games and systems into something worth sinking your teeth into.
-
-
-

So, is a counter-text something like: this is not a dungeon, but a small setting map, corridors are rivers and routes, rooms guarded by humanoids are villages or encampments or forts, and there are no human settlements in sight?

That's a good idea for a combination of The Caves of Chaos and Seclusium of Orphone. I'd read before of using a combination of McKinney's fairly incomplete Isle of the Unknown and the equally unfinished Seclusium, as a fix for the problems with both. Combining Seclusium (or both) with B2 is even better.

One culmination of that might be placing a bunch of decent '70s or early '80s modules on the Isle as abandoned "Seclusia". Then one could also set up the main 13 wizards' towers as currently active domiciles still using the Seclusium rules. The other hexes would probably still need a good bit of work, but that would help a lot with Isle as a setting.

The rest of what you wrote is interesting too, but I have no further comment.