Here is an entry for the Thought Eater DIY RPG Essay Tournament.

If you're new to the contest, it's like this: this essay is not by me--got that Metafilter?--it's by an anonymous DIY RPG writer who was assigned to write something interesting and original about hoary old RPG topics.

Anybody reading is eligible to vote for which one you like best and voting will be cut off once all the votes for all the second round Thought Eater essays are up...

The rules for the second round are here.

The difficulty is I am an idiot and accidentally left this one out when I was rolling out the entries, meaning this one's orphaned. This is how it'll work--if you like it,  send an email with the Subject "NUD" to zakzsmith AT hawt mayle. Don't put anything else in the email, I won't read it. If you don't, do nothing. At the end I'll look to see if it has more votes than the average entry. If so: it goes to the next round. 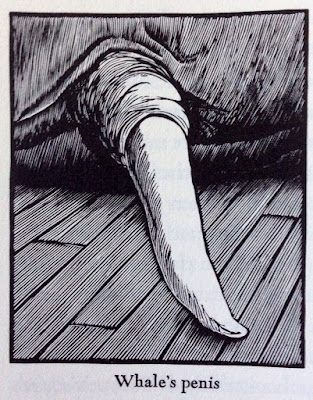 I reread Moby-Dick recently (you have to hyphenate it, it’s like Spider-Man) and I couldn’t stop thinking about how much it had in common with The Call of Cthulhu.

There’s a scholarly young man in New England who lets restlessness and curiosity drag him into a quest for a terrible sea monster rumoured to lurk in the Antipodes. He has a series of adventures, each more spooky than the last, involving half-mad sailors, derelict ships, strangely-shaped animals, the threat of cannibalism and the deep existential terror of having to interact with people from the Pacific Islands. By the time he realizes what a bad decision he’s made it’s too late and he’s pulled inexorably into a confrontation with the monster, which kills everyone aboard the ship except for one man who’s left alive to tell the tale. There’s a bunch of structural differences - Thurston is just reading about the voyage, Ishmael is actually on board - but the narrative progression is the same.

There are a couple of explanations for this. One is Freudian. Cthulhu’s a vagina, Moby Dick’s a dick, sex is a nightmarish leviathan that can never be looked at directly and the Pacific Ocean is the Victorian unconsciousness in which it lurks. As tedious as this kind of thing always is, I can’t help but feel like there’s something to it. More importantly, however, both Melville and Lovecraft had read The Narrative of Arthur Gordon Pym, which is by Edgar Allen Poe and about all the same shit. We don’t have to invent some kind of weird laborious psychosexual code language when we can just say that they liked a book. I like that book and I’m not terrified of women. Melville didn’t write eighteen billion pages about whale biology because he was wrestling with his homosexuality. He probably was wrestling with his homosexuality, but he wrote those pages because he liked whale biology. We don’t have to assume that just because sex is super important, nothing else we do is important unless it can be made to relate to sex.

Now Melville is a much better writer than Lovecraft. This is because he is more specific. Lovecraft will tell you that the monster is spooky and you should be spooked by it. Melville will tell you how a whale’s dick works. There is a scene in Moby-Dick where a guy wears a whale’s foreskin as a poncho. And despite this, Melville’s whales continue to be spooky. Advantage: Melville.

But Lovecraft has a much greater influence over our culture than Melville. Nobody has ever tried to make a roleplaying game about Melville. And I think this is because Melville is more specific. You can take Lovecraft and put him in space or the Himalayas or the grimdark future where there is only war. You can’t do that with Melville. I mean, you can, but there’s like one or two space Moby-Dicks. There’s a million space Lovecrafts. Lovecraft gets in everything, like sand the day after the beach. Melville is less flexible. If Lovecraft is sand then Melville marble. Beautiful on his own, but denser and harder to cut and you need to be much smarter about it if you’re going to make anything out of him.

Lovecraft, because he is not very good, dares you to improve him. The first thing you do when you’re writing a Lovecraft adventure is to make it more interesting than anything Lovecraft ever wrote. Well, the first thing you do is cut out all the racism, but you get the picture. Lovecraft’s work is full of such clever phrases as “the Thing cannot be described”, and when you read one of these you immediately try to describe the Thing. You have to do all the work of making it horrifying yourself. Lovecraft’s not going to help you - he’s just going to tell you it’s horrifying and ask you to figure out the details. And whatever weirdness you come up with is almost always going to be better than whatever Lovecraft is thinking of.

But it’s also not Lovecraft. Because Lovecraft is that shit writing. The implicit challenge of Lovecraft is “can you do what I did, but not shitly?”. And you can’t. So people are constantly Doing Stuff with Lovecraft, trying to Use Lovecraft, trying to make things Lovecraftian, and Lovecraft is constantly in the public eye but never actually supplanted. He can’t be. It always seems like there’s something Lovecraft never quite pulls off, some great achievement that’s persistently evading him, but if you actually achieve that - as Melville pretty much does - you don’t solve Lovecraft’s problem. He wants to pull it off while still remaining Lovecraft, and he can’t do that, because the inability to pull it off is what makes Lovecraft Lovecraft.

This is also D&D. D&D is pretty shit in most ways, and there’s a million spinoffs which are technically better, but you will never get rid of original flavour D&D because what makes D&D D&D is the big hole at the heart of it where something awesome should go. In order to radiate potential you need to not fill that potential. Patrick Stuart says here (http://falsemachine.blogspot.com.au/2013/06/art-in-games.html) that it’s actually easier to notice that a thing has psychic energy when it’s bad. I think this is maybe why. A good thing, like Moby-Dick, has a great idea and then lives up to it. The guy who wrote it did his fucking job. He did all the work and there is no room left for you to do any. But you want to do the work, you feel compelled to do the work, which is why you are drawn towards shit things that have ideas and fuck up the execution. There is something left in them for you to work with.

And I think this also accounts for the persistence of Freud. Freud has psychic energy. Freud actually talks about psychic energy, a little. He has a whole theory of cathexis, which is the process by which the erotic charge that’s supposed to accrue around people you want to bone gets redirected to something else, like a whale or a child’s hat or a piece of wallpaper or whatever. This is clearly stupid. People don’t become obsessed with weird shit because they’re not allowed to fuck their dads. But Freud is all about the unconscious and the inexpressible and terrible forbidden things lurking just beyond sight - the same shit Lovecraft talks about - and his stupid theories about it demand that we try to explain it better. We think we can outdo him, and so we keep coming back to him, and so he’s a constant presence in academia and literature to this very day. We don’t want to explain away Moby-Dick by saying it’s about sex but there’s something in that idea that prevents us from ignoring it. I still felt the urge to talk about Freud at the beginning of this essay. I don’t think Moby-Dick is about sex, I think it’s about whales, but I can’t just fuck the idea off altogether.

You might be more comfortable ignoring Freud then me, of course. That’s fine. The point is, the kind of infuriating vagueness that both Freud and Lovecraft possess can wield a huge influence over us and our creative process, even as we consciously acknowledge that it’s dumb. And also that Patrick Stuart should read Moby-Dick. Have you read Moby-Dick Patrick? I think you’d really like it.
-
-
-

Hey - I love love love this essay and would like to reprint it in a zine I'm making about Lovecraft. Could you put me in touch with the writer? Thx.