David Foster Wallace talking about an early bout of suicidal depression--as quoted in David Lipsky's Although of Course You End Up Becoming Yourself...

...it may be what in the old days was called a spiritual crisis or whatever. It’s just the feeling as though the entire, every axiom of your life turned out to be false, and there was actually nothing, and you were nothing, and it was all a delusion. And that you were better than everyone else because you saw that it was a delusion, and yet you were worse because you couldn’t function.


What's interesting for RPG fans here is: that is exactly how the Cthulhu Mythos stat in Call of Cthulhu works. The more useful things you know about the Cthulhu stuff--the real engine of the universe--the lower your max Sanity. 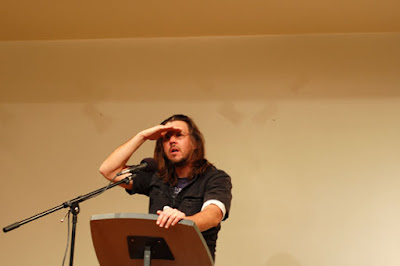 Email ThisBlogThis!Share to TwitterShare to FacebookShare to Pinterest
Labels: books, call of cthulhu

Funny, also kind of the core of the narrative in Zen and the Art of Motorcycle Maintenance and about a thousand other pop philosophy novels.

Shows up in Thomas Ligotti too, the notion that if there is a truth, it's that we're measly appendages of a blind and idiotic cosmic whole constantly creating and torturing itself, puppets with the delusion of self-hood, little thinking nothings.

Though the distinction there is maybe that in Lovecraft, man goes mad realizing the indifference of the cosmos and his insignificance in it, populated and governed as it is by blind idiots of unspeakable power; in Ligotti all that's true, but we're also literal non-entities, fake things that believe they're real, but ultimately just the convulsions of Azathoth's outermost tendrils; man goes mad realizing he isn't man, just the dream of a man.

I always had the disheartening notion that the real world is actually WORSE then the one with all the unnamable abominations. Here you can drive yourself insane or commit suicide upon the utter pointlessness of it all at best, without the nifty secrets, cool occult conspiracies and mind-blowing magic of the Mythos.

I've thought about putting some "Identity" stats in Call of Cthulhu. Where you pick your nationality and race and family background, or you roll it up, and it gives you extra stuff. Now players want to flesh out their identities and ties to groups and history as much as possible.
Then, as the game progresses, you fuck with it.