Some game books, I read them and I immediately want to play.

This doesn't mean what you think it means. I don't mean: I read the book and decide the game is good and better than all the others and has an awesome premise or system. I just mean they have a weird something where I feel like I need to play them, soon, for some vague reason I do not entirely understand that is not related to how much I like the game itself considered outside the book.

Call of Cthulhu is better than Chill 2e in nearly every way, and I will and have run CoC much more than Chill but, to me, the (often very well-illustrated) CoC book is just a book--whereas the Chill book is like play me, play me, play me...

B/X D&D has no special attraction for me over AD&D, 5e or any other D&D (or Warhammer, for that matter)--but B/X is the one where, flipping through, I think I have to playyyyy...

As a system, I like DC Heroes much less than Marvel FASERIP--but the DC book is the one that I just end up staring at over and over. And the new DC adventures with the beautiful color pictures? Don't care at all.

All these books are under-illustrated.

The illustrations aren't bad, and they aren't just sparse (though they are that)--they also studiously avoid the central ideas of the game.

While Call of Cthulhu gives you images of cultists and cosmic monsters pretty early on, here are Chill's first three pictures: 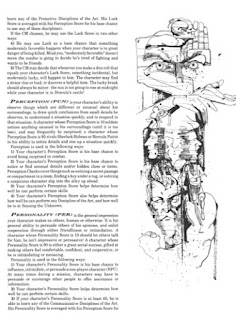 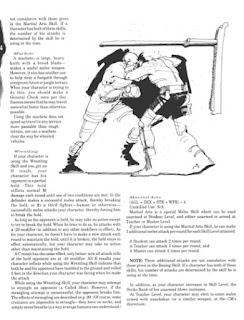 ...utterly competent, yes, but absolutely nothing about horror here. In fact, I don't think there's a single picture of a pc-like character confronting a monster or even a signifier of horror (a bat, a corpse, a clue, a pool of blood) anywhere in the book. 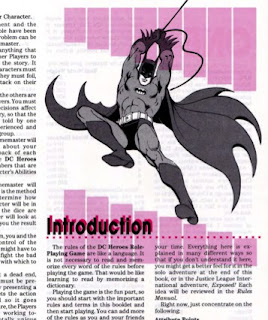 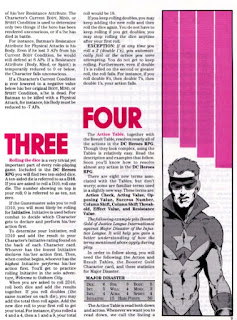 There are superheroes--but they're not fighting villains, evading deathtraps or interacting with the dazzlingly glossy DC universe in any way. They're just there.

These are both from Mayfair--who had a house style--but Basic D&D also has some of this. It has plenty of images of D&Dish characters doing D&Dish things, but the really typical activity--adventurers confronting exotic creatures in an exotic environment--is missing (unless you count the dull monsters in the intro adventure, which I don't, really). None of the pictures are as evocative as that one in the AD&D PHB of the dwarves confronting the magic mouth, for instance, or A Paladin In Hell.

There is a weird knife-edge here for me: no illustration (Shock, Dread) or generic illustration (AW, Top Secret SI) do nothing for me. Great and lavish illustration I appreciate, but don't give me this weird must-play vibe.

There is this teetering feeling that something needs to happen--like a chessboard all lined up, just sitting there. Just as all the sofas and hay bales become ominous as soon as the movie starts because you know it's a horror movie, all the illustrated banalities become animated with possibility when you know they're supposed to result in dazzling murder, confrontations on Apokolips, the domains of Asmodeus.

The alligator is a large, powerful reptile, sometimes growing to a length of almost 15feet. It makes its home in rivers and swamps, and...

...and this is undeniably pointless prose on its own but underneath there's this shadow awareness that spends the whole time you read dreaming up horror-things to do with an alligator.

And something in that is powerful--because RPG texts depend on giving intimations of potentia--that dizzy, wonderful first-page-of-the-novel feeling where things could go in any direction. And when you finally do read the introductory adventure at the back of the book it is always so disappointing where--given all these options--they narrowly chose to take it. Better to spin out the readers dreaming about what's possible instead of subjecting them to the leaden realities of modules and examples where the monster waiting to ambush them is Sturgeon's Law.

I don't know if this feeling is unique to me or, even if it's not, whether it can really be usefully harnessed--who would want to intentionally create the feeling of a half-made thing? And is it even really possible to do genuinely well?

Part of this might just be the simplest trick of literature--describe in words so much more than you can show, creating a semisensed world in the mind--but supplemented with solid pictures of the principle characters to ground everyone at the table in the same reality.

I only know I keep staring at these books, year after year, not running them, not wanting to--really, when I think about it--but feeling like not doing it leaves something strangely unsaid.

Cºntinuum did the exact same thing for me.

I think my mind focuses a bit more on the mechanics and less on the illustrations, but I absolutely feel the same thing with certain books. There is just a potentiality to them, like when you've first dumped out all your legos as a kid and are thinking "OK, so what am I going to build now?"

Those are my favorite RPGs to just read.

Thanks, for writing this piece, for some reason
the thoughtfulness of it provokes further musings of my own. not the normal gamers blog!

I feel the same about the entirety of Dream Pod 9s RPG output.

Interesting ideas. I have also wondered sometimes why some games beg to be played, and the visual queues are an interesting hook indeed.

I think I need to go back and look again at some other games that evoke that feeling, as I agree about Chill and B/X (don't own any superhero games).

Paranoia 1E, the classic box set, does this for me. The rules are weird (Skill trees?) but pulling out the three core books (player, GM, adventure) with the two-color printing just makes my hands itch to play it... Jim Holloway's classic art is fantastic too!

I have the same feeling with the old palladium books (Mechanoids, BTS...), but I know why, the 80's cartoon look and the fact that it sometimes feels like a toy catalog, it really speaks to my 12 year old self (really).

"the monster waiting to ambush them is Sturgeon's Law."

This may be one of my favorite things you've ever written.

Possibly because your job requires reading 90% of everything about things.