Getting My Teeth Kicked In By Adrian Smith

So I just finished drawing this for the upcoming Amazons of the Devoured Land...
...astute readers will notice, in addition to making people fight in heels and my utter failure to make the figure on the right fit a D&Dish time period, the distinct Bisleyishness of the amazon on the left.

Which is strange since what I was trying to do was rip off not Simon Bisley but Adrian Smith. Specifically this image from Realms of Chaos: Lost and the Damned... 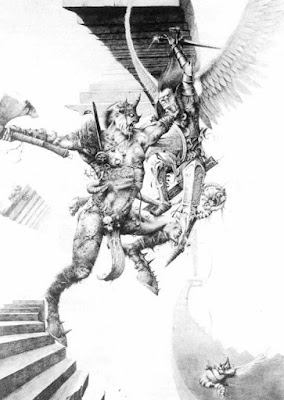 ...an image which I have discussed at length before.

I haven't done this since school--attempt to copy another artist. My aim was to try to not just pay homage but hopefully to learn something by doing it. Maybe I did, but purely in terms of competing with the elder Smith, I failed utterly. The interlocking and silvery precision of his delivery is nowhere to be found in that big flat stomping yellow picture I made.

But I thought it might be useful to talk about how it went:

I started on the far left with the weapon and this already kind of doomed me: while the axe has to just sit in the chaos champion's hand, the flail has to strongly give the impression of movement in order to make sense in mid-air like that, necessitating a pose which more accentuated the movement of the arm and shoulder.

Ok, no biggie, but that immediately runs into a more fundamental biomechanical problem. Adrian's aggressor has those goat legs and even though the implied movement of the figure is from left to right (as if leaping off the stairs into the opponent), the entire figure actually follows a subtler logic: we look at the goat legs and we sense a sort of elastic movement--like the implied contraction of a chicken wing--and that together with the slightly bent arm and the elongated, stretched torso imply not so much a movement that goes toward the figure on the right but more a kind of clawlike contraction of the entire left-hand figure, squeezing all four limbs together and bringing the winged champion on the right toward the center of the horned champion.

You can see how the picture works by putting your hand over the lower half of the axe guy--the movement in the picture suddenly seems very different and it seems like he's kind of victoriously flinging his hands outward rather than bringing the wing guy in for the kill/ The goat legs make the picture feel like it's going to snap and squeeze the entire composition inward toward those dark spots created by the heavy shadows in the center of the lefthand figure's torso.

Now my amazon not only lacks goat-legs, but I had sketched in most of the figure before I realized how important this kind of elastic motion was to making Adrian's picture work--so I couldn't compensate by trying to contort her into some analagous position (which might've been possible with the right clothes or pose). This turns the straight, outflung arm on the left into not so much a minor variation on the bent one but a symptom of the fact the picture needs a new focus.

So I moved the amazon's right arm out of the way--this made it look more like the other figure had just been hit rather than (as in Adrian's) the hitting was about to happen. The right-hand figure wasn't being held up, she was being knocked into the air.

The very loud and heavy way the amazon's planting her foot is a result of this change--she has to be grounded in order for her body to seem to be supporting the intensity of that smack.

A more serious problem than having to re-wire all the biomechanics halfway through concerns Adrian's use of texture. There is a thing that terrible fantasy illustration does where muscle and natural textures conspire to offer a kind of all-over gleaming look, with no real shadows or center of interest, and it all just kind of blahhhs out. Late 80s TSR was the apocalypse of this. Frazetta and other good artists avoid this trap by carefully weighing where the lights and darks fall to give a more post-photographic (or post-cinematic) look. Adrian avoids that pitfall here by carefully shadowing down from a range of grays into a few intense darks on the shoulder guard, armor, lower legs and in the scars and details to give the picture drama--the modulation is extremely subtle.

Now I'm using a pen and some grey ink instead of a pencil. If you compare, for example, the horned figure's hair to the shadow on the side of the same figure's shoulder armor... 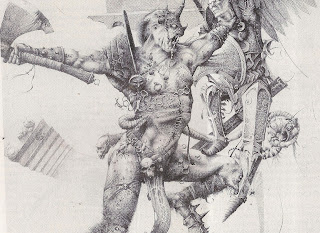 ...you'll see the hair doesn't actually go all the way black. And if you look really close you'll see that inside that shoulder armor shadow, the top third is a slightly paler gray than the black beneath. These effects are small, but all together it's careful tonal shifts like these that make the picture seem to writhe with movement and shadow.

Not only that, but the axe guy's weird texture is central to making the picture work, and the curvy babe I drew requires much bigger and more regular tonal shifts (shadow here, highlight here) in order for her body to make sense. If you cover up the monster's lower goat leg, the upper thigh on the left doesn't look all that round--but who cares? He's a gross monster. I don't have that liberty if I want the amazon to look babely*. So I can't really make my picture follow the same texture scheme--though I try to get flatten her out visually a little by covering her with as many tattoos as I can get away with and still have a legible picture.

But the overall tonal problem is still there--by the time I got this far in the picture, the picture I've got looks suuuuuper cheesy and it's depressing. It needs something new to replace the visual complexity I've lost going from pencil to pen and from monster to maiden--so that's when I brought in the color and the heavy shadows. I stopped trying to plumb the cruel mysteries of Adrian Smith's rendering and just went about trying to make mine serviceable by finding another avenue down which complexity could creep.

So, yeah, that's how it came out like that. Try again next time. 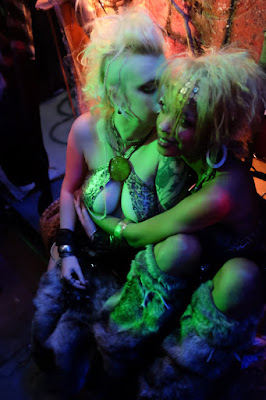 What are you using for media? There's obviously pen and ink, but the sky and the leopard spots have more of a watercolor or thinned acrylics look. No clue what you're using as a canvas (except that I don't think it's literally canvas).