Maze of the Blue Medusa FAQ

Tomorrow I'll probably write about how one of our party's clerics was invited to the White House today, but she's driving right now so I don't know the details yet.

Meanwhile here's an FAQ for our new thing: 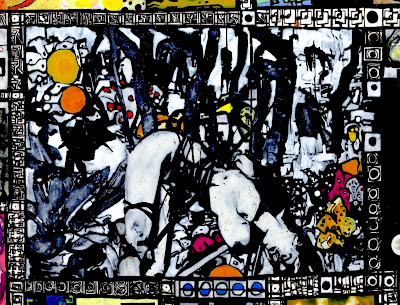 What is Maze of the Blue Medusa?

It's a big dungeon module for any kind of D&D-like game by me and Patrick Stuart coming out soon from Satyr Press.

I made a big painting of a dungeon, then Patrick went through and wrote descriptions for all 304 rooms of it, then we both went in and rewrote parts of it together. In the end, I wrote some, Patrick wrote some.

The initial graphic design ideas came from Kirin Robinson who did Old School Hack, but when he got busy with real life the project was taken over by Anton Khodakovsky.

Is this Patrick any good?

Patrick is a magnificent writer. He wrote Fire on the Velvet Horizon and Deep Carbon Observatory. 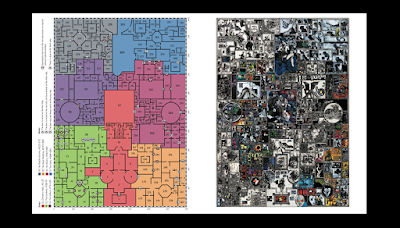 What is this Satyr Press?

It grew out of Sator Press--a little literary press run by a kind-of-famous guy named Ken Baumann who is also involved in the DIY D&D scene. They have lots of experience printing books and getting them to people, but this is their first RPG product.

Why isn't this done with Lamentations of the Flame Princess--did you and James Raggi have a fight? Is there gossip?

Nah--it's just this is a massive project (3 or more years in the making) and James already had a lot going on. The Maze was going to require some very expensive graphic design and personal attention to work properly and Satyr was like "Is it cool?" and James was like "It's cool".

Plus, LotFP is consistently trying to do stuff that's a little more historical 17th C and weird-fiction and relying less on D&D tropes and this is, at the end of the day, a big fucking dungeon full of medusas and liches and shit.

Plus everybody involved is pretty excited that there's another company willing to do boundary-pushing DIY D&D projects. 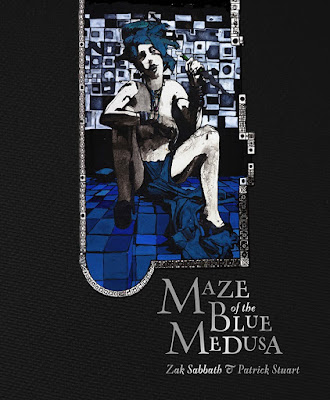 When is it out?

The graphic designer has the typos and is fixing them, then we go to print, so I am guessing this spring maybe early summer. But book stuff is cray so don't quote me.

Yes. I haven't finished all the art for Amazons yet--which LotFP is putting out.

What levels is it appropriate for?

What system is it written for?

It's basically system-agnostic, but there are stats like so-- 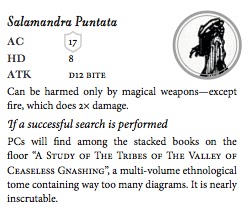 ...it's basically on an AD&D scale but with ascending AC.

How big is it?

Hardcover, 304 rooms, pages in the high-200s, though in order to make it easier to use than the standard megadungeon, a lot of pages repeat content for convenience sake. 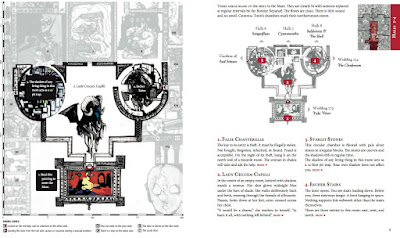 Will this book be that megadungeon-done-right that follows on your critique of how these things are usually done?

Mostly. My original platonic ideal megadungeon would probably have shorter room descriptions (like the dungeons in Red & Pleasant Land) but Patrick's writing on the initial draft was sooooo good that we kept it long.

You can't run this dungeon without reading it first, but the way we wrote it hopefully makes the whole thing unfold like a story and, so, when you're running the dungeon that'll hopefully make it a lot easier to remember what a thing is and what it does and wants when you see a picture from the map. 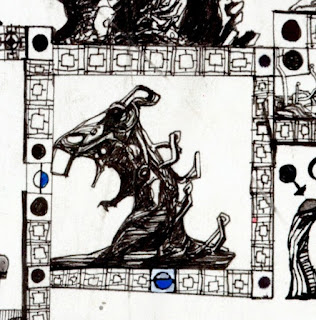 What is you critique of how megadungeons are usually done?

Graphic and information design requiring too much page-flipping, goofy themed bullshit that's basically just dad jokes, rooms that are just monster-zoos with no real problem solving, fighting the same creatures over and over, rooms that just aren't that interesting and were written in bulk, low ratio of ideas-to-word, funhouse shit that goes way off-theme and doesn't make sense even if a wizard did it, too few factions in the dungeon, events in different parts of the dungeon don't affect each other, few ways to use the dungeon against itself, lots of other stuff.

tl;dr there's a medusa down here and she has treasure but there's also monsters and traps and shit.

There is a rumor of an empire, ancient and lost to time. An Empire ruled by three perfect women who could never do wrong, and who would never die. And though they were beautiful, ageless and merciful, the kingdom that grew around the Triarchy was the most monstrous yet made. A tyranny of torture and pain that could never end while the three immortal sisters lay at its center like pearls in a poisoned shell. Until one day it did. The women disap- peared and were never seen again. The Empire slowly faded and fell, leaving only a memory, like a nightmare recalled at dawn.

There used to be an empire ruled by three perfect women. One could not be harmed and would never age, one was loved by everyone who saw her and one prevented anyone who met her from doing harm to another. Outside of its inner court, the empire was horrible, murderous and psychotic. People working for beings they knew to be perfect went mad. But the empire could never end because the three people at its core would collectively never age and no one who met them would, or could, ever harm them. So the world was fucked.

The Three sisters lived a kind of cosseted, disconnected existence, generally unaware of the horror that occurred outside of their direct presence, technically in charge, but with no real control.
With no way to end the empire, a group of its highest functionaries, with very mixed motives, devised a plan. They would take the three sisters to the Maze of the Medusa and hide them there. The Medusa Psathyrella was already a kind of jailer of immortal threats, her Maze is almost impossible to find, she is the only person clever and cold-hearted enough to keep the sisters prisoner without being seduced by their various perfections.

Having succeeded at their plan, everyone ends up much more trapped than they intended to.
In the world outside, the Empire fell apart and currently exists as a kind of legend of the distant past of the world the players come from. 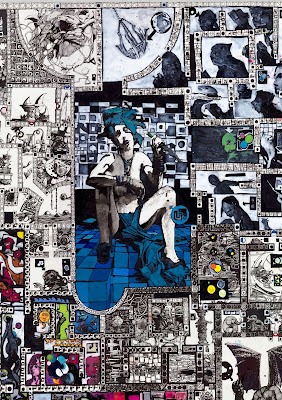 You know 'medusa' is a proper name, right? The species name is 'gorgon'?

I really like this art, is it available as a poster, shower curtain or high-quality printed decorative throw pillow by any chance? 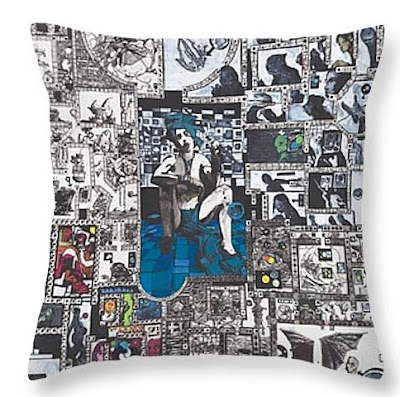 Do you have an estimate for how much the module will cost?

Barring a personal apocalypse or two this is a day one purchase, no question.

How long did it take you to finish the original painting? Was it conceived piece by piece or did you already have the broad strokes in place before you started?

you'd have to ask Ken I'm not sure yet

painting took three or four months and I had no plan

The painting is a few years old right? Didn't you make it for/after a dungeon you were running at the time?

the painting is old but i just made it, it was just a picture until Patrick wrote his first draft.

This looks so great! Love your pic and now as dungeon hack...that's awesome!

Will this be only avaliable as book or as PDF, too?

Exciting work. Is the map itself expected to be fold-out or separate from the book?

i don't know about pdf

its part of the book

Fantastic! I hope it's a decent sized print run... would hate for this to sell out before nabbing one.

Speaking of, where will we be able to purchase it? Satyr.press has a mailing list but no store that I see...

It'll be an expensive book to print, so we're probably going to charge $50 for it.

Hey Logan! There'll be a pdf.

You'll be able to purchase copies directly from me/Satyr via Gumroad and/or Paypal.

All the more impressive then.

Entirely unrelated, but I saw this miniature earlier and thought you'd appreciate it:
http://www.hfminis.co.uk/shop?product=blanche~hfh096&category=fantasy-%26%0D%0Asteampunk~fantasy-humans