Duct-Taping The World Together

Ok, so this is kinda nuts...
What you are looking at is the worldmap of our campaign that Connie drew with the numbers 1-3612 overlaid on top of it.

Now why would anyone want to do that and, more to the point, why would they then get excited enough about doing it that they then decided to write a whole blog entry about it?

1. Ok, so it starts off with the 3.5 Majestic Wilderlands Boxed set, which is several gazillion pages of Sword & Sorcery & Sort of A Stab At Some Sort Of Geopolitical Plausibility sandbox.

Advantages: It is large and has many entries.

Disadvantages: Like nearly all game products ever, it is formatted all crappy for use at the table, many of the entries are boring or written by hippies, the entries are subdivided into several different sections,  and a lot of hexes have nothing in them, which makes it less than ideal for any kind of campaign other than a "let's explore every single hex and see what's in it" type game.
2. So Awesome DIY D&D Computer Sorcerer Ram took this monstrosity and, using advanced negascience, reduced it to plain text and eliminated all the paragraphs of useless stats which bloated the fuck out of the thing. 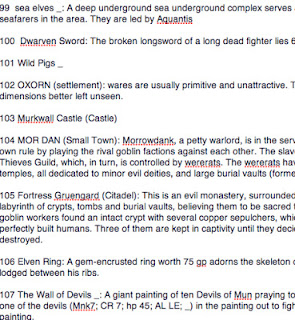 3. I then sat on it for a few months fixing it up lazily when I had nothing better to do: auto-search-and-replacing boring monsters with interesting ones (giant otter---> flail snails), Wilderlands-specific cities to ones in my campaign, Wilderlands races to local races as well as chopping out egregiously boring entries, throwing in stuff from various blog sources (Hexenbrachen, some stuff Jack Dungeonsque wrote, a few of my own hexes) and generally putzing about with it. I got about 1/5th of the way through. It's a big fucking boxed set.

4. I then took it and had my computer do a search-and-replace for "any 4 digits in a row" and replace with nothing to get rid of every single hex number.

5. Then I used this on-line widget to renumber each entry from one so there were no skipped hexes (tech note: I also had to remove all the line breaks between entries first). This reduced the entire Altered Wilderlands to 3612 entries.

And, no: the geography doesn't necessarily make any sense now, but not in any way that can't be fixed by changing "isle" to "tower" and vice versa now and then.

6. Now what you'd wanna do, ideally, is use Co-Awesome DIY D&D Computer Sorcerer Random Wizard's method to turn my map into a hex map. Like you can do with the map from the Divine Right boardgame, like so...
...or with Iceland... 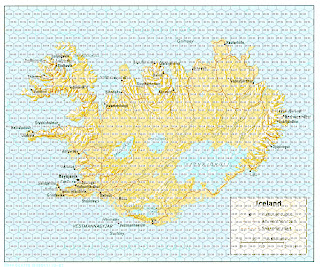 While I'm sure there's some better way to do this (like write a program that numbers things 0001-0030 then skips to 0100-0130 then 0200-0230 etc), I just decided hey, fuck hexes and had this widget generate a continuous list of numbers, used this widget to format it the way I needed and pasted these numbers on top of Connie's original map in a text box. Which is what's at the top of this here blog entry.

(This was way harder than it should've been had I employed actual computer science because for some reason getting the numbers to line up by changing the font size does insane and seemingly random things to the spacing--thus the numberless band around the latitude of Vornheim on the map--so there was a lot of dumb trial and error.)

7. But whatever anyway what we have in the end is a map where every single point on my campaign map has something in it. It may be something dull ("Ocleots: 2") or something that'll need some work to be playable ("Unicorns _: A group of 3 unicorns has made a temporary lair in this open plain. One of them is badly injured. They have little to offer as a reward for help except to allow their saviors to ask one question about the good gods.") but there's something.
__

Some nice things this:

-Every time I get (or steal) an idea anywhere for any part of the campaign, I can just type it into the existing key in the right hex. See something I like in Barovania? Just cut it and paste it somewhere, then read the surrounding hexes and figure out how it fits in when/if it becomes important.

-Any kind of trip between A and C is guaranteed to have some kind of B in the middle.

-I can cut out chunks of the text and search-and-replace for each ecosystem.  Like once you get into the 3300's that's all tropical, so replace "wolf" with "leopard" and up in to 0000's replace "leopard" with "snow leopard".

-All the utility villages where you can buy supplies or rent henchmen are already on the map without me having to make them up.

-I'm the GM and I don't know what's in most of the world. I love that.

So, where the heck can we get our hands on the text file mentioned in #2 so we can imagine the fuck out of it?

I've been hunting for a simple way to hex key my current Warhammer Fantasy campaign map. This may just be the solution.

"The Sea of Ignorance and Pain"

The fishing is that bad?

Giant Otters are a rare and wonderful touchstone: finding them means you *might be close to the resting place of the uncorrupted body of Cuthbert (needed to re-enchant his shrine in the sidequest)